REVIEW: Breakthrough is a well-intentional divine drama that's deemed a serviceable sermon in its melodramatic miracle 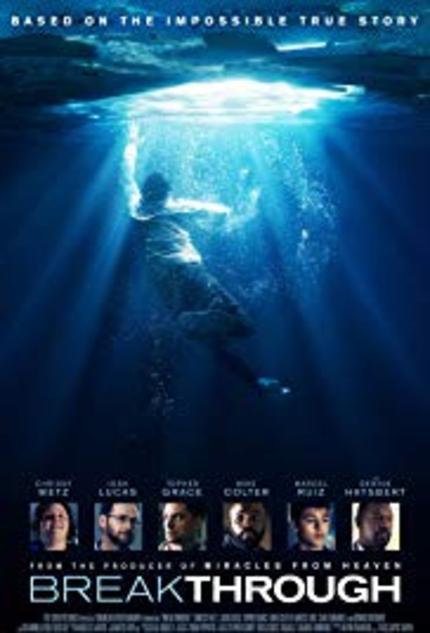 Faith-based Christian films are one of the more readily defined type of subgenres in cinema where the theme is rather self-explanatory in terms of its spiritual foundation. In director Roxann Dawson's divine and soul-searching Breakthrough, there is no doubt about the emotional and psychological padding applied to this absorbing account of one grieving mother's power of prayer being applied as her strengthened tool of hope. Indeed, Dawson's poignant display of healing and salvation are the given ingredients within a captivating narrative extolling its virutues on miracle-inducing happenstance.

Unfortunately, faith-based films steeped in Christian doctrine do not have a universal appeal and can sometimes trigger cynicism and disdain for those that feel overwhelmed by its confining preachiness. Still, Breakthrough is warmly inviting for its ability to be honest, moving, melancholy, and deliver its truthfulness in profound revelation. Anchored by solidly heartfelt performances steeped in the holy belief system of faith and perseverance, Breakthrough registers as a viable sermon despite some lapses of mawkish moments buried in the film's pronounced sentimentality.

Dawson and screenwriter Grant Nieporte ("Seven Pounds") are working from Joyce Smith's uplifting novel. In fact, Joyce Smith is portrayed by Chrissy Metz (from TV's "This Is Us") as the tormented mother in quiet despair whose teen son John (Marcel Ruiz) suffers a life-threatening medical conditioning after a January 2015 fatal accident. As devastating and overwrought that Joyce was as her jeopardized son's life remains in critical balance, she had the spiritual fortitude to believe in his eventual wellness. Hence, Joyce is absolutely far from being considered a non-believer.

The backstory concerning the true story of  the St. Louis-based wife/mother is crystal clear: Joyce is a devout Christian whose domestic life seems ideal for her, hubby Brian (Josh Lucas) and 14-year old offspring John. However, Joyce is not too thrilled with the creative antics regarding the new young pastor named Jason (Topher Grace). In Joyce's eyes, Jason is not the traditionalist church leader that she deems respectable...at least by her standards anyway. Nevertheless, Joyce sticks to the code of propriety when it comes to how she wants her services conducted accordingly at church.

Soon, Joyce's immense faith and patience will be tested when she learns of the precarious incident at the icy river where her son and two other boys were playing until they fell through the crack of the ice into the deadly frozen water. Thankfully, the two other boys escaped but poor John was not as fortunate as them. John is submerged underwater for an incredible fifteen minutes before emergency workers were able to get to his non-functioning body out of that deep-freeze drink. Tommy Shine (Mike Coulter) gets to Tommy but desperate attempts to revive him at the scene are seriously futile. In fact, at the hospital the on-going efforts to resuscitate the seemingly lifeless body of the endangered boy is also not producing any results. The question remains: is John Smith not long for this life after all?

Obviously, the supportive yet disillusioned Joyce is holding a vigil over the weakened John's hospital bed. Feeling the need to summon God's almighty help in sparing her baby's livelihood something miraculously happens--John regains a pulse. This now gives renewed hope for devoted Dr. Garrett (Dennis Haysbert) and his staff to save John courtesy of the medical "miracle" afforded the bed-ridden youngster. Between the professionalism of the hospital's team of resilient healers and Joyce's on-going plea for the power of prayer in the Lord's name the chance for recovery is risky but hopeful.

As with some based-on-a-true story Christian films such as Miracles From Heaven, Breakthrough can incorporate elements of weepy-eyed manipulation and skepticism given the Almighty word drenched in self-righteousness. Still, actress/filmmaker Dawson's disciplined direction and Nieport's serviceable script never allows the film's compelling complexion to mimic anything trite-inducing in its poignant presentation. There is a genuine feel-good charge that one experiences when observing the side-by-side components of spirituality and humanity attached at the hip. The potential messaging of believing, hoping, and praying is never over-played in its absurdity or heavy-handedness. The cards on the table are straight-forward--this reflective narrative resonates because it is about a faithful woman sticking to her unshakable religious value system and letting her trust act as her tool of salvation.

For the most part, the real redeeming force in Breakthrough is Metz's compassionate, capable performance as a God-fearing mother steadfast in finding her faith and source of encouragement while fortifying her spiritual psyche. Television viewers are used to witnessing Metz's resourceful acting chops on a weekly basis in prime time network TV. So it is no surprise that the gifted actress can aptly convey the triumph and tragedy of a resourceful mother's inner strength for peace of mind. The supporting players in this divine drama are spot on in terms of their characters' sense of urgency and purpose.

Breakthrough resembles somewhat of an extended Hallmark cable TV movie that some will immediately dismiss as a tainted mark against its questionable big screen existence. So be it. But by the same token, one cannot dismiss its impactful reach as an affecting showcase for its dimensional divinity in heart, spirit, and soul.