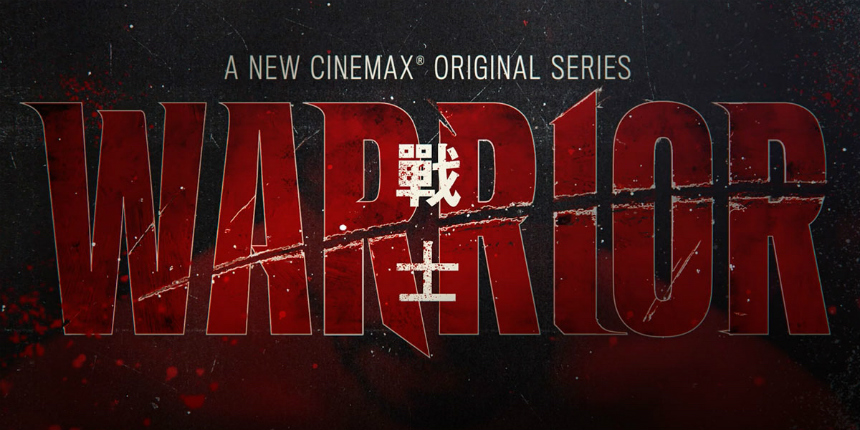 Recently I discussed Cinemax's Warrior with Andrew Koji, who stars as the main character Ah Sahm in the show. The series premieres April 5th on Cinemax; it is based on the writings of Bruce Lee and is officially sanctioned by Shannon Lee (one of the Executive Producers) and Bruce Lee Enterprises.

I understand that you are from the UK and are also a writer in addition to being an actor. How long have you been an actor/writer, how did you get started, and were you working on projects in the US or the UK or a combination of both before WARRIOR? How has your mixed Japanese and English heritage influenced your career as well?

It was always my ambition and intention to act and make my own films. I started making films when I was a teen and started doing extra work and small stage jobs. At 18 I moved to Thailand as they were making a lot of films there and I was still training in martial arts so I did some small jobs there.

Then I moved to Japan and ended up working in front and behind the camera for a while before I decided to come back to London to train as an actor. I trained at a small studio school, the Actors' Temple in London, and have over time started getting more jobs in theatre and TV. So far I haven't worked in the US. In the UK I would say my dual heritage has not particularly been advantageous. Opportunities for East Asian actors at the time was and still is quite limited - although things are changing.

How did you first get involved with WARRIOR, and how did you eventually get cast as the lead character Ah Sahm?

It was the usual route. Although at the time, I had just finished a very tough theatre job and hadn't done any TV in a while. I was about to turn 30 and was seriously considering a change in career. My agent and my mother convinced me to submit a self-tape for the role.

Shortly after doing that I was invited to LA and cast with Alexa Fogel, a great casting director and now friend. They were looking for an actor who could also do some martial arts and there were a few of us under consideration. I didn't think it would go my way but something just clicked when the audition happened

After getting cast as Ah Sahm, how did you prepare for the role? Did you do your own analysis/examination of Bruce Lee's writings and work? How also did you approach a role, acting-wise, that you knew Bruce Lee essentially wrote for himself?

I actually didn't grow up with Bruce Lee as an influence, unlike quite a few of my friends. Both in the run up to the LA audition and after being cast I read up, watched and researched as much as I could about him and wish I'd known more about him earlier as he is such an icon.

While in LA I had the privilege of meeting his daughter, Shannon Lee, who provided some valuable insights. My preparation for the role was pretty comprehensive  - apart from research into Bruce Lee, it involved nutrition, fitness, martial arts training etc. Acting-wise I can only bring my own performance - which is the same for any actor taking on a role already written for or performed by someone else.

His saying 'have faith in yourself, do not go out and find a successful personality and duplicate it' resonated with me, that I needed to make Ah Sahm my own. The directors and Jonathan Tropper helped me find the way too.

The fighting scenes (at least from the trailer) seem extremely polished and dynamic, and the amount of training you underwent for the role clearly shows. Can you specifically describe the martial arts training you did? Do you have a prior martial arts background? Did you also incorporate any of Bruce Lee's Jeet Kune Do concepts or martial arts philosophies? Did you do any research into Wing Chun or any other forms?

Thank you. As a kid I did quite a lot of martial arts. I was also interested in gymnastics and learned to tumble, do backflips etc. I stopped all that by the time I was about 20 because I preferred to concentrate on acting and making my own films.

When this role came along I was reasonably fit but totally out of practice regarding martial arts. Obviously I wanted to get as fit and as skilled as possible in the few months before filming. I made my own exercise/training regime while taking classes from expert martial artists in London and guidance from Brett Chan, the stunt co-ordinator. Training involved Wing Chun with a great teacher, Jack Kontou,  as well as Shaolin Kung Fu and kickboxing.

Without spoiling anything, how would you describe the character of Ah Sahm and his storyline, especially with respect to the other characters from the show, such as Young Jun, played by Jason Tobin; Ah Toy, played by Olivia Cheng; Father Jun played by Perry Yun; Li Yong played by Joe Taslim; Bill O'Hara played by Kieran Bew and others? Are there any particular character relationships we should pay attention to as the show progresses?

All I can say here is that Ah Sahm, a recent arrival from mainland China, has to find his way in the new world of America and the Chinatown of San Francisco in the 1880's. He has to find his niche but it often seems like it finds him. It is also a steep learning curve for him.

His interactions with the other characters depend on his perceived 'status' - new kid on the block, exceptional fighter, family member, lover etc. As in any good story, the relationships develop and change with events over time. You'll see how things twist and turn as the series continues.

But there are other angles too, such as Bill O'Hara and Dylan Leary's stories (brilliantly played by Kieran Bew and Dean Jagger respectively), which have their own dynamic and add a further dimension of interest.

What are your thoughts on the writing of the show, and also the involvement of Jonathan Tropper as the creator? Was there a vision for Warrior that the whole cast and crew intended to convey before and during shooting?

I've got to know Jonathan over the course of the year and in my opinion he's brilliant and an amazing human being. He is the ideal person to be working on this series as, quite apart from his creative talent, he has long been a serious admirer of Bruce Lee and his achievements. He is also a great collaborator and before filming he shared his vision and passion for the series with all of us.

Can you describe the process of working with Justin Lin? What episodes did he direct? Did he also have an overall vision for WARRIOR as Executive Producer and did he share showrunning duties with Jonathan? Also, other listed directors include Kevin Tancharoen and Lin Oeding; what was working with them like?

Justin Lin keeps his finger on the pulse of most aspects of Warrior. I have found him really supportive and encouraging and I'm very happy to be working with him on the show. Changing directors for different episodes can sometimes be challenging for the cast as you have to quickly adjust to a different energy and different ways of working. Having said that, most of us really enjoy that challenge and appreciate how it spices things up for the benefit of the show as a whole.

What do you think makes WARRIOR unique, story-telling wise, acting-wise, action-wise, compared to what has been done before? Also, what are you feelings involving being able to bring to life something that Bruce Lee wrote, and having Shannon Lee and BLE (Bruce Lee Enterprises) officially involved and on board?

I do think Warrior has a unique blend of elements. The action scenes are stylized, brutal and visceral in places but all varied, high energy and fun to shoot. We wanted to keep the fight scenes raw and grounded, with no wire work.

The set of San Francisco's Chinatown at the end of the 19th century is amazingly realistic and historical facts and attitudes are there in broad brush strokes as well as some finer detail - but obviously there is a lot of poetic licence and creativity around that. The series is based on Bruce Lee's ideas - he didn't leave a full script.

We all feel privileged to be working on it and everyone wants to do justice to his legacy. We know we won't please everyone but we feel we have done him proud and Shannon Lee is with us all the way.

What are you working on next? Are you currently shooting the next season of WARRIOR as well? Did Cinemax pre-order multiple seasons or were they impressed with the first season to the point of green-lighting more episodes? Do you have any non-WARRIOR related projects in the pipeline?

After the season ended, I did some TV work in Canada and the UK. I want to keep stretching myself as an actor and do things outside the action genre. I'm working on something right now, which I'm not allowed to disclose yet!

Do you feel this content is inappropriate or infringes upon your rights? Click here to report it, or see our DMCA policy.
andrew kojibruce leecinemaxmartial artswarrior