SXSW 2019 Review: TREAD Tells the Wild Story of a Bulldozer Rampage in Colorado

Paul Solet directs a substantive, visually rich documentary with the dynamics of a narrative thriller. 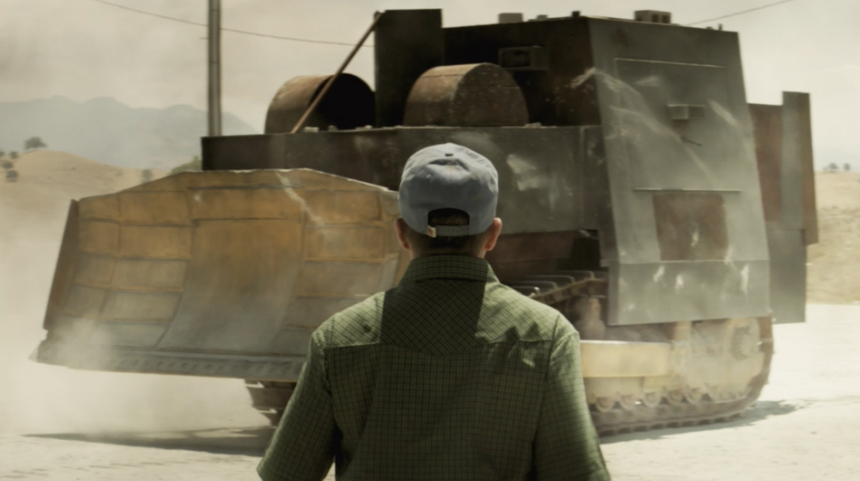 On June 4, 2004, Marvin Heemeyer--a businessman and an Air Force veteran--started up his Komatsu D355A tractor. Prior to the date, Heemeyer spent countless hours building a virtually impenetrable concrete-and-steel shell around the top of the tractor. After firing up the mammoth machine, Heemeyer crashed and smashed his way through the town of Granby, Colorado. He destroyed numerous vehicles and buildings, including the Granby town hall, and fired a 50 caliber rifle at both the police and some very large propane tanks.

Many years after the fateful events in Granby have faded from the public conscious, Paul Solet (Grace) revisits the killdozer incident in a fantastic documentary called Tread. Based on a non-fiction book by Patrick Brower, Tread is a substantive, visually rich doc with the dynamics of a narrative thriller.

The film is built around an audio-taped confession that Heemeyer made before he went off the rails. Using this foundation, Solet assembles original interviews, news footage, meticulous reenactments, and drone footage into a fluid whole. The buildup is slow, steady and detailed.

Viewers' expectations about Heemeyer's motivations for the rampage are constantly upended by shifting perspectives. Although the story's ultimate conclusion is not a mystery, the climax is intense and powerful as the reenactments of Heemeyer's rampage, including scenes using a reconstructed version of the Komatsu tractor, are tightly interwoven with news footage, and interviews with the people who witnessed the events first hand. The effect is to make viewers feel as if they are part of the mayhem.

It's the reality of the current market place that most people who see documentaries catch them on video-on-demand or cable television. However, Tread is a documentary that really needs to be seen on a big screen for full impact.

Do you feel this content is inappropriate or infringes upon your rights? Click here to report it, or see our DMCA policy.
documentaryKilldozerMarvin HeemeyerPaul SoletSXSW 2019Tread