SXSW 2019 Review: The Hills Have Ayes In Hilarious Scottish Thriller BOYZ IN THE WOOD 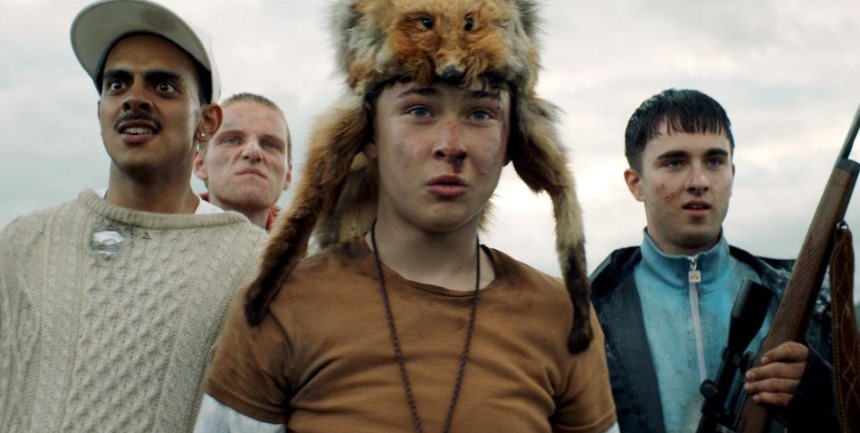 A trio of teenage miscreants are given one last chance to turn their lives around by completing the Duke of Edinburgh Award trek across the highlands. Along for ride is one little overachiever who is in this for the opportunity to pad his CV. They don't have anything in common, but the ragtag quartet are dropped in the middle of nowhere with nothing but a map and they have to work together to reach their campsite before dark. However, they aren't as alone as they think, and soon they are being stalked by wealthy aristocrats playing The Most Dangerous Game, and they only have their wits to protect them. With this crowd, that's going to be a challenge.

Boyz in the Wood takes this basic premise and wrings it for every last drop of comedic potential possible in delivering a hilariously horrific time. The four boyz, chavish Dean (Rian Gordon), the dunce Duncan (Lewis Gribben), delusional rapper DJ Beetroot (Viraj Juneja), and the goody-two-shoes Ian (Samuel Bottomley) stumble across the wide open spaces into one potentially deadly situation after another, only managing to survive by the skin of their teeth. On their trail is a pair of unnamed mask-wearing hunters who enjoy taking out the Duke Award teens for sport every year in the name of "culling" undesirables from Scotland. Imagine a slightly funnier Eden Lake - I kid - and you might have an idea where this is going.

Along the way the boys get to know each other and learn that not everyone can be defined by their worst traits, oh, and they also learn of the hallucinogenic powers of highlands rabbit shit, a quirk of the land that leads to a ton of visually inventive fun. Boyz in the Wood is very careful not to mock its characters in a way that is unforgivable, even though on the surface they are all the kind of boys that get looked down upon or even worse, looked over entirely, in their day to day lives. Here they are allowed to be heroes as they careen from one crisis to the next over the course of 24 hours.

While they are busy fleeing for their lives, the local police have been alerted to some kind of hubbub in the highlands, leading to some truly hilarious Keystone Kops-esque shenanigans from the duo of Sergeant Morag (Kate Dickie, The Witch), and PC Hamish (Kevin Guthrie, Fantastic Beasts and Where to Find Them), who quickly jump on this surprise adventure after spending weeks on their previous hottest case, a local bread thief. This little side quest makes for a ton of laughs as the pair's desperation for something to do quickly ramps up to comedic crescendo when they determine that the disturbance they're after can only be the work of terrorists, or worse. Meanwhile our heroes are still on the run from the hunters in jodhpurs, all the while learning about themselves, each other, and the land.

Boyz in the Wood is definitely one of the highlights of this year's SXSW, and the year so far, treading much the same ground as recent festival and Irish TV hit The Young Offenders, Boyz is the latest in a successful line of adult minded comedies about kids figuring themselves out. It just so happens that in this one, that involves running for your life while tripping on bunny shit and enough gore to make Tom Savini grin from ear to ear. It's a fantastic tromp through the highlands, a place where it's impossible get lost (because there are no corners), making it the perfect place to find yourself.

More about Boyz in the Wood