Blu-ray Review: SOMEONE TO WATCH OVER ME 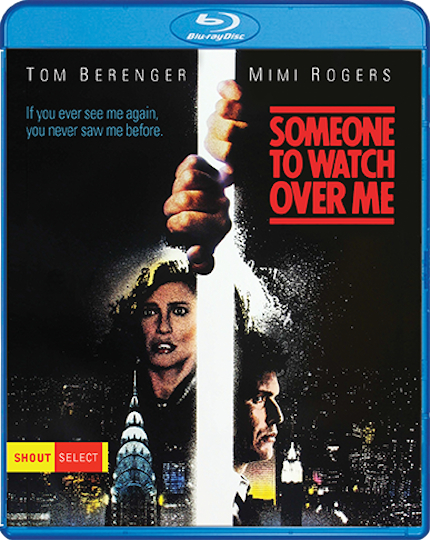 Someone To Watch Over Me may be one of Ridley Scott's (Alien, Gladiator, Thelma & Louise, Black Hawk Down) lesser known films, and it's getting a new Blu-ray release from Shout! Factory on March 12. This 1987 thriller stars Tom Berenger (Platoon, Inception, Major League), Mimi Rogers (Lost in Space, Penny Dreadful), and Lorraine Bracco (Goodfellas, The Sopranos).

Rich socialite Claire Gregory (Rogers) is at a fancy party with her fancy friends and boyfriend when she witnesses mob thug Joey Venza (Andreas Katsulas) murder a friend. You'd think that someone would be smart enough not to off a person while there's a huge social function going on upstairs, but Venza doesn't appear to have a wide range of skills in the intelligence department. Claire gasps, Venza sees her, and then we're off to the races.

Enter cop Mike Keegan (Berenger), who's been promoted to detective. He's got a family, comprised of a cute son and an extra-salty wife, Ellie (Bracco), who tinkers with fixing cars. Somehow, he's been chosen to protech Claire, even though: 1] he hasn't much experience with witness protection; 2] is from a totally different burrough; and 3] this is his first assignment as detective. But hey, white guys fail up all the time in our society, and are given opportunities that no one else would get, even though the situations they're put in are farfetched, given logic and merit.

At any rate, we don't have without this final version of Someone To Watch Over Me without this fail in logic. Mike essentially babysits Claire in her massive Manhattan home each night, but she gets antsy and wants to attend swanky parties, because that's the one reason she exists. Throwing caution to the wind, they go out, and Claire doesn't like the paisely tie Mike wears, so gauche, so she buys him a new one at an upper class department store where everyone knows her name.

Mike's wife Ellie notices, and is concerned, because when another woman starts buying clothes for your man, that's a huge red flag. Of course, she's right, and soon after, Mike cannot control himself and starts sleeping with Claire. Ellie and Claire are about as far away as they can get from each other in the personality department, and from quite different backgrounds. Where Eliie is brusque, Claire is refined. Ellie is as blue collar as it gets, while Claire was born into status and privilege. Mike begins harping on the way Ellie speaks --- for the first time --- and then they're on the fast path to divorce.

Soon, there's some by-the-numbers villainous would-be hits, and Mike discovers that he'd finally rather be with his family. Due to her socio-economic status, Ellie doesn't really have much choice than to accept Mike back into their lives, but she's also in love with the guy, because that's how big Hollywood movies work. Redemption, no matter how eye-roll inducing.

Maybe I'm jaded after a lifetime of seeing films made and written by men for men, with nary another perspective in sight until relatively recently, and even then, Hollywood is clenched in the past. (See the Oscars this year, and every year, as well as the dearth of women and people of color being allowed behind the camera at the major studios.)

I will say that the class struggle that's shown in the lives of the blue collar cops among the rich was a great touch. At the party when the murder is discover and the cops come in to seal the crime scene, there's a line in the script that's excellent writing, something to the effect of "hey you beautiful people, it's gonna get real ugly in here unless you all get the fuck out right now!" Hilarious, and appreciated.

As far as the picture quality goes, this release looks great, with excellent colors, lush blacks (for the most part), and fine details. The film grain is lovely. The sound mix may be a little soft for some, but it's nothing that firing up the volume can't fix. Turning up the sound will also amplify the score by the great Michael Kamen (The Iron Giant, Mr. Holland's Opus, Event Horizon).

The new interviews on this release feaure chats with director of photography Steven Poster (Donnie Darko, Dead & Buried, Southland Tales) and screenwriter Howard Franklin (The Name of the Rose, Antitrust). I found the interview with Poster to be fascinating, as he reveals how he managed to light some scenes, particularly the pool room scene where the murder that kicks off the film takes place. Aspiring filmmakers will want to take note of the great tricks Poster offers.

I've included a clip of the film below, featuring (Rogers) and bad guy Joey (Katsulas). Want to order Someone To Watch Over Me? Head over to Shout! Factory's site here.

Someone to Watch Over Me