This Trailer Is SUPER DELUXE. Thiagarajan Kumararaja Returns With One Wild Ride 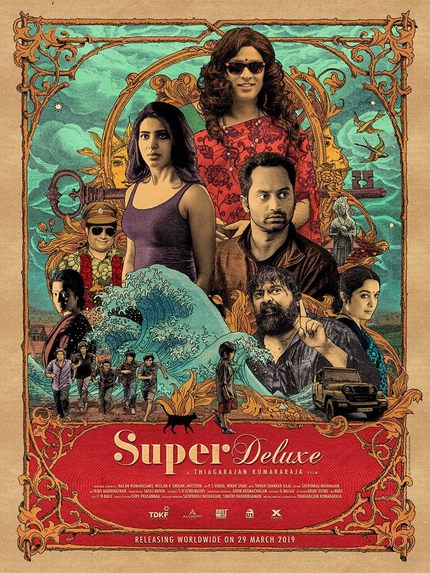 Eight years ago director Thiagarajan Kumararaja stunned Indian film audiences with his debut feature, Aaranya Kaandam (Anima and Persona). Instantly hailed as an indie noir classic and the kind of crime film that much of India has been desperate to replicate in the years since, Aaranya Kaandam was seen as the birth of an incredible new talent, but then Kumararaja went silent for a bit. As audiences chomped at the bit for new material, he has been biding his time in putting together just the right project as a worthy successor, and here we are in 2019 with Super Deluxe.

It is definitely worth the wait.

Putting together a dream team of South Indian talent behind the camera, Super Deluxe promises to be a wild ride for film fans across India, and with a little luck across the world. Kumararaja wrote teh original screenplay and got a little help from some Tamil film superstars like Nalan Kumarasamy (Soodhu Kaavum) and Mysskin (Pisasu). Also on the crew are composer Yuvan Shankar Raja, a trio of cinematographers including Mani Ratnam's go-to guy, P.C. Sreeram (Nayakan), Aaranya Kaandam lenser P.S. Vinod, and action specialist Nirav Shah. That's only the beginning.

The trailer below teases parts of everyone's story through visuals with a voiceover from Sethupathi describing various seemingly unrelated crazy scenarios. The action happening on screen over these two minutes seems pretty crazy, but having seen the film in an early version, I can assure you that it barely scratches the surface of the madness within. Audiences are in for a wild, unpredictable ride with Super Deluxe, so strap in and have a taste, but don't worry, it won't spoil your appetite.

Super Deluxe hits screens around the world on March 29th.