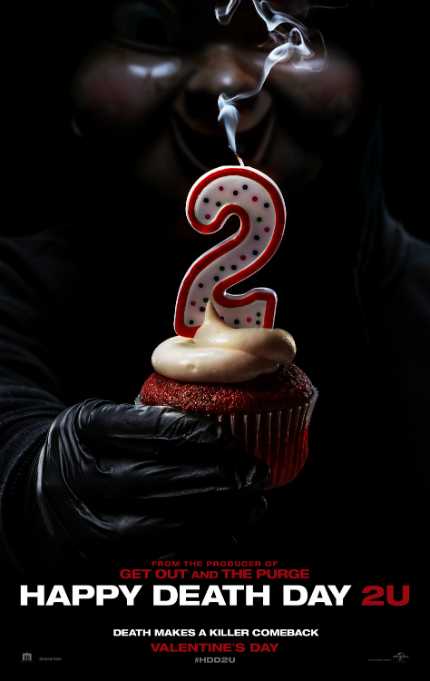 Bright and sunny, Happy Death Day 2U cheerfully subverts mainstream expectations for a sequel to an unexpectedly popular low-budget horror comedy. Horror fans should eat it up, especially if they are less interested in explosions of gore than in something that reflects the thinking of Christopher Landon.

Landon's credits date back to Larry Clark's fascinating crime-drama Another Day in Paradise (1999), though to what extent his work as a writer showed up in the final as released is outside my scope of knowledge. (Two other writers were also credited.) Landon's credit as a writer was also shared on the florid Blood and Chocolate, the tale of a young female vampire; and Disturbia, which manifested obvious debts to Alfred Hitchcock's Rear Window.

He made his directorial debut on Burning Palms (2010), which he also wrote,and so it was there that an inkling of his narrative leanings became more distinct. He then took up writing duties on the Paranormal Activity series, eventually notching credits on three installments before taking the helm on the (slight) spin-off Paranormal Activity: The Marked Ones (2014), which endeavored to do something a touch differently, although it was only partially successful.

Scouts Guide to the Zombie Apocalypse (2015) brought his bloody comic instincts back to the fore in rough fashion, leading to Happy Death Day (2017), which toned down violent flourishes and ramped up the comic thriller aspects of the piece, drawing from a screenplay by Scott Lobdell.

The latter film was a pleasant thriller with edge, primarily palatable because of the breakout, peppy performance by Jessica Rothe, who made college student Tree Gelbman's slow transformation from an unlikable, nay, justifiable, victim into a real, live human being entirely convincing and winning. (Yes, in the same spirit of the TV weatherman played by Bill Murray in Groundhog Day, only with more horror trappings.) As a director, Landon showed his abundant knowledge of cliches in horror thrillers, choosing to embrace, abandon or ridicule them as he saw fit.

For the sequel, Landon, working from his own screenplay, strays even further from serial-killer sequel expectations, though he pays homage to the slasher-sequel formula by increasing the body count, even if we don't really expect the deaths necessarily to be permanent -- hey, we saw the first movie! -- and the violence stays within the boundaries of its PG-13 rating, which means that many people are killed or seriously injured, but without much explicit bloodshed.

Given those limitations, Landon and company deliver another breezy popcorn movie, one that revolves more upon sci-fi movie cliches, as well as continuing with its theme of time travel. Certain sequences feel obligatory rather than essential from a narrative standpoint, while a number of moments meet the "seems like a goofy idea, so let's keep it" smell test.

Nonetheless, it's all in good fun, dastardly rather than diabolical, as if to say: "Look, we all know the first film didn't need a sequel, but since it made so much money, and the studio wants to make it anyway, here's our best attempt at subverting sequel-itis with a cheeky attitude." On that basis, I enjoyed Happy Death Death 2U as a Saturday afternoon matinee.