Review: FIGHTING WITH MY FAMILY, Hidden in Plain Sight 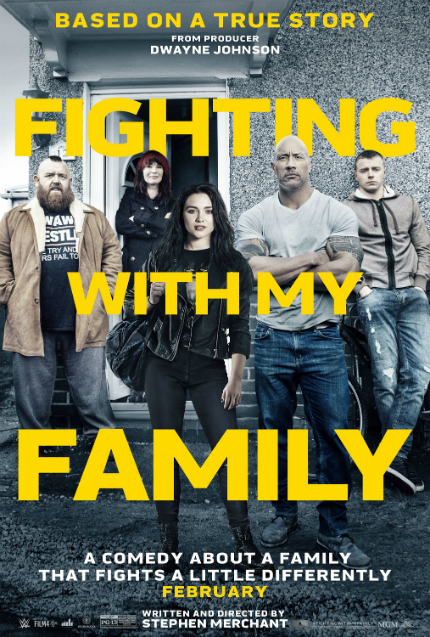 Telling an American success story from a working-class British perspective, Fighting With My Family is an agreeable adaptation of a true story that is wrapped in a cocoon of warmth and humor.

Living in Norwich, England -- about 161 kilometers north of London and about a million miles away from anything glamorous nowadays, according to the film -- Ricky (Nick Frost) and his wife Julia (Lena Headey) have raised their children Zak (Jack Lowden) and Saraya (Florence Pugh) in a rough yet very loving environment. Ricky and Julia still ply their trade as wrestlers and have raised their children likewise.

The family gets along very well with each other. They also play an important role in their community, offering wrestling lessons to young people and putting on events that reliably draw local crowds. Those crowds are diminishing in size, however, and Zak is expecting a child with his girlfriend. So the family is pinning their hopes on the possibility that Zak, and maybe even Saraya, will ascend from the local professional wrestling circuit to the heights of the famed WWE, from which stars like Dwayne 'The Rock' Johnson have been born.

One day, those dreams come true! Sort of, and not in the way the family had anticipated, since it is Saraya who wins a spot and not Zak. First, though, Saraya must travel alone to America and prove she can deliver on her promise at NXT, described as a farm system, where prospects are rigorously trained and then winnowed down to the select few who will actually graduate to the WWE circuit.

As someone who has never watched professional wrestling on television or in person, the idea of watching a true-life story about a professional wrestler did not initially catch my interest. I mean, I've seen Darren Aronofsky's The Wrestler; isn't that enough?

As written and directed by Stephen Merchant, Fighting With My Family says no, that's not quite enough, thank you very much. Merchant is best known for the original (and superior) The Office, as well as Extras, Life's Too Short, and probably a few other things that don't star Ricky Gervais. Mostly, his experience as a director has been confined to television shows, though he and Gervais previously helmed the feature Cemetery Junction (2010).

His solo feature directing debut is a smash. Fighting With My Family captures the working-class environment in Norwich with affection, never looking down upon the struggles of "ordinary" people. (Merchant himself plays the befuddled posh father of Zak's girlfriend.) After the film follows Saraya to Florida, it still checks in with Zak, especially, trying to make sense of his life in England after his dream didn't come true.

Saraya, having changed her stage name to Paige, is far more experienced and proficient as a wrestler than the other young women at the training camp, who all look like models. (Some of them were.) She is shorter in height and lacks the glamour that the other ladies exude, seemingly without effort. She also, desperately, misses her family; she's an 18-year-old girl, thousands of miles away from home, and without any friends. She begins questioning her place at the camp, and in life.

Of course, this is a movie that is based on real life, so the general trajectory of the story is not surprising, but writer/director Merchant populates his scenario with characters who bring a little something extra to the stereotypes. Vince Vaughn brings his usual elan in delivering dialogue, accompanied by welcome substance to his role as Hutch, the camp's well-seasoned primary trainer and leader. Dwayne Johnson also stops by, both in his persona as 'The Rock,' as well as his real-life persona as Dwayne Johnson, actor and source of inspiration for millions (?!).

Nick Frost and Lena Headey are, as might expected, absolutely terrific as parents who want the best for their children. Jack Lowden, who has been so impressive in dramatic roles, from '71 to Mary Queen of Scots, invests his character with a good balance of weighty regret and determination.

Florence Pugh is the stand-out as Saraya/Paige. Like Lowden, she's better known for her dramatic roles, so she brings welcome depth as a young woman who is torn by the choices that lay before her. She also matches her on-screen parents in comic delivery and physical prowess. I would be afraid to stand in the ring with any of these people.

Told with great energy and abundance, Fighting With My Family makes it easy to fall in love with professional wrestling and the people who pursue it. It's a winner.

Now playing in limited theatrical engagements, the film will open wide across the U.S. on Friday, February 22.

Do you feel this content is inappropriate or infringes upon your rights? Click here to report it, or see our DMCA policy.
Dwayne JohnsonFlorence PughJack LowdenLena HeadeyNick FrostStephen Merchant