Review: TOUCH ME NOT, A Bold, Challenging Look at Intimacy and Sexuality 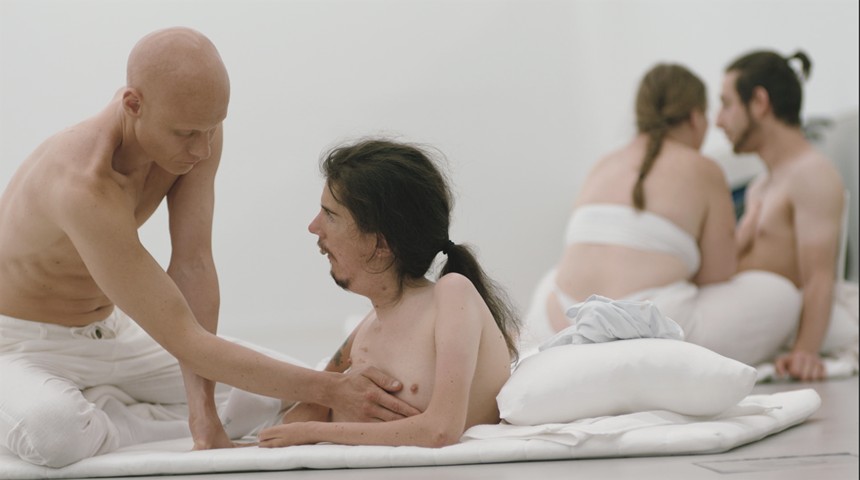 “All emotions are welcome here.” So says male escort/therapist Seani Love during a session with Laura (Laura Benson) in Romanian filmmaker Adina Pintilie's startling and provocative film Touch Me Not, which follows Laura and several other characters as they explore their relations to their own bodies and to other people, explorations that often involve sexuality and other intimate realms.

And in the generously accepting spirit of Seani Love's statement, the characters featured are quite a varied lot, including: Tomas (Tómas Lemarquis), a man with alopecia; Hanna (Hanna Hofmann), a transgender sex worker/therapist whom Laura also meets with; Christian (Christian Bayerlein), a severely disabled man with spinal muscular atrophy, and his able-bodied girlfriend Grit (Grit Uhlemann).

Through these characters, Pintilie explores her themes by blurring the boundaries between fiction and documentary, mixing professional actors with nonprofessionals, and appearing in her own film as one of the characters, often as a disembodied presence on a camera monitor, as she interrogates Laura intermittently throughout the film.

Laura’s problems with intimacy are expressed by the film’s title, as she recoils from physical touch or other contact from others. The origins of this problem are not spelled out, although some emotionally fraught visits to her dying father in a hospital hint at possible causes. Her search for a solution leads her to some very non-traditional therapies, all seeming to involve sex workers of some kind.

Hanna and Seani, the two therapists Laura visits, offer very different approaches to coaxing Laura out of her shell. Hanna cheerfully pontificates on both her love of classical music and the pleasures she derives from her transitioning body. Seani takes a more direct and physically confrontational method, involving punching Laura’s chest (after asking her permission), eliciting shouts and tears from Laura (Seani confesses to having a fetish for tears).

The film also closely follows Tomas, who also has difficulties with intimacy and relationships with others, due to the alopecia which started in his early teens and made him an ostracized outcast. Tomas participates in a touch therapy workshop, in a blindingly white room where everyone wears white clothes, visually a chillingly clinical environment that contrasts with the close intimacy the participants are encouraged to pursue with each other. Tomas is paired with Christian, whose disability manifests itself in a severely twisted frame, prominently jutting buckteeth, and uncontrollable drooling.

Despite having an appearance that is far from conventionally attractive, Christian maintains an unfailingly positive demeanor, and regards himself as an actively sexual being and appears to be far more comfortable in his skin than either Laura or Tomas. When Tomas confesses to feelings of revulsion during an exercise in which everyone is made to touch their partners’ faces, Christian, far from being offended or hurt, instead praises Tomas for his honesty in describing his feelings.

In her first feature, which won the Golden Bear at last year’s Berlin Film Festival, Pintilie tries a great many things at once: mix documentary and fiction, testing the boundaries and even questioning the definitions of both categories; forcing the viewer to confront their own biases and preconceptions of sexuality and the attractiveness of the bodies that participate in it; interrogating the role of the filmmaker herself in this process, and whether or not her intended empathy is in fact disguised exploitation.

Pintilie’s approach exposes some flaws, such as her thematic reach sometimes exceeding her grasp, and the documentary elements being rather more compelling than the fictional ones, at least as far as can be separated in this intricately hybridized film. However, Pintilie successfully creates a challenging and memorable experience, one that certainly won’t be embraced by all audiences, but one that impresses with the boldness of its vision.

Touch Me Not is now playing a week-long run at the Museum of Modern Art through January 17. For more information and tickets, visit MoMA’s website.

Do you feel this content is inappropriate or infringes upon your rights? Click here to report it, or see our DMCA policy.
Adina PintilieTouch Me Not