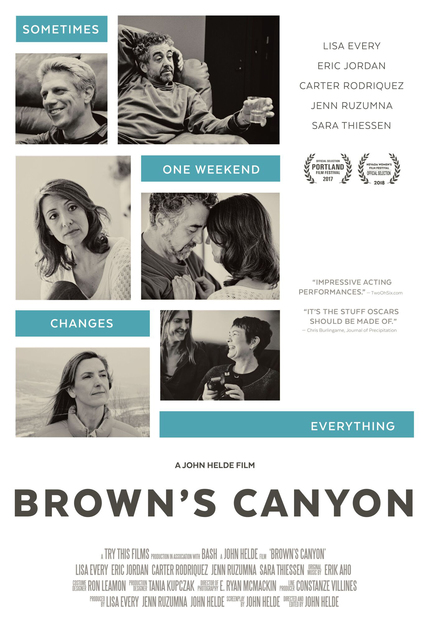 Freestyle Digital Media, the digital film distribution division of Byron Allen’s Entertainment Studios, has acquired North American rights to the comedy-drama BROWN’S CANYON.  The comedy-drama about five people at turning points in their lives debuts on VOD and will be available to rent and own on digital HD across global internet and satellite platforms through Freestyle Digital Media on January 29, 2019.

BROWN’S CANYON tells the story of two life coaches who head into the Utah mountains to lead a mindfulness retreat, only to have their own lives unravel over one awkward weekend.  Mindfulness practitioners Allison and Stephi hope to resuscitate their careers by hosting a women’s retreat at an isolated mountain location.  When Allison’s husband Thom, reeling from a financial disaster, and his sidekick Billy, arrive unexpectedly, the zen dreams begin to unravel.  A mudslide, an earring, and a bowl of spoiled chili conspire against them, forcing everyone to re-examine their own messy lives.  Sometimes, one weekend changes everything.

“BROWN’S CANYON was developed collaboratively with the cast, which is fairly unusual in the world of narrative movies,” said filmmaker John Helde. “I love this process because it gives me the opportunity to work with the cast for a much longer period, and because it brings the energy and spontaneity of multiple creative minds to the story.”

ES.TV, MYDESTINATION.TV, and JUSTICE CENTRAL.TV. The company also produces, distributes, and sells advertising for 41 television programs, making it one of the largest independent producers/distributors of first-run syndicated television programming for broadcast television stations. With a library of over 5,000 hours of owned content across multiple genres, Entertainment Studios provides video content to broadcast television stations, cable television networks, mobile devices, multimedia platforms, and the World Wide Web.  Our mission is to provide excellent programming to our viewers, online users, and Fortune 500 advertising partners.

Do you feel this content is inappropriate or infringes upon your rights? Click here to report it, or see our DMCA policy.
distributionEntertainment Studios Motion Picturesfreestyle digital mediastreamingVOD