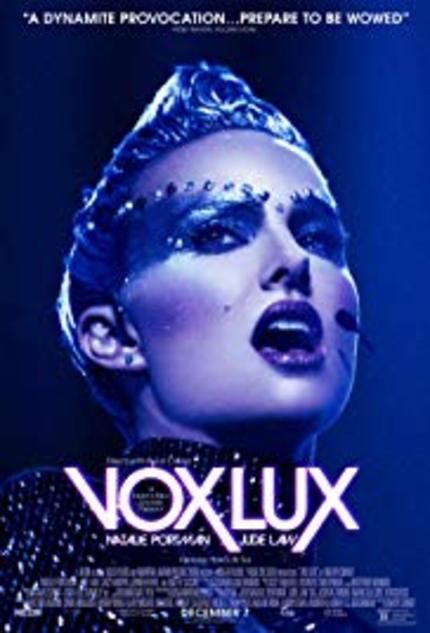 Writer-director Brady Corbet aspires to mesh together the exploratory contents of pressured celebrity and societal tragedy in the well-meaning but disjointed pop cultural musical drama Vox Lux. Indeed, it is an earnest effort to channel the problematic platforms of stardom and childhood trauma. However, Corbet never quite convincingly lets the dramatic foundation of fame and fatality in Vox Lux gel evenly. Nevertheless, the behind-the-scenes turmoil of a misguided pop star getting back on the right track has some merit in its compelling message.

When a haunting 1999 school shooting incident takes place, 13-year old gunshot victim Celeste (Raffey Cassidy, "The Killing of a Sacred Deer") is among the survivors of the horrific event. During the memorial service when Celeste poignantly sings a song about the horrific happening she becomes the symbolic "It" girl of the moment. Celeste's spotlighted talent is exposed to the world. Hence, a sudden pop sensation is born before the public's eye straight out of Staten Island. Now the big time awaits for Celeste and her songwriter sister (Stacy Martin).

Soon, the ball rolls as Celeste delves right into the dysfunctional machinery that is her musical career. She is saddled with a sleazy manager (Judd Law) pulling any unsavory strings to keep Celeste's money-making clout afloat. Celeste seemingly gets shuffled around at the opportunistic hands of predatory practices in play. The diva songstress, when not being catered by her sister and mother trying to promote her brand, engages in a one-night stand. In the meantime, as Celeste's pop star stock climbs her shaky hold on stability gradually stumbles as newsworthy tragedies seem to coincide with her showbiz shenanigans.

Fast forward to 2017's adult Celeste (played by Oscar-winner Natalie Portman). The broken performer is now merely a shell immersed in drugs, drink, and a declining self-image.  While Portman's Celeste is a walking wounded woman drenched in narcissistic tendencies, we are treated to some crisp narration from Willem Dafoe highlighting the plagued path our disillusioned entertainer has taken as the burdened poster girl for singing career comebacks.

Joined at Celeste's hip is her estranged daughter Albertine (played by Cassidy). Things become rather complicated for the unfocused Celeste when a Croatian mass shooting at a beachfront echo one of her previous trademark music videos. Should guilt overcome Celeste based on this inspired beach mass shooting connecting her in adulthood as the school shooting did during her childhood years before? Obviously not but it does not change what psychological damage it may have created for Celeste's fragile psyche.

Essentially, it is an interesting tactic in how Corbet attempts to equate fame--its entire delicious and dark edginess--as an unpredictable tool for self-destruction. Whether devoutly cynical or scathingly satirical about how notoriety as either an absorbed iconic pop princess or as an unhinged gun-wielding terrorist is interchangeable as a toxic attention-seeking means Vox Lux's lofty commentary is readily realized. The infusion of celebrity worship--seemingly innocuous or insidious--makes for a tricky subject matter worth examing with corrosive truthfulness. Still, Corbet approaches the slight material with paper-thin perplexity that feels rather stretched out in execution. Vox Lux wants to be sensationalistic and question the morality of those yearning to seize the spotlight in both triumph and tragedy but the whole confection comes off as a mixed bag of pretentiousness.

Portman redeems much of the film as the persecuted pop diva in transition. She effectively embodies the persona of the sparkling gifted showboat Celeste drowning within her self-inflicted doubts, demons, and overall dysfunctional makeup. Sadly, the awkward marriage of world affair conflict and show business shakedowns/breakdowns does not have the caustic depth to propel the bleak Vox Lux as a sturdy foray into the turbulence of artistry and social alienation. In short, Vox Lux can somewhat be perceived as a generic junior-sized A Star is Born without the infectious Lady Ga Ga splashiness.

Fame is a deceptive game not to be played with too lightly for the famous or infamous. It is too bad that Corbet's mediocre musical drama could not have hit a better sounding note to illustrate its probing point.

Do you feel this content is inappropriate or infringes upon your rights? Click here to report it, or see our DMCA policy.
celebrityJude LawmusicNatalie Portmanpop culturetragedyVox Lux