REVIEW: The Second Time Around seems like the first for an aging couple in romantic resonance 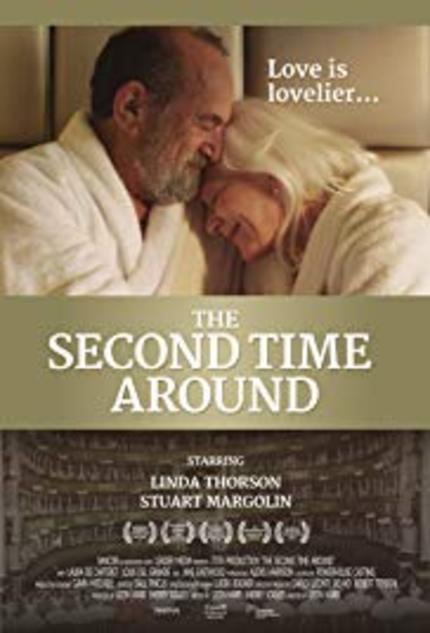 The celebration of senior love in cinema is always a welcomed premise because it is something that is rarely seen especially for the demographic audience it targets. In co-writer/director Leon Marr's gently exuberant and inspiring mature romancer The Second Time Around the unexpected sparks fly between two unlikely mature souls that find the one comfort they treasure--opera music--and use it as a foundation for finding solid romance with one another. The Second Time Around explores the familiar themes of developing mutual attraction...something that we probably have seen countless times before. Still, it is quite refreshing to witness folks of an advanced age connecting in a quaint gem of a film that freely showcases affection in such an elegant, sophisticated quirky manner.

Marr and co-screenwriter Sherry Soules do not inject too much punch into an otherwise pedestrian romantic story about vibrant oldsters re-establishing their dormant love lives as a new release in their lonely existences. Nevertheless, the main ingredients that allow The Second Time Around to effectively resonate are its two veteran leads in the always radiant Linda Thorson and spunky Stuart Margolin. Many, baby-boomers in particular, may nostalgically recall these priceless performers from their extensive work on television from yesteryear.  Thorson was the youthful and curvaceous replacement for Diana Riggs's iconic and sleek sidekick Emma Peel on the immensely popular British '60s spy TV series The Avengers. Margolin, the Emmy Award-winning supporting actor from the '70s detective TV series The Rockford Files and fixture on episodic programs, is on board with the effervescent Thorson to flesh out the giddy Golden Age overtones in The Second Time Around.

The fetching widow Katherine Mitchell (Thorson) has to give up her living arrangement independence at her own place and retreat to a senior citizen convalescent home in the aftermath of a nasty fall downstairs after departing the opera. Thus, her rehab assignment includes socializing among her fellow older peers. Katherine finds the residents rather charming and approachable. In particular, widower Isaac Shapiro (Margolin) makes an unusual impression within the bunch. Abruptly abrasive at times, the retired tailor and Holocaust survivor Isaac shares an interest with the distinguished and feisty Katherine as she continues to nurse her injured hip. Their mutual adoration for opera music is the tightening glue that gradually brings the two widowed individuals closer emotionally and romantically.

Indeed, the perky but reserved Katherine and the crusty-minded Isaac make for an odd couple immersed in operatic song and spirit. Both are understandably wounded on the surface (or perhaps even deeper) but the lyrically soothing and sensual vibes of opera are the healing source for the couple's bereavement. Both Katherine and Isaac gradually learn to let their guards down and permit their hearts to operate beyond the vulnerability. In this case, opposites do attract and Marr resourcefully coasts on the simplicity of making the music a therapeutic security blanket for the aging lovers to bask in their newly discovered affection for one another. The sequences such as the preparation for the nighttime senior dance and a sumptuous moonlight gathering between Katherine and Isaac really give a genuine and authentic feel for the mature tandem finding their footing in the name of elusive love and longing.

Again, The Second Time Around is not going to set the cinema world on fire in terms of its late-blooming love story between a pair of mismatched seniors becoming devoted soulmates through opera and operational isolation. Both Thorson and Margolis are a revelation in this small-scale love story. Romance films for the over-60 crowd are not necessarily plentiful per se. But geriatric gems such as the underrated Abe and Phil's Last Poker Game and Second Time offer a type of romanticism that is under-represented at the movies. The selling point is Thorson's Katherine, a woman quietly disenchanted but spirited enough to enjoy her musical tastes when other matters are not as appetizing. Saddled with a self-absorbed adult daughter (Laura de Carteret) and rebellious granddaughter (Alexis Harrison), Katherine Mitchell needs an outlet of attention and companionship--something fulfilled by grumpy-turned-softie Isaac Shapiro.

For the former sexy Tara King and lovable sleazeball Evelyn "Angel" Martin, it is so liberating to witness ex-TV titans Thorson and Margolin as cuddling elders on the emotional rebound giving romance a second chance on the big screen.

Do you feel this content is inappropriate or infringes upon your rights? Click here to report it, or see our DMCA policy.
Linda ThorsonmatureoperaromanceStuart MargolinThe Second Time Around