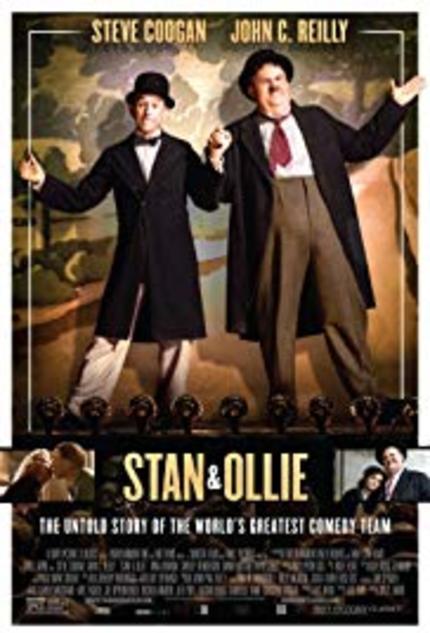 The Three Stooges. Abbott & Costello. Martin & Lewis. The Bowery Boys.  Hope & Crosby. Burns & Allen. The Little Rascals. Sure, there are a few of the notable legendary pairings and/or comedic collaborations that come to mind when recalling the Golden Age of funny-minded showbiz. However, the riotous shenanigans of Laurel & Hardy are right up there on the Mount Rushmore of hearty chuckles.

Thoroughly beloved in their nostalgic brand of stumbling and bumbling on the big screen from yesteryear's cinema and stage, Stan Laurel and Oliver Hardy provided substantial schtick of physical pratfalls and sumptuous sight gags that never lose their frothy luster for guilty-minded laughs. As a tremendously treasured comedy act, somehow the frolicking genius of lovable dimwits in klutzy pole-shaped Laurel and flustered pot-bellied Hardy still seems to get lost in the shuffle among the greats of the comedy-driven creators stretching back to the Vaudevillian circuit.

In director Jon S. Baird's ("Filth", "Cass") reverential and resourceful dramedy biopic Stan & Ollie, the cinematic tribute to the masters of mockery is presented in a sweet-minded, earnest manner. Stan & Ollie is an observational, heartfelt character study of two committed and talented partners connected masterfully in the adoring bond of show business and friendship. Screenwriter Jeff Pope ("Philomena") astutely does not dwell so much on the outlandish routines of Stan Laurel's and Oliver Hardy's trademark comic bits but concentrates on the behind-the-scenes details of the performers' personal lives and professional endeavors within the inner workings of old-time Hollywood. Die-hard Laurel and Hardy will absolutely gravitate to this intimate, bouncy profile of the skilled slapstick comics. In fact, casual fans and newcomers to Stan's and Oliver's vintage nuttiness will be impressed by the down-to-earth approach in portraying the two good friends until the end of their faltering film career.

Both Steve Coogan and John C. Reilly are phenomenal as the devilish duo of movie-making mishaps. Not only are their uncanny physical likeness a wonderment but the mannerisms and movements are impeccably demonstrated. Coogan and Reilly certainly deserve an Oscar nod for their terrific turns as the heralded funnymen reaching a turning point. Reilly, in particular, needed the bittersweet biopic Stan & Ollie as a redemptive gesture to counteract his Christmas-released clunker, Holmes & Watson. Beautifully shot with solidly textured turns from Coogan and Reilly, Stan & Ollie should at least garner some interest in searching for old Laurel & Hardy movies and other inspired comedy outlets.

The film starts off circa 1937 during Laurel's (Coogan) and Hardy's (Reilly) reign as box office bigshots in Tinseltown. Despite their popularity, the performing pair--mainly Laurel as the "brains" of the twosome's comical material operation--had a contractual dispute with movie studio head honcho Hal Roach (Danny Huston). Although it was Laurel that called the shots and acted as the team's spokesman for business-related decisions, Hardy took a rare stance about the staunch direction Laurel was taking them into that could harm their movie-based momentum. The fallout was inevitable for Stan and Ollie in the aftermath of the Roach debacle.

Fast-forward sixteen years later in 1953 where Stan Laurel has visions of staging a comeback. This is an ambitious agenda but will audiences be as receptive for the previous antics of the one-time kings of clownery? In the meantime, poor Oliver Hardy is struggling with woeful health issues highlighted by his staggering morbid obesity. While plans are put on hold for a movie reunion, the older entertainers head to England starring in a theater stage tour. In tow with Stan and Ollie are their trusty wives in Ida Laurel (Nia Arianda) and Lucille Hardy (Shirley Henderson).

At first, Stan and Ollie struggle to recapture their instant mojo but gradually the fans are won over by their playfulness onstage. Soon, conflict and differences of opinion from yesterday start to fester between the slightly troubled twosome. After all, it is quite difficult trying to put the heated histrionics in the backseat while trying to move forward in what amounts to be the twilight years of their comedy career. And it certainly does not help matters that the guys' wives do not exactly see eye to eye with one another. Nevertheless, Ida and Lucille show support for their husbands wholeheartedly despite whatever underlying dysfunction exists between the fragile couples.

Gently compelling in its perceptive skin, Stan & Ollie's flashiness exists in its low-key premise of two gifted men bound at the Hollywood hip in mutual admiration and quieted strife. Coogan and Reilly bring animated life and softened pathos to one of the most iconic comedy celebrities in the twentieth century.  Interestingly, Baird's creative ode to nostalgia that includes the practicing notion of controlling movie studios, the antiquated Hollywood system in the Golden Age era, fading stardom and ageism, and the pursuit of relevancy for the sake of showmanship are the tip of the iceberg for the heralded scrawny and rotund pals at the forefront of their nearly forgotten comedy classics. Hence, we are elated to see Stan & Ollie get us all in another fine mess.