REVIEW: Ian is an uplifting story about a disabled boy looking to break his restrictive boundaries 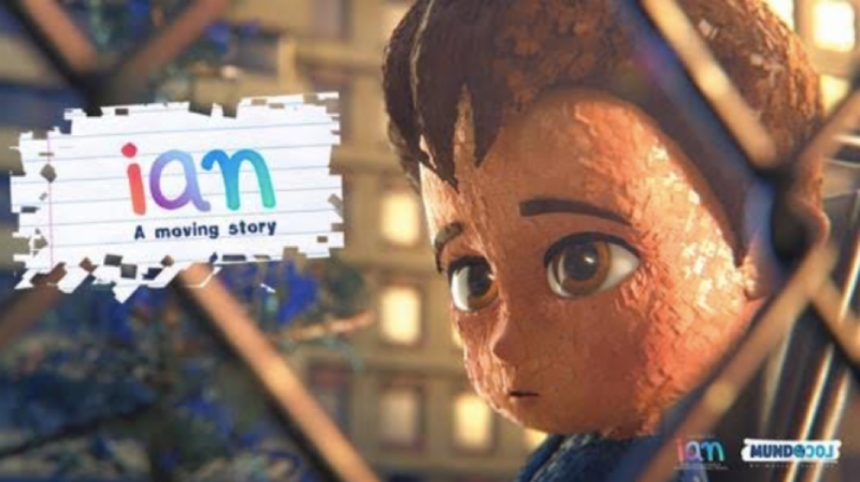 The moving and inspirational short film animation Ian tells the heartfelt tale of a wheelchair-bound boy stricken with cerebral palsy but does not feel included by his able-bodied peers at the playground. Inspired by a true story, Ian is a sweet-minded message of inclusion--the need to belong and overcome differences that are perceived as glaring obstacles. Clearly, the thought of being an outcast and reminded by healthy playmates that you are a curiosity or convenient joke is a heartbreaking revelation. Nevertheless, Ian's messaging is a cautionary reminder that we all harbor the notion to feel welcomed and be part of the scene despite whatever personal struggles that may persist. Consequently, Ian is a winning fable about the determination to seek out personal friendships, experience acceptance, and feel relevant in the process.

In conjunction with Mundoloco Animation Studios and the Ian Foundation (a.k.a. "Fundacion Ian"), this emotional yet spry animated gem was directed by Abel Goldfarb. Ian's release and creation are at the capable hands of award-winning Latin-American filmmaker Juan Jose Campanella whose inventive animated techniques and poignant profile of a gutsy kid daring to partake in the frivolity despite the shaming and snickering from the other thoughtless children feels gently gut-wrenching. Hence, the old saying on how kids can be cruel certainly applies to poor Ian's detractors.

Goldfarb allows Ian's vivid imagination to place him in the center of the playground among the playful tykes even though his limp body cannot accomplish this feat from outside of the fence for which he is observing the fun activities of others. Ian momentarily fantasizes about his interaction with the kids until the physical signs of his handicap start to manifest. This, of course, causes the uneasy stares, laughter, and awkwardness of Ian to undergo humiliation pertaining to his physical inadequacies and retreat back to the loneliness of his crampy wheelchair. This does not deter Ian from dreaming about his treasured spot within that forbidden playground and facing the little monsters that find their amusement in needling him. Understandably, Ian is self-conscious about the uncontrollable movements of his hands that cannot hold a cup or his feet and legs that just will not react accordingly. How can anyone endure such scrutiny especially with an infectious spirit such as Ian's?

According to the press release for Ian: "Ian was produced at MundoLoco CGI using a unique animation technique that combined stop-motion sets made out of recycled waste with the latest CG technology. The film doesn't use dialogue to express the children's feelings making it inclusive to everyone regardless of their age, race, or language they speak". Indeed, Ian does boast a refreshingly crisp, eye-popping animation that is colorfully sleek and innovative. Campanella's impressive credits include fare such as The Son of the Bride, Metedol, and the Academy Award-winning The Secret in Their Eyes. Now the contemplative Ian is welcomed in the world of Campanella's radiant creativity.

In addition to Ian's barely 10-minute running time as a piece of reflective kiddie-coated entertainment, Goldfarb's quaint yet rousing exposition also effectively acts as a campaign rally for The Ian Foundation headed up by the real-life subject matter's dedicated mother Sheila Graschinsky. Graschinsky's main goal was to wipe away the ignorance and insensitivities toward people--young and old--saddled with disabilities. Therefore, incorporating her son Ian's despair into this ambitious notion to educate the destructive intentions of bullying and other judgmental disdain was generously thoughtful and lovingly considerate. Screenwriter Gaston Gorali does a decent job in conveying the pride and pathos for Ian's willingness to integrate into a hostile environment that quite does not know how to demonstrate tolerance.

The animated short Ian  can be viewed on YouTube at  https://youtu.be/6dLEO8mwYWQ