Bridey Elliott wrote, directed, and costars in a comic drama that cuts close to home. 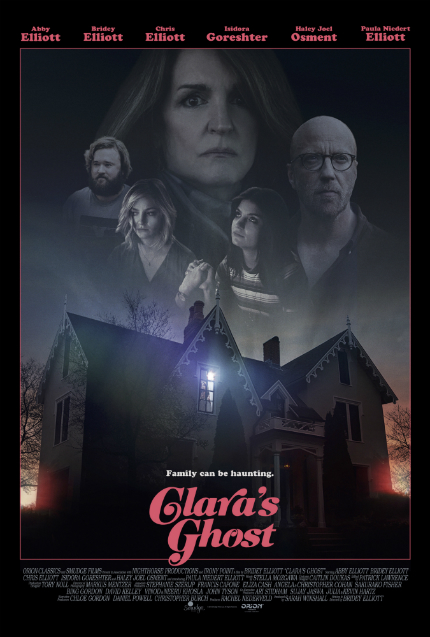 What's most scary about Clara's Ghost is not the titular apparition, but the dysfunction it represents, at least for a non-performing member of a cynical show biz family.

The film is set largely in and around the Reynolds family home in Connecticut. We follow them during the course of a single evening as daughters Julie (Abby Elliott) and Riley (Bridey Elliott) gather with their parents Ted (Chris Elliott) and Clara (Paula Niedert Elliott).

More than by the way, it's not a coincidence that all the lead actors have the same family name, since they are all members of the same immediate family in real life. And, however fictionalized the story may be, the characters themselves, as well as their cutting interpersonal dynamics, strongly resemble the comic, yet often uncomfortable, on-screen personas that have been created by the Elliott family in talk show appearances.

Written and directed by Bridey Elliott, the film draws upon those personas as a head start to explore the Reynolds family, especially Clara. She may not be in show business, but it's quickly apparent that Julie and Riley did not get their sense of humor nor their perspective on the world solely through their father.

As a non-performer, Clara has an outsider's view of her family's shenanigans, which means that she has been exceedingly tolerant of their speech and actions over the years. Yet it's also clear that she has become increasingly fatigued by the ceaseless cynicism and nasty barbs that the others pass off as harmless comedy. Her dissatisfaction is fleshed out by the presence of handyman Joe (Haley Joel Osment), who proves to be an unexpected draw for Clara.

Thus, we have the titular ghost. No one else sees the fleeting glimpses of a disturbed woman named Adelia (Isidora Goreshter), so we are left to wonder: Is Clara losing her mind? Or has she always lived on the edge of reality?

Clara's Ghost can fairly and firmly be placed in the 'cinema of discomfort' sub-genre of comic dramas that continues to spread through American independent films. (In 2009, Damon Smith at Eye on Film used two good examples to illustrate and explain.) Though the characters in Clara's Ghost are never grating, Bridey Elliott's direction, at times, allows the cast (including herself) to indulge their worst, least entertaining bits.

This may be entirely intentional, of course, which is why I kept watching through scenes that might otherwise make me flee the theater (or, press 'stop' on the digital screener I was kindly provided). Especially through her clever script and acidic acting, Bridey Elliott acknowledges her family influences and asserts her own creative individuality.

The popular, comfortable belief is that our family should comfort and support us as individuals. Bridey Elliott appears to suggest that family members can support one another, fine, but maybe it's better to raise hackles and let tempers rise as they will, all toward the end of being more empathetic to one another.

It's a haunting thought.

Clara's Ghost is now playing in select theaters and is also available on VOD and Digital HD via Orion Classics.

Do you feel this content is inappropriate or infringes upon your rights? Click here to report it, or see our DMCA policy.
Abby EliottBridey ElliottChris ElliottHaley Joel OsmentIsidora GoreshterPaula Niedert Elliott