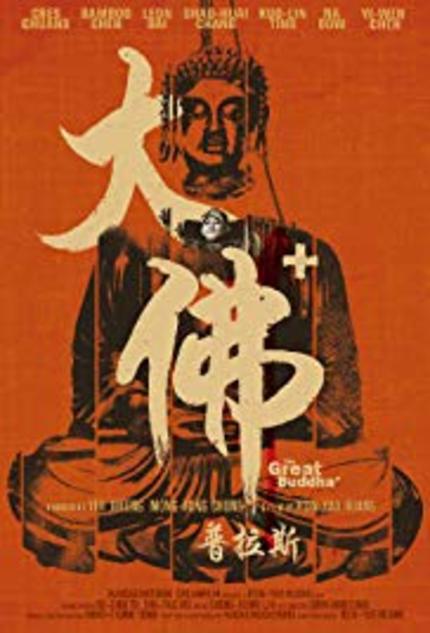 Taiwanese filmmaker Hsin-yao Huang's international arthouse dark comedy The Great Buddha + is an odd, philosophical smorgasbord of scathing themes that colorfully decorate this off-kilter social critique of underclass religion and repression. As writer-director, Huang is making his feature film debut in an ambitious, imaginative, and bitingly humorous cultural concoction that attempts to showcase the overlooked malaise of meager existences in Taiwan through off-base cynicism. Weirdly inventive and unconventionally compassionate, Huang has shown his observational eye for delivering the devilishly glib realities through a couple of middle-aged protagonists just existing on the brim of boredom and quieted insanity. The Great Buddha + is comprised with flashes of veiled outrage that Huang eagerly explores with seriocomical curiosity.

Radiant in its crisp black-and-white glean, Huang's exposition of humdrum survival for its disillusioned characterizations is honestly realized as he provides a genuine weariness that delves into the lopsided landscape conveyed through eroticism, misery, sharpened wit, and lingering skepticism. Amazingly, there is a formidable balance where Huang displays the circular angst-ridden patterns of tug-of-war toxicity between the doomed deadbeats and the shady authoritative figureheads that wallow in secrets and mysteries. The familiarity behind the class struggles of working-class stiffs and the shady-minded superiors that employ them set against the background of surfacing disdain is not anything particularly revolutionary in its shrewd messaging. Still, The Great Buddha + makes for a wicked case of bubbling bleakness inside Huang's naughty hoot of a cheeky narrative.

Incidentally, The Great Buddha + stems from Huang's revered award-nominated short film The Great Buddha. In any event, the story centers around a couple of friends grinding away at lowly jobs. Night security guard Pickle (Cres Chuang) works at a bronze Buddha statue factory. Pickle's buddy Belly Bottom (Bamboo Chu-Sheng Chen) is a daytime recyclables collector. Together, this aging duo toil at their uneventful work while trying to escape the uneventful duties of their thankless employment. Both Pickle and Belly Bottom realize that their dull lives--both professionally and personally--are crippling and persistent. As middle-aged men stuck in a mental rut of arrested development, they are simply resigned to go through the motions while clinging to adolescent sensibilities. Clearly, hoping for a bright future with this stagnant tandem is definitely out of the question.

The holy-minded inclination of Pickle is as solid as his committment to caring for his frail mother. Otherwise, Pickle and Belly Bottom engage in mindless television viewing, browsing through discarded girlie magazines and just hanging out in general. However, they need some major excitement as nothing compelling happens around the statue factory. Thankfully, the challenge of finding excitement presents itself when Belly Bottom confronts Pickle with the urging to spy on his boss Kevin (Leon Dai) courtesy of the on-site camera's embedded card. Indeed, the buddies get more than they bargain for when it is revealed how freaky Kevin is behind the scenes. Hence, witnessing Kevin's penchant for car sex and his constant dalliances with women overall is something of a wide-eyed revelation for the guys that have no identifiable life whatsoever.

Of course, this titillating reveal about Kevin's amorous improprieties puts the jeopardized Pickle in...well, a pickle. Should it get out that kinky Kevin learns of Pickle's and Belly Bottom's intrusion into his secretive sordid affairs this could spell disaster. What if Pickle loses his lousy job and cannot financially keep his ailing elderly mother afloat? On the flip side, Pickle and Belly Bottom must be both envious and respectful of Kevin's effortless ways into carrying out his sexual desires on random females when all they can do is fantasize from afar about the opposite sex through suggestive images. Additionally, it does not help that Kevin is connected to other sinister forces that have a stronghold on his questionable business practices. For Pickle, he is in a precarious predicament and whether or not the secrets of the corruptible Kevin unfolds there is nowhere to start fresh. The toxic tarnish for both men have spread in a dullard period gone potentially dangerous.

The cohesive element in Huang's The Great Buddha + is the serving of absurdity that instills both mixed humor and sense of hopelessness that cohorts Pickle and Belly Bottom bring to the turbulent table. Devout worshippers, a tacked-on murder mystery, political static, provocative yearnngs, blue-collar stagnation, workplace woes--all are subversively touched upon in Huang's artistic universe in his tangy Taiwanese tale that impishly pours on the feisty-minded fodder. The fluidity of the comically coarse criticisms of misguided power and privilege that hovers over the mischievous middle-aged misfits is infectious.

Overall, Huang's giddy game of the haves versus the have nots in Taiwan's scope of social class madness is what drives the potbelly punichiness in Buddha.

Do you feel this content is inappropriate or infringes upon your rights? Click here to report it, or see our DMCA policy.
corruptionmenial jobssexual encountersocial classesTaiwanThe Great Buddha +