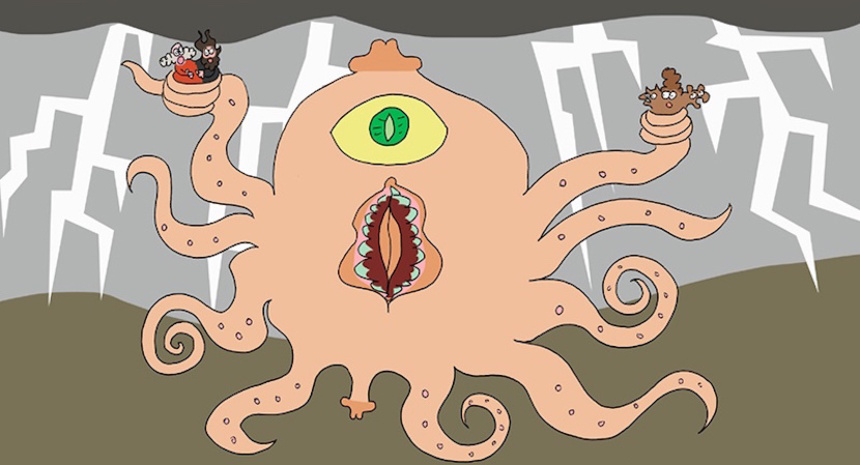 Tenacious D in The Pick of Destiny, the first and so far only film adventure of Jack Black and Kyle Gass’ rock band, is an underrated movie and a heartfelt tribute to rock 'n' roll that fulfills its purpose of making you laugh, while also delivering a very memorable soundtrack that has some of the band’s best songs.

That initial sequence told through the song "Kickapoo", about the childhood of the rocker black sheep of a religious family (JB, Black’s character), is perfect to exemplify the worth of Tenacious D in The Pick of Destiny as a comical "rock opera", even with cameos by Meat Loaf and Ronnie James Dio himself.

Almost 12 years after the premiere of Tenacious D in The Pick of Destiny, the new web series starring, musicalized and animated by the group,

Let’s see, Jack Black himself decided to "animate” this YouTube series composed of six episodes. Although it's curious that the actor, guitarist and vocalist made the drawings of Post-Apocalypto, this not only gives it an intentionally amateur look but, actually, one cannot even say that the series is "animated" because the characters lack movement: what we see are the colorful drawings in sequence and nothing more, not even the mouths of the protagonists move and, consequently, the series makes the animation that South Park had 20 years ago look as something extraordinary.

But the main problem is in the very loose script; while the plot of The Pick of Destiny was basic and from there several absurd moments were built (remember the crazy and ridiculous appearance of Sasquatch?), Post-Apocalypto is more like an arbitrary succession of the occurrences that the duo of Tenacious D surely had while in an altered state. Perhaps in the midst of their party, a senseless story about Tenacious D facing the end of the world - distanced from their characteristic love for rock and focused on random encounters with other characters such as a group of women, the Terminator robot or the sons of both JB and Donald Trump -, seemed like a hilarious idea, but the reality is that the six chapters of the series have only occasional fun.

Post-Apocalypto features also the most vulgar Tenacious D, since The Pick of Destiny and its spiritual predecessor School of Rock, by Richard Linklater, were studio films conceived for a larger audience. What’s disappointing is that the idea of ​​Black and Gass to take advantage of the inherent freedoms to exhibit their work on YouTube is synonymous almost exclusively with showing drawings of penises on the screen, or a Terminator with a vagina (seriously!).

Yes, the essence of Tenacious D is the antithesis of seriousness and maturity, but, certainly, for demented adventures, vulgarities, parodies or the attempt to satirize United States politics, intelligence and cohesion are needed, something that Post-Apocalypto, and its forgettable soundtrack, generally lacks.

Do you feel this content is inappropriate or infringes upon your rights? Click here to report it, or see our DMCA policy.
jack blackkyle gasstenacious dtenacious d in post-apocalyptoTenacious D in The Pick of Destiny

More about Tenacious D in Post-Apocalypto