Really, it's baffling, because Wreck-It Ralph swam in nostalgia for what it portrayed as the "golden era of the early 80s, a time in which arcades, quarters, and pixels ruled the minds and wallets of young people," as I wrote back in 2012. (In his positive review for Screen Anarchy, Eric D. Snider described it as "a bubbly, buoyant treat with near-Pixar levels of heart."

As the past six years -- and Steven Spielberg's Ready Player One -- have reinforced, nostalgia itself is not enough to make a compelling drama, which is why I felt that the first Ralph succeeded where others had failed: "Yet even if you've never been tempted to pick up a game controller, the movie turns out to be built around a very sweet father-daughter relationship that reaches far beyond the constraints of its environment."

The sequel attempts to perform a similar nostalgic resuscitation with the internet, though it looks and feels and smells like the modern-day internet, filled with advertising and overwhelmed by commercial interests. (Ill-advisedly, it also attempts to portray pop-up ads and too-frequent notifications as good and helpful devices.) While the earlier film was likewise filled with product placement, it was set in a playful environment of entertainment, bringing gaming characters to life with vivid imagination.

The new adventure struggles to recreate that arcade game atmosphere in the digital world of the internet, centering around Slaughter Race, a nasty-edged racing game that is especially appealing to young Vanellope (voiced again by Sarah Silverman). She becomes friends with the game's champion, Shank (voiced by Gal Gadot, known for her appearances in three Fast and Furious films before breaking out big in Wonder Woman). Slaughter Race, and the possibilities it unlocks, prompts Vanellope to begin questioning her place in Sugar Rush, the arcade racing game in which she is the undisputed champion.

Joining her on her mission is good ol' Ralph (voiced again by John C. Reilly). The big lug has tempered his anger issues and believes himself to be a protective figure, but he struggles to understand the new 'rules of the game' in the digital world. So, the father / daughter relationship Ralph has enjoyed with Vanellope over the past six years is put to the test, even as the film itself struggles to portray them strictly as good, good friends who are simply havin' some troubles. 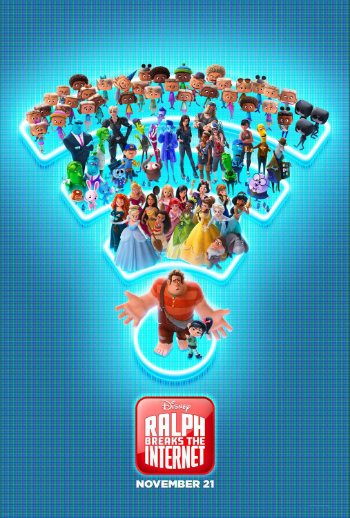 Writers and directors Phil Johnston and Rich Moore have returned for the sequel, with others contributing to the script as well, notably Pamela Ribon (Moana). None of them, however, could conquer the conundrum that ultimately slays the film: no one feels nostalgic for the commercial, advertising cluttered internet as it exists today. And the earlier days of the internet, as it was available for its burgeoning audience, was pitifully slow, far too slow for the modern world of kid-friendly animation. Where is the nostalgic affection supposed to come from? Nowhere here, according to the evidence.

Without nostalgia, and without giving away any further plot points, the sequel must rely on the relationship between Ralph and Vanellope. Although Vanellope is elevated to the role of a protagonist here, the driving force (literally) behind the plot and faced with a big decision about her future, she is undercut constantly by Ralph, which makes Vanellope more of a sainted figure, and Ralph even more of a cartoonish buffoon.

Perhaps if the environment and the assumptions made therein -- primarily, advertising is good if you just pay attention to it! -- were more appealing to me personally, or if less running time was devoted to an endless barrage of humor aimed solely at the under-5 crowd, I might have enjoyed it more. At minimum, it might have made for a more satisfying adventure.

Looney Tunes cartoons, for example, appealed to children who see the physical humor and to adults who recognize the verbal jokes and jabs as social commentary.

Lacking any such dimensionality, Ralph Breaks the Internet is far more limited in its appeal. Running 112 minutes, it is 11 minutes longer than the original film, but it feels even longer.

Review originally published in slightly different form at Dallas Film Now. The film will open in wide release in theaters throughout the U.S., Canada and selected territories elsewhere on Wednesday, November 21, before expanding worldwide in the coming months, through February 2019. Check local listings for details.

Do you feel this content is inappropriate or infringes upon your rights? Click here to report it, or see our DMCA policy.
DisneyGal GadotJohn C ReillySarah SilvermanTaraji P HensonWreck-It Ralph