Review: WRECK-IT RALPH Is a Warp Zone to the Next Level 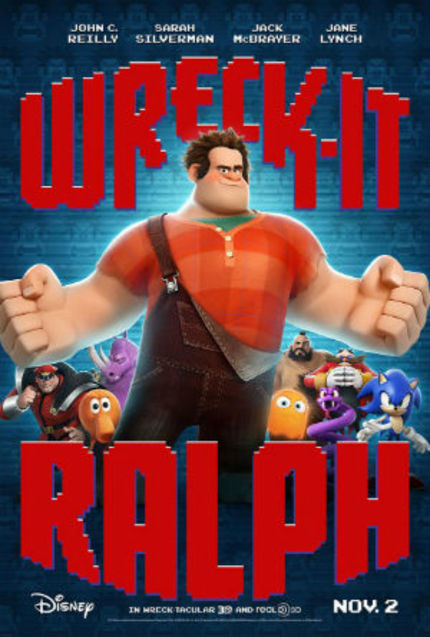 Whichever Disney employee said, "Let's do Toy Story but with video game characters," I hope he or she got a big fat raise, if only to compensate for the seething jealousy coming from co-workers kicking themselves for not thinking of it first. It's the kind of forehead-smackingly obvious concept that often results in a cash-grab -- I think sometimes the makers of kids' movies take the expression "It practically writes itself!" too literally -- but Wreck-It Ralph is a bubbly, buoyant treat with near-Pixar levels of heart.

The conceit is that the computer-generated people and creatures that populate video games have lives of their own apart from what happens on the screen. After hours, they travel through the extension cords and power strips to other games in the arcade, where they socialize with friends like Broadway actors after curtain call.

Among them is Wreck-It Ralph (voiced by John C. Reilly), a giant-handed lummox whose job is to destroy stuff in Fix-It Felix so the game's goody-two-shoes title character (Jack McBrayer) can repair it. In other words, Ralph is the bad guy. But he's not a bad person! He's quick to point this out -- not that we need him to, since having the voice of John C. Reilly already signifies that his oafishness is good-natured and harmless.

Ralph struggles with his role in life. "It's hard to love your job when nobody likes you for doing it," he says at the support group for video game villains, where his fellow bad guys (a Pac-Man ghost, Bowser from Super Mario Bros., etc.) nod sympathetically. The characters in his own game treat him like a pariah, not having realized yet that the game -- and thus their very existence -- would be pointless without him.

The movie is about Ralph's quest to prove that he can be a hero too, a mission that takes him into a modern first-person war game and then to a racing game, Sugar Rush, set in a candy land. (The arcade where Ralph lives has consoles from the early '80s, now deemed retro-cool, as well as the newer ones that have ultra-realistic graphics and take eight quarters to play.) In fact, the bulk of the story takes place in Sugar Rush, where Ralph meets Vanellope (Sarah Silverman), a little girl who's ostracized by her peers for being a "glitch" (she occasionally freezes or disappears for a split-second) and wants to prove herself like Ralph does. Meanwhile, Felix and a tough female sergeant from the war game (Jane Lynch) search for Ralph, desperate to bring him back to Fix-It Felix before it's declared out of order -- a death sentence for a video game.

It's difficult for a movie whose characters are all digital creations to make the audience feel like any of it matters, and the stakes in Wreck-It Ralph do seem low. Woody and Buzz are physical things that can be torn apart or incinerated; Ralph and Vanellope are 1's and 0's made out of electricity. But the film does everything in its power to present its convoluted reality in terms we can understand, including a generous portion of perspective shots that take us into and out of the game consoles so we get a sense of what the world looks like from the characters' point of view. The in-world explanation for how first-person-shooter games work is surprisingly sophisticated, though I suspect every kid in the audience will have no problem grasping it.

Directed with an appropriate sense of lunacy by Simpsons veteran Rich Moore, the movie provides enough cameos by familiar game characters to make fans happy without alienating those of us whose firsthand gaming experience ended with Super Mario Bros. And the screenplay, by Jennifer Lee and Phil Johnston, is full of good lines (Pac-Man is a "cherry-chasing dot-muncher") and a plethora, maybe two plethoras, of puns, especially in the candy world (which is ruled by a dotty king voiced by Alan Tudyk doing an Ed Wynn impersonation). Characters there have names like Taffyta Muttonfudge and Crumbelina De Caramello, which delights me to no end.

You can't help but like Ralph, of course, the sort of lovable misfit who's been at the center of about 90 percent of animated Disney features. His friendship with the scrappy Vanellope is cute, and I'm impressed by the film's theme of turning weaknesses and disabilities into strengths. (I also like that glitchy Vanellope is said to suffer from "pixlexia." Sue me, I'm a sucker for wordplay.) The film's weightlessness keeps it from being an instant Disney Classic®, but it's as breezy and fun as a game of Frogger. Unless you think Frogger is boring, in which case it's as breezy and fun as whatever is currently considered breezy and fun. Oh, man, I'm so old.