REVIEW: Can You Ever Forgive Me? is a brilliant bookmark of a biopic for Melissa McCarthy's dramatic chops as the late disgraced writer Lee Israel 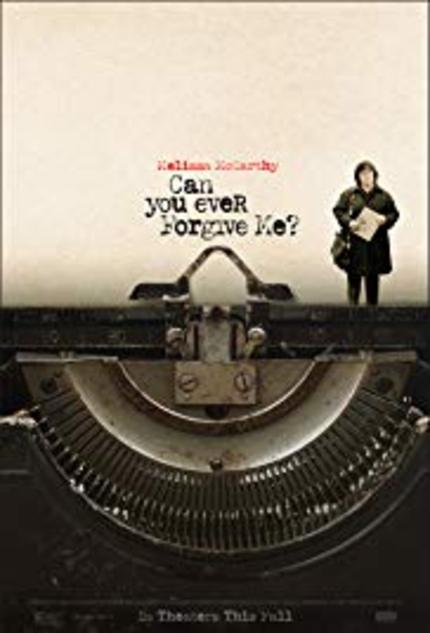 The creative process, especially in the realm of literary circles, can sometimes be a demanding undertaking. The writer's goal is to show passion for his/her written work based out of conviction and cause. The result, hopefully, would transpire into a considerable read for the masses to appreciate and revere unconditionally. Such acknowledgment and praise should be anticipated for the committed novelist grounded in financial recognition and a heralded reputation. Unfortunately, this was not the case for real-life scriber in the late Lee Israel whose writing ambitions got lost in the shuffle--a confliction that would eventually embrace a personalized deception for the shamed page-turning pariah.

In director Marielle Heller's ("The Diary of a Teenage Girl") mischievous and darkly compelling Can You Ever Forgive Me? she delivers a capable literary dramedy that recalls the fraudulent tendencies of author Lee Israel and her descent into law-breaking chicanery courtesy of a wounded pride.

Based on a true story, Can You Ever Forgive Me? examines the emotional detachment of a desperate woman whose literary potential is squashed due to changing times and meatier preferences in literature. Interestingly, Melissa McCarthy ("The Happytime Murders") is devilishly inspired as the disgraced writer Lee Israel. It is an uncharacteristically dramatic role for the usually bubbly McCarthy that essentially made her bread and butter on lightweight comedic turns in movies and television. However, McCarthy's penetrating performance as a flawed feminine wonder corrosively stuck in her ambitious misdeeds in the name of artistic rejection is an absolute revelation--something that Oscar-worthy nods are deemed with affirmation.

The New York-based writer Lee Israel was once a modestly successful author in the heyday of the '70s and '80s thanks in part to her celebrity biographies that profiled such Hollywood hotshots as Tallulah Bankhead, Estee Lauder, and Dorothy Kilgallen. Israel, while never considered a big name in dishing out the celebrity exposes, still made a comfortable living within her writing genre. However, as the '90s rolled in Israel's brand of celebrity tell-all books grew stale and were eventually dismissed in favor of other topical fodder by the finicky readers. Hence, her income is drastically affected and her relevance reduced to a mere footnote as a one-time producer of guilty pleasure celeb tomes.

Lee Israel is facing a piercing uncertainty too painful to confront with constructive reasoning. She is drinking heavily. She is avoiding people and prefers the company of cats only. She feels the rigors of failure from uneasy criticisms coming from colleagues such as Tom Clancy denouncing the weakness of vulnerable novelists. Her agent Marjorie (Jane Curtain) warns Lee that her written stuff is old hat and that her erratic image needs serious tweaking thus ruining her profitability. Clearly, Israel is in self-destructive mode and there is no telling where her downward spiral would lead. Sadly, a cat-loving alcoholic with the need to push dismissive Fanny Brice biographies on the reading public is an obvious tough sell. Gradually, Israel's psychosis build-up is something a bit more notorious beyond a two-ton case of writer's block.

In between her constant bar-hopping and being holed up in her cluttered, feline-urinating smell of a compact apartment, Israel stumbles across a couple of nostalgic written letters by comedian Fanny Brice at the local library. Using the Brice correspondences as a "tool" to test the lucrative waters, Israel finds out that there is a steady market for antiquated memorabilia. So capitalizing on how these type of old-fashioned letters can draw big-time money from rabid collectors Israel decides to pull a scam by passing off her own letters (with the help of an old typewriter) and writing them in the distinctive style of such notable writers from yesteryear. Alas, Israel has found her niche (and money-making prowess) in the deceptive form of imitating the talented likes of Ernest Hemingway, Dorothy Parker, and Noel Coward. Falsely, Lee Israel has finally arrived!

Despite Lee's despicable deeds, she is on top of the world...or so it appears on the surface anyway. The incessant drinking continues as it seems that every barstool has Lee's name stamped on it. It is at New York City's oldest gay bar called Julius' that Israel cements her co-criminality with Jack Hock (Richard E. Grant), a gay drifter and ex-con. Both he and Lee have something in common besides their love for booze and bilking people out of their savings. Much like Lee, it appears that Hock was shunned by the literary crowd and could never realize his potential as a writer either. As sad and pathetic as they are as a duplicitous duo Lee Israel and Jack Hock have each other to lean on for companionship to ease each other's lingering loneliness and despair. Lee, in particular, is hardened and burdened by her elaborate forgeries to let anyone get close to her intimately. Even one of her buyers in Anna (Dolly Wells) demonstrates some affection to the indifferent Lee but to no avail. The closest person to Lee's closed heart is partner-in-crime Jack and even this convenient bond is predicated on superficial deceit.

Can You Ever Forgive Me? is the film adaptation from Lee Israel's memoirs. Heller does a fabulous job in presenting this confused and cunning woman and her crooked cohort as inescapable casualties of their wrong-doing. Israel and Hock are abhorent in their behavior but one almost reserves sympathy for the misguided paths these broken souls have taken. McCarthy ably demonstrates the insecurity and intolerance of an alienated artist stripped of her creatve soul. She is an outcast left to her own disturbing devices.

McCarthy is in big-screen redemptive mode with a knockout turn that is sure to bury the less-than-stellar comedic bombs she had been featured in as of late. As her unctuous partner-in-crime, Grant is just as solid as an Oscar nomination should be considered for his seedy efforts in this dark, witty vehicle. Heller's steady direction and the impishly cynical script from screenwriters Nicole Holofcener and Jeff Whitty shrewdly holds together Can You Ever Forgive Me? as one of the refreshingly bold biopics released this year.

Do you feel this content is inappropriate or infringes upon your rights? Click here to report it, or see our DMCA policy.
Can You Ever Forgive Me?celebrity profilesdeceptionMelissa McCarthyNew Yorkoutcastswriter