Blu-ray Review: Criterion's THE PRINCESS BRIDE Whiffs On New Features, But You're Going To Buy It Anyway

If you’ve ever owned this film on disc before, you probably have some of this material. But you love this film, so shush. 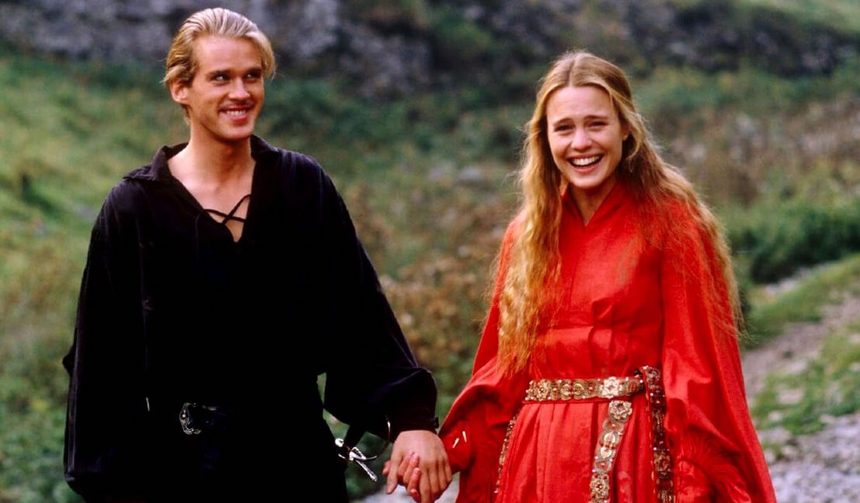 Perhaps the worst confession I could make at the top of this review of Criterion's glittery new Blu-ray release of Rob Reiner's The Princess Bride (spine #948) is to offer up the fact that I haven't seen the movie, or cared to see it, since I was a kid.

When I was a kid, I loved it. It ranked with Back to the Future as one of the all-time great theatrical screenings of my 1980s filmgoing. I came out of that movie floating on an excited cloud, and spent the entire car ride home propulsively jibbering to my cousin/best friend about every single thing we had just seen in the movie we had just watched.

I saw it a bunch more times as a teenager and by the time I was twenty, I was done with it. The quotable lines were more irritating than memorable. The cult of adoration that persists around the film was tiresome, and later off-putting.

I half-expected to re-encounter the film for this review and fall completely in love with it again as an adult, but no such luck. The Princess Bride remains a great film for children -- and I suspect that if you did, indeed, love it as a kid, you will always somewhat love it, as I found while I was watching it this weekend -- but for grown-ups, I like it about as much as Kraft Dinner, which is a lot, but only when I'm not feeling well.

You all already know the story, but just in case: Westley and Buttercup (an appallingly young Cary Elwes and Robin Wright, respectively) love each other a whole lot. Westley goes off into the world to make his fortune and disappears. Buttercup gets engaged to a prince. The fairy tale version of "all hell breaks loose" happens, involving a giant, a master swordsman, a Sicilian, a six-fingered man, and Billy Crystal in heavy makeup.

The new, 4K transfer on Criterion's Blu-ray is fantastic. Rob Reiner is hardly the most visually imaginative filmmaker of the '80s, but Adrian Biddle's photography finds a lovely and delicate line between stagey-ness and realism (sometimes quite literally, as The Princess Bride sometimes leans into its sound stage-bound set pieces with a wry wink at the audience -- see the swordfight on the Cliffs of Insanity, for example). Colours are rich and exterior scenes are occasionally jaw-dropping: Robin Wright's pinpoint horseback ride into camera across a carpet of red leaves, while wearing a red dress, is reference material quality.

The film's handful of optical effects are seamlessly integrated in the transfer (much more so than they ever were on VHS, or DVD either for that matter). Locations look impressive and interior set design keeps up with them. It's a great-looking disc.

One of the most attractive aspects of the announcement of Criterion's release was the sheer quantity of additional material they'd seemed to cram into the disc, especially in an era when many Criterion discs might include two special features, at most.

Unfortunately, the most you can probably say about the release is that if you buy it, you can safely throw out your previous copy. Material from at least 3 previous home video releases of The Princess Bride fattens out the package, and the new content produced by Criterion for the 2018 release gets slightly lost in the shuffle. It's worth digging for, though.

The best of the new material is Columbia University professor Loren-Paul Caplin discussing William Goldman's screenplay for the film, based upon his own novel. It's a deeply insightful look at the writer's work that traces his approach to writing across his whole pantheon of filmmaking, from Butch Cassidy to All the President's Men, landing on The Princess Bride as a genre departure that both resists and sums up his overall output.

It's one of the few features on the disc that underlined (with a red pen) an aspect of The Princess Bride that I ended up doing a lot more thinking about. Goldman's screenplay is, indeed, a structural marvel, as light and tight as a well-built sportscar, glistening in its utter lack of fat and powerful in its emotional sticking point, the grandfather's last line. (The featurette also reveals that the script did, indeed, have a different ending from what ended up in the film.)

The oddest new feature, on the other hand, is a detailed look at a tapestry of The Princess Bride that Goldman commissioned and has hanging in his home. If you're... into wall-hangings? This is for you?

Commentaries from 1997 (one featuring Reiner, Goldman, Crystal, and Peter Falk, from the company's laserdisc release of the film; the other featuring Reiner's audio-book reading of Goldman's novel, edited to match the film) are included. Featurettes from 2007 focus on Crystal's makeup, and more enjoyably, Bob Anderson's choreography for the film's two swordfights.

There are also, by my measure, at least three separate video pieces that involve Reiner, Wright, Elwes, or all three, exclaiming about how The Princess Bride has lasted a really long time and people still love it and so on and so forth. It's more than we need.

More enjoyably, some footage from the production of the film by Elwes is narrated by Wright, broken into five separate videos. A trove of publicity content is also included.

If your appetite for The Princess Bride is bottomless, perhaps this massive archive of content is right up your street. In either case, the whole thing comes packaged in a lovely, pale purple "book" style Blu-ray case with gold artwork on the cover, and a leaflet that contains both the usual essay, and a bit of introduction from Goldman. It all looks great on the shelf.

Between this and The Breakfast Club, I continue to hunger for Criterion to find ways to release other classic "blockbuster" style movies, even if it's not particularly what they're known for. (Where's that Robocop re-release?) The company has a film geek's passion for the minutia, and their in-house supplemental content is the best in the business.