Damien Chazelle and Ryan Gosling reunite for a story that is about absolute life-and-death struggles. 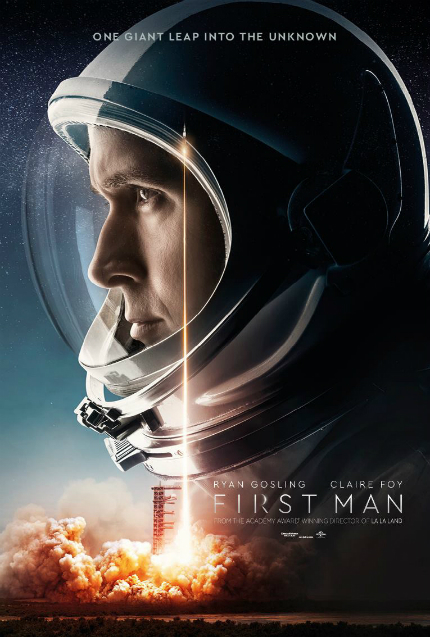 Damien Chazelle has not disappointed. Now onto his third excellent feature in a row, safe-hands Chazelle seems to be on a roll that knows no bounds -- and in many ways, First Man is a perfect, meteoric success.

Perhaps Chazelle's latest will lack the furious alacrity of Whiplash and the glorious, sunny grandeur of La La Land for some, but his continued partnership with Ryan Gosling has definitely added yet another talented installment to what you could see as his triptych on "what leads people to do extraordinary things in the face of adversity." Plus, First Man is definitely an anxiety-inducing, intense experience, even if it is different in tone to Chazelle's debut.

In fact, what's particularly interesting about this third "passion" piece is the fact that First Man not only sees Chazelle break the mould, but sees him refuse to enter it altogether. If La La Land was the reinvention of himself as a director with a real gift for music-driven cinema, then this latest bio-pic about Neil Armstrong's journey to become the first man to ever step on the moon is practically a V-sign to the possibility that Chazelle could even be type-cast at all.

Gone are the dreamy blues of La La Land and the relentless clamour of Whiplash. This time Chazelle thrusts us straight into a harsh, measured world, filled with a flight deck full of stark, muted colours. What a brilliant pallette of colours this movie has, though! Cinematographer Linus Sandgren has done a truly stellar job of recreating the rich, almost soft-focus colours of 1960s Polaroid or 8mm home movies, giving this movie a wonderfully authentic, throw-back feel.

But despite this sort of visual nostalgia and the moments of wonderful lightheartedness in First Man, the movie does a brilliant job of contrasting our collective memories of this iconic voyage with how gory and gritty it was in reality. Whether that be through the vomit that the trainee astronauts wipe from their jump suits, or the fly that glibly finds its way into their supposedly super advanced and precision-crafted cock-pit. The dark humour in these moments is profound, but it never causes Chazelle to lose sight of the fact his story, first and foremost, is one of absolute life-and-death struggles.

In fact, even before the movie starts, we're primed for a pretty nail-biting experience. The Universal Pictures and Dream Works credits play out in eerie silence, and it's only almost with uncertainty that you gradually notice the crescendo of a gentle, rattling buzzing. Slowly it grows, until soon it becomes a maddening rush, and the film suddenly bursts open to reveal Gosling in a bleak cock-pit.

Instructions are barked at the bleary-eyed man in the driving seat, and a wider shot reveals that his craft sits in the loading bay of some bigger plane. What we see is almost chiaro-scuro, the camera shakes furiously, and traces of fear twitch across Gosling's face as he plays a young Neil Armstrong (experiencing major G forces). Suddenly, a hatch pops, and our vision is engulfed in a hazy, blue sky as a rocket-plane lunges out.

Sitting in a hurtling, navy-blue NASA X-15, Armstrong struggles to keep up with the rapid demands that are made of him as he initiates a muffled boom and is launched him into one of the fastest hypersonic speeds man has ever known. With a very visceral force, he's soon propelled out of our atmosphere, where the screen suddenly turns black, and he's ordered to commence his decent.

One thing that's really rather wonderful about scenes like this is the way that so often fades to black in the movie can actually come in the form of outer space itself. Equally, white outs can come in the shadows of giant rocket exhausts, and rather wonderfully, it's almost as though it seems like the language of cinema is shortened or tautened, lobbing you at breakneck speeds into sharing Armstrong's experience.

So, in this instance, in the ever quick-fire series of events of the film's opening, the intercom suddenly alerts our edgy pilot that their systems show he is "bouncing" off the atmosphere, rather than returning to Earth. Now Chazelle definitely throws lots of technical jargon like this at us, without ever stooping to compromise to provide us with some exposition, in First Man. But frequently, things spiral as fast as they're noticed, so we're rarely even allowed time to notice whether we've understood or not. Sometimes this dialogue is a bit heavy, but for the most part the speed of First Man certainly produces an incredibly cinematic, nerve-wrecking experience.

Plus, by repeatedly pitting Armstrong against these terrifying life-or-death situations, the movie manages to draw some fascinatedly mixed responses out of the character (all delivered with a pretty skilled, dead-pan ambivalence by Gosling). On the one hand, Armstrong is clearly not immune to fear: despite being an almost mythic figure of history now, he experiences the pain of extreme G-force like any other, and is just as susceptible to fear of death. But what First Man does seem to draw out as a trait that made Armstrong almost superhuman was his ability to keep thinking under desperate pressure.

Whereas what seems to make Armstrong's character seem so brilliantly human in this film is his weird ability to become almost as equally laconic and clammed-up when he is terrified. It's a kind of culturalised undemonstrativeness so strong that it's fascinating in its own right, and something that we definitely see him also studiously applying to his personal life, as Chazelle slowly unravels the backdrop that made Armstrong the man he was.

Surtitles explicitly tell us it's 1961, and we follow the pilot back to his home in Juniper Hills. The contrast is striking, as we see Armstrong shift from the apex of human advancement and scientific spending to a small family cabin in a rural part of California. Everything seems almost imbalanced, even overly spartan, and yet at the same time Armstrong and his family do seem to have a little slice of everything they could need.

That is, except for a cure for the brain tumour that we learn their daughter Karen is suffering from. It's with great controlled grief that we see Armstrong researching his daughter's treatments, and it clearly causes this young, highly educated family great pain when modern medicine is unable to save their daughter. This moment is the real crux of First Man, and Chazelle gradually sculpts for us the theory that it is this deep personal pain that drove Armstrong to become such a key part in overcoming the huge challenges that beset the Apollo missions.

Again, what is brilliant here is the ambiguous depth that comes with this theory that Chazelle explores. Armstrong is clearly not interested in transcending the limits of our world to become closer to his daughter in an almost religious sense. Nor is he simply throwing himself into something immensely difficult to suppress memories of his grief. Certainly, at times it seems as if this might be the case, but in truth, there is a personal symbolism and emotional motive in Armstrong's actions which is almost never truly labelled in the film.

This resistance by First Man to label things and say them explicitly goes perfectly hand-in-hand with the depiction of Armstrong as a demure, withdrawn, almost unremarkable figure. But First Man also goes much deeper than that, until it almost becomes an exposition of a certain kind of educated, middle-class American white culture, something to which the film does make direct references. In fact, First Man delicately explores the ways in which this kind of taciturn culture can be passed amongst families and individuals, but also the kind of damaging effects it can have. Not to mention the effects that the sort of toxic, self-policing masculinity it creates had on Armstrong himself as he reached for the stars.

Plus, Chazelle has clearly learned from the mistakes of his painfully male-centric Whiplash, by casting Claire Foy as an important female perspective on Armstrong's experience. That said, I'm not sure that means First Man would definitely pass the Bechdel Test with flying colours. Nevertheless, this side of the movie is almost as important as the NASA sequences, and the shooting style changes wonderfully in the film's domestic settings to mimic the kind of hand-held home movie style that people were experimenting with amongst their families in the 1960s.

What's more, I think Chazelle is deeply conscious of the stories (like the troubles faced by women) that he is sidelining in First Man. Repeatedly, the director cuts from the hardships that Armstrong is facing in space to the the battles that Mrs. Armstrong is facing at home. And equally, the film explicitly references the damaging impact that the money spent on building a "space force" in the 60s had on lots of struggling communities in America.

Another thing that First Man does extremely well is lay this context of the moon landings against the backdrop of the Vietnam War. Rather than simply using that as a raging background, Chazelle shows masterfully how the NASA space programme was very much part of the same war between Communism and Capitalism. Repeatedly, the characters pushing themselves to the limit reference that they're doing so to check the Russians, and as the constant casualties of extraterrestrial exploration slowly mount, First Man rather ingeniously takes on an almost war drama-like texture.

Plus, the astronauts' deaths seem to increasingly become like casualties of war, as it becomes apparent that NASA is rushing programmes so as to not be defeated by the Russians. So bit by bit, it even comes to seem as though Armstrong is developing PTSD, and as the challenges he faces slowly become more and more traumatic, the whole story of NASA's mission seems to swirl into this much bigger American endeavour to bloodily and recklessly fight itself into a better world.

The overarching result is really quite a subtle, thought-provoking piece of cinema by Chazelle, which even put me in mind of Matthew Wiener's carefully observed Mad Men a bit. But what's really remarkable is the fact that First Man still manages to be a deeply nail-biting thriller - one that should definitely draw those who loved Whiplash and La La Land back to the cinema.  So personally, I think it's difficult to see First Man as anything else than yet another brilliant, inspired film by Chazelle - and long may his run of Oscar-winning form continue!

Review originally published during the Venice International Film Festival in August 2018. The film opens in theaters across Canada and the U.S. on Friday, October 12.

Do you feel this content is inappropriate or infringes upon your rights? Click here to report it, or see our DMCA policy.
Claire FoyDamien ChazelleNeil ArmstrongPablo SchreiberRyan Gosling