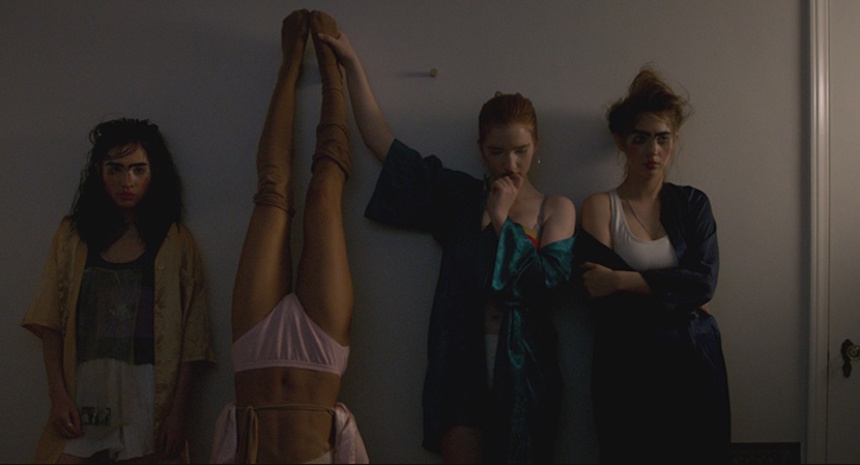 In the opening credits of Amanda Kramer's Ladyworld, we hear what we'll eventually confirm as an earthquake that has left eight young girls trapped in the house where they were supposed to celebrate the birthday of one of them.

With the house buried in the rubble, soon this group of girls -- who don't really know each other -- realize that it'll be impossible for them to leave and that it's likely that no one from the outside will come to rescue them because they could be in a similar situation of isolation.

Ladyworld suggests a complicated scenario immediately, given that the extreme situation will be assimilated in different ways by each of the characters. At the center of the ensemble we have Olivia (Ariela Barer), representing sanity, and Dolly (Ryan Simpkins), a shy and fragile young woman; however, the ideas of these girls won't be accepted by another faction of the group, led by Piper (Annalise Basso), who's more conceited than Olivia and Dolly and indisposed to accept someone else as leader of the supposed feminine democracy.

If it's already impossible for the girls to agree on how to proceed, things break down more, naturally, with the passage of time and the inevitable increase in their desperation, but also because Eden (Atheena Frizzell), the girl who lives in the house, says that there's a man inside and, eventually, disappears mysteriously. Thus, Ladyworld becomes a constant exhibition of the insanity that gradually takes over the protagonists.

Ladyworld celebrated its U.S. premiere at this year’s Fantastic Fest, where director Amanda Kramer talked with ScreenAnarchy about her minimalist debut film. 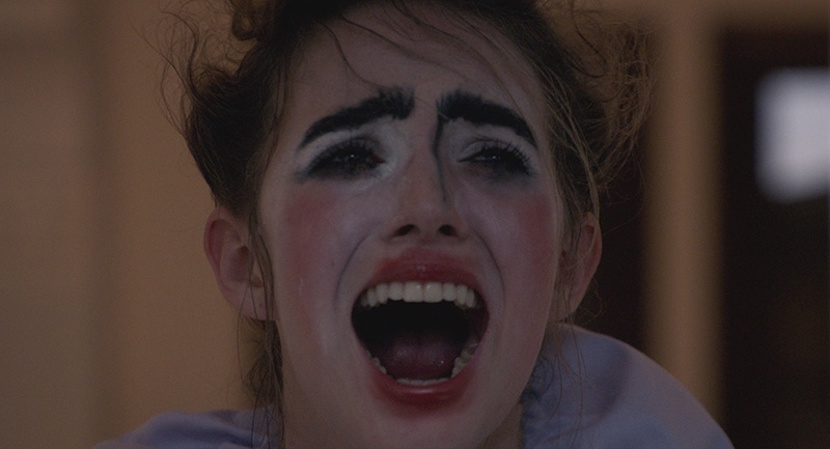 ScreenAnarchy: I really liked the setting with only young girls trapped in a house, without really knowing what’s going on outside. How was the genesis of this premise?

Amanda Kramer: I wanted to write a film about female mania and what women do when they are truly bored and young. I figured what better experience than a sweet sixteen birthday party that never really materializes into a party because it immediately becomes a disaster.

You have this ensemble cast, so what were the inspirations behind the personalities of the main three characters, with Olivia being the sort of representation of sanity, Dolly the fragile girl, and Piper the more selfish brat?

I think in all eight of them as different aspects of female psyche: logic and rationality, violent tendencies, and emotional reactions. All eight of them perform a certain dimension of that, but I prefer not really think of any of them as a villain or a hero. I think Olivia is not such a great leader, she’s a terrible leader actually, and I don’t think Piper is such a bad person, it’s not that straightforward.

So it was fun watching them play the roles and come in and out of heroics and villainy, but each one doing things against character; it’s all just about the momentary perspective, but I do love the boil between Olivia and Piper, between someone who wants to be in charge and wants to be manipulative versus someone who accidentally becomes in change and doesn’t like the fact that she knows she needs to be manipulative. Ariela and Annalise did an amazing job.

One of the notions of the movie is how women are usually competitive and it’s clear from the beginning that they will never get along and work together. I think that’s human nature in general, but what do you think about this?

It’s part of the human experience, you want to fight and struggle and make your way, it’s the problem with individualism and not communal ideologies. We are being told we should be individual and what comes with being individual comes with winning.

That’s part of my mindset, democracy is an ideal from a long time ago that we’re still enacting hopefully or trying to, and of course politically we all are crying for help and in danger wherever you live, but in our personal relationships, democracy is impossible as well and someone always need to feel that they have the leg up.

We love our friends but as soon as they get married, we’re like “that’s never gonna last”, or if they get a job, we’re like “we deserve that job.” That’s just humanity, right? Humanity is kind of treacherous.

Then the problems at this so-called democracy within the girls are bigger when the idea of a man that’s dangerous appears, but in the end it seems that they are always their own enemies, so what can you comment on this notion?

Perfectly put. The man is of course meant to be enemy, right? He’s in the house somehow, he’s found in the basement moaning, maybe wants to hurt them, maybe wants to assault them, but their main treason is sort of hurting and assaulting each other and the tensions between them is really where the tension of the film lies.

In a landscape where we watch Marvel films, and think about heroes and villains and who is bad and who is good, and we want to create these binary lines, it’s important to recognize that sometimes villainy is like a distraction tactic and really we are just fighting with ourselves, I think. 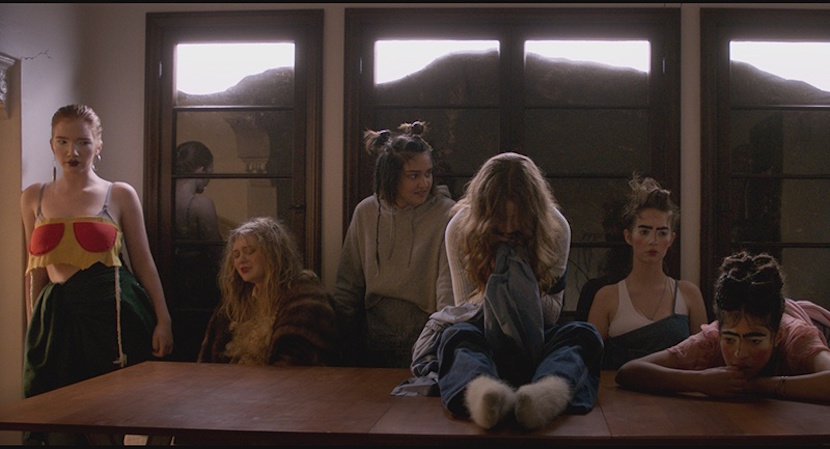 In that sense, the film becomes a sort of performance with the girls really going insane. How was the process with your cast to deliver these scenes filled with irrational actions?

Eight girls who are all eight women, I should say, who are all extremely talented, very vivid, eccentric and electric, and also friends, who like each other very much and are very undramatic on set and kind to one another; so it’s difficult to say, “I know you guys are laughing at the corner, but we have to go into a scene and you have to be vile on one another.”

But they were able to communicate that, which is a testament to great acting, that you can actually not be engrossed to melodrama and then the camera goes on and it’s all melodrama, pure melodrama, and anguish and torment. It actually worked in the end to make you not really like any of them, which is a hard thing, it’s hard to ask an actress to be unlikable, and that is what I would ask them.

It was always like, “confuse the audience, don’t try to win anyone over, don’t win me over, you just do as purely, and do it ecstatically and we’ll have something really fantastic.” And they did it.

What was the greatest challenge when doing a film entirely set in one location?

We were on top of each other, I won’t lie. I think we all started to feel like it was all coming true. After a 12-hour shooting day, in a very small house that is holding quite a few human beings, you feel that claustrophobic energy. It’s a friend’s home and I destroyed it.

Being in a single set, the main challenge is, can you keep the audience there? That I think has so much to do with the acting, if the acting is incredibly overwhelming, really sensational and compelling, there’s no need for anything else.

You just said that the acting is basically the most important thing of the movie, so how was the process to find the right actresses to play these characters?

It was very challenging. The acting is everything, I have no tricks, my tricks are my work with actors, so I don’t have any helicopters, flames or any of that stuff. In order to cast these women, I did a combination of looking into who I was a fan of and asking them if they had any friends that they wanted to suggest.

Interestingly enough, some of these girls cast each other for me. I don’t ever audition, I don’t believe in auditions, I don’t like them, so it was about conversations, phone calls and face to face encounters. You sense immediately if they are right.

When I met Odessa [Adlon], she was late, she was like hopping on one shoe [laughs], and I thought to myself, I have to have her, she might potentially be a wild card that I can’t necessarily control but I think that being out of control with her might work perfectly. We had a beautiful chemistry because of that and I didn’t have to ask her to do any line reading, I just knew that she would be good. I think it worked.

You preferred to leave many questions without an answer. Why did you decide to make LADYWORLD a film that’s very much open to different interpretations?

In the world that we live in now, with information, social media and all of that shit, nobody really appreciates a mystery anymore. Everyone wants everything handed to them and they want to know. But some of the mysteries of life are compelling, specially in art, art should be unknowable, untouchable, it should give more questions than answers.

I’m not a filmmaker who has a message, I have my feelings and I have my traditions, and the things that excite me in writing, theater and acting, but I would much rather just be engaging and challenging than anything else. Obviously, the idea that someone would come away from the film with their own theories, that’s far more exciting to me than keeping things in a box. I want to create conversation and engage in conversation and I want my film to not just immediately be forgotten.

Do you feel this content is inappropriate or infringes upon your rights? Click here to report it, or see our DMCA policy.
amanda kramerAriela BarerAtheena Frizzellfantastic festfantastic fest 2018ladyworldOdessa AdlonRyan Simpkins