But beware Russian epics about the burdens of faith and artmaking. 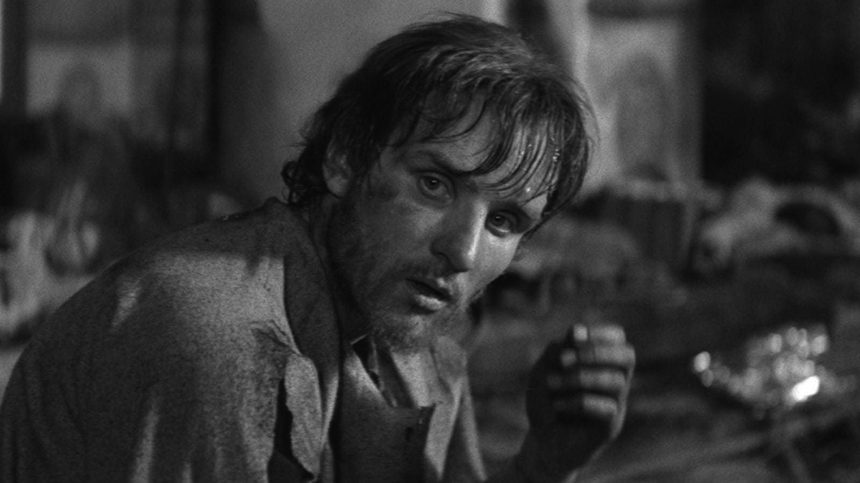 I've noticed a trend in recent Criterion releases: the paucity of the special features. The default mode seems to have become one or two newly-recorded interviews, an archival video feature, and the in-jacket essay.

This is a sign of the times. There was a time (Criterion, itself, helped invent it) when home video became as fascinated with the making of the film as by the presentation of the film itself; this trend bounced along from laserdisc to DVD to blu-ray. On the latter two formats, I suppose it was presumed that if you picked up a disc in an HMV and saw that it was $30, you'd immediately flip it over to see what else you were getting for your money, since thirty bucks tends to be higher than we internally locate the "value" of owning a film.

Now that physical media is on its way out (with all the attendant risks of same), that conflict between assumed value and actual value is gone with it, but one would expect Criterion to hang on to the old ways as long as possible. For the most part, they have, but it's been a good while since I've seen one of their releases come out as fully loaded as their blu-ray refresh of spine #34, Andrei Tarkovsky's Andrei Rublev.

The package comes with not one, but two, three-hours-plus editions of the film. The 183-minute Andrei Rublev is on disc one and the 205-minute The Passion According to Andrei sits on disc two. The latter is Tarkovsky's original cut (and title) of the film, which was suppressed by Russian authorities after a single screening. The proper Andrei Rublev on disc one is reputedly the "director's cut" that Tarkovsky ended up preferring, which itself barely made it to the West, following a few abortive attempts to cross the Atlantic by way of Cannes in the late '60s.

I did not have the courage to attempt a full screening of the longer edition of the film -- more on this in a bit -- but the diligence here is appreciated. The shorter version is stunningly restored and given ample room on its platter to make the most of your home theatre. There are a few instances of visible scratches early in the film but for the most part, it looks as though it were photographed yesterday.

Grain detail is lovely throughout, and the film features some of the most striking low-light sequences you will ever see. A lengthy scene where Andrei Rublev encounters nude, torch-bearing pagans beginning a rite of spring is a thrilling phantasmagoria of night, fog, and water. And if you want to appreciate the difference a good restoration makes, just pop a couple of the same sequences on as they appear on disc two, which has not been restored. They're contrasty, chunky, and spackled with dirt. Given that the first DVD of Andrei Rublev was released by Criterion in '99, this update has been long in coming.

Porting over from the original version of the disc are some scene-specific commentary by Vlada Petric, but Criterion fattens the new release out further with a bevy of new and archival material. Tarkovsky's student film, Steamroller and Violin (a whopping 45 minutes), is present, as are two featurettes about the production from 1966. The Three Andreis is a canvas survey of the production made by Dina Musatova, one of Tarkovsky's film school colleagues. On The Set Of "Andrei Rublev" is about five minutes of silent colour footage behind the scenes of the production itself.

All of this is further supported by a new 30-minute documentary called Tarkovsky's "Andrei Rublev": A Journey, which tracks the whole production of the film via new interviews several of Tarkovsky's collaborators. Conversations with actor Nikolai Burlyaev and cinematographer Vadim Yusov, along with Olga Surkova (Tarkovsky's personal assistant), are worth watching. Burlyaev played Boriska in the film, a teenaged boy charged with making a bell for the Tatar prince (at the cost of a beheading, if he fails), in what becomes the film's most magnificent overall sequence.

Less a plot than a series of unconnected vignettes (each of them named: "The Raid," "Silence," "The Bell," etc.), Andrei Rublev unfolds as a contemplation of the chores and duties of artistic endeavour, and one's relationship to the society one serves, in a black and white Russian medieval world. As such, it's not for the faint. (And/or: get yourself a coffee before you start.)

Tarkovsky evokes a brilliantly tangible time and place in his medieval Russia, one that dotes upon rain and dirt and wind and snow with a fervour that precedes Malick or Kawase. Some sequences are magnificent in scope. A Tatar attack on a small city would not look out of place in a Kurosawa film, full of pathos and passion. (The death of an unnamed woodcutter, lifeblood pumping from a neck wound as his metal saw trembles and whimpers nearby, is a stunning image.)

Throughout all of this, however, Rublev himself -- a monk and painter of religious icons, who (after his death) would go on to define the form, and therefore all of art, for generations to come -- is less a character than a cipher. Similarly, many of the sequences, some of which stretch as long as 30 or 40 minutes, are less stories than tableaus upon which to lay haunting imagery, some of which count among Tarkovsky's best.

Nonetheless, one can understand why American audiences expecting a Russian epic in the Doctor Zhivago style were left stunned and disaffected by Tarkovsky's mega-length contemplation of the divine and meditation upon his art. (A brassy move, indeed, for a second feature.)

It's all quite on the nose in the bell sequence, at least; Boriska's fervent, faith-only insistence that "only he knows the secret" of how to properly create the church bell is an easy allegory for the weird human foible of artmaking itself. Tarkovsky lenses it spectacularly (and Burlyaev plays it beautifully), as the bell pit is dug and the clay mold constructed and, indeed, an immense object of veneration pulled from it by teams of local craftsmen, with palpable tension as soldiers surround it to see if it will in fact ring.

Tarkovsky saves "god's eye" shots for moments exactly like these, where we may presume that the deity is, indeed, watching humanity's silly endeavours -- and perhaps imbuing the human creators, whether they be Borsika or Rublev himself, with some of their inspiration. Notably, the film opens with an entire sequence which perhaps reframes this idea, in which an unidentified man constructs and flies a hot air balloon from the parapet of a church, to the chagrin of the local townspeople.

Here, too, Tarkovsky uses a god's-eye shot (and a jaw-dropper, at that), but in this case, it's the point of view of the man himself, who has dared to ascend the heavens and slip the bounds of conventional human endeavour. He crashes to earth pretty quickly, of course; but the visual linkage is clear and beautiful.

None of the artists or artisans later in the film get such deific treatment. They merely struggle with their burdens and attempt to understand their purposes in a world where Christianity is under assault from earthly torments both literal and figurative. One monk goes mad and beats a dog to death just offscreen (and now I know where Paddy Considine got the idea for Tyrannosaur). Rublev, meanwhile, quietly carries his burden, and learns to accept it. As the phantom of an artistic peer later tells him, "Live between divine forgiveness and your own torment."

Do you feel this content is inappropriate or infringes upon your rights? Click here to report it, or see our DMCA policy.
Andrei TarkovskyBlu-rayThe Criterion Collection