In her infancy, she survived the death of her father. Growing up in a post-apocalyptic world, somewhere in the North American woods, she learned how to take care of herself and provide for others. She is careful and cautious and unafraid. She is well-armed and well-prepared.

Now aged 19, she has suffered the recent loss of both her younger brother and her sickened mother. Some sort of plague continues to claim victims, and so she is left completely alone, isolated in a mountainous region. That's fine; she feels no self-pity, it's just the way it is. As surehandedly portrayed by Lulu Antariksa, Anna is a very capable young woman with an eagerness to learn more about life. Yet, she is always watchful.

So when a stranger approaches her cabin, secured behind a wall, she is naturally suspicious. He's a fine-looking, thirty-something fellow and speaks calmly and kindly, and, well, Anna is alone and has been isolated from all people other than her family for her entire life. And so, she lets down her guard, reluctantly, to a degree. But she's still watchful.

In What Still Remains, writer and director Josh Mendoza creates a world that appears placid. For all the danger that lurks around every tree, the only initial hint that things may not be what they seem comes from Jonathan Beard's foreboding musical score, full of minor key noodling. 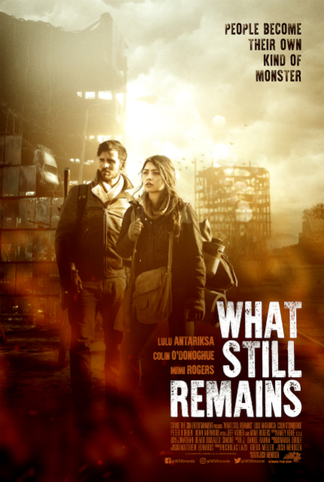 Anyone who has seen one or two post-apocalyptic movies, however, knows that the bearded man's invitation to Anna will lead to trouble. The bearded man, named Peter (Colin O'Donoghue), may speak softly but he carries a big stick: not only his knowledge of weapons, but also his much-wider experience with other people.

He tells Anna about his community, a village where other survivors have made a life for themselves. He asks Anna her feelings about spiritual matters; she's acquainted with the Bible, at least superficially, and that sounds good to Peter. He invites her to come with him, without giving too many specifics. And, finally, Anna lets down her guard further.

Filmmaker Mendoza matches this seemingly placid world with encounters that are mostly family friendly in content. When situations become threatening, they are absent any explicit bloodshed or much profanity, if any. Still, the atmosphere left me continually on edge; maybe not to the point that I was gripping my seat, but the uneasy mood and the definite vibe that, at some moment, surely, things have got to go very, very wrong, certainly rubbed off on me.

The lead performances are very solid, and I liked the central premise that Anna is neither a shrinking violet nor a fool. She learns from her mistakes and is always ready to defend herself and her beliefs. The supporting players include cagey veterans like Mimi Rogers, Jeff Kober, and Chris Ellis; whose suggestive familiarity bolsters their characterizations and deepens the story.

The film's quiet virtues become contagious. What Still Remains is an intriguing concoction, aware of its own limitations even as it pushes against them, without ever becoming angrily pushy or too, too aggressive. That means it likely won't appeal to genre fans more accustomed to extreme content, but it definitely kept my interest, especially as the narrative reaches its crescendo.

The film will open in select U.S. theaters on August 10 and will then be available to watch on various Video On Demand platforms on August 14.

Do you feel this content is inappropriate or infringes upon your rights? Click here to report it, or see our DMCA policy.
Colin O'DonoghueJosh MendozaLulu AntariksaMimi Rogers