Lima 2018 Review: RUBEN BLADES IS NOT MY NAME, an Okay Tribute to a Music Legend

Director Abner Benaim goes behind the scenes for his documentary on the fascinating Blades. 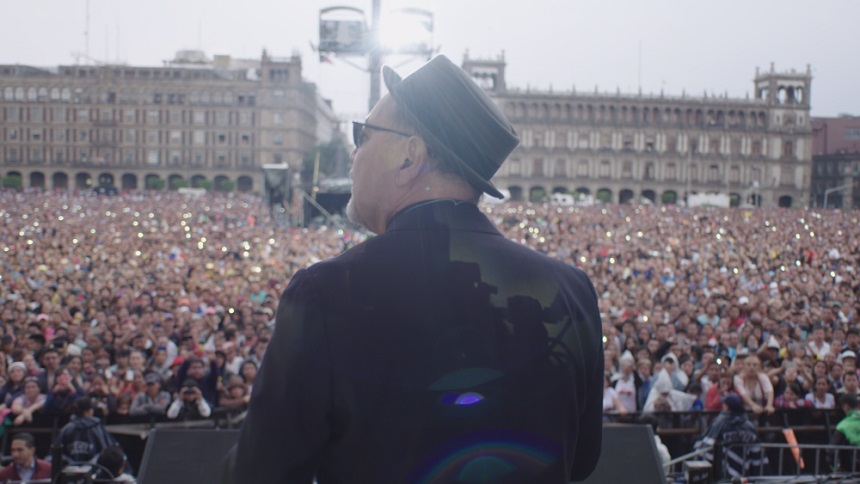 Another year, another edition of the Lima Film Festival opens its doors.

With Fiction and Documentary competitions that tend to favor dramas and social issues -- though sometimes a few oddballs stick out; this year, the brilliant Brazilian werewolf tale Good Manners and Argentina’s metaphorical head-scratcher of a monster movie Murder Me, Monster are representing genre cinema -- the Fest tends to save its crowd-pleasing lightweights for Opening Night, to gently ease audiences into its nine days of programming. Rubén Blades Is Not My Name definitely fits the criteria.

A behind-the-scenes look at salsa superstar, fine actor and all-around cool guy Rubén Blades, director Abner Benaim follows the musician in his day-to-day activities and throughout his latest (and possibly farewell) tour, charting his career on stage and on screen ever since his days with New York-based record label Fania, which practically created the NY salsa scene of the 60 and 70s and made superstars out of Latin music heavyweights like Willie Colón, Celia Cruz, Héctor Lavoe and others.  The doco also pays lip service to Blades’ acting and political careers, having ran for President of Panama in the 90s and serving five years as its Minister of Tourism in the following decade.

With such an interesting subject – Blades even has a law degree from Harvard – it’s somewhat disappointing that Benaim treats everything on a surface level, rarely dwelling on much. Then again, the musician is clearly a very private and guarded person; he rarely smiles and at one point seems desperately uncomfortable when approached by a gracious fan on the street. It’s obvious that he chose what to tell and what to keep to himself; Benaim might direct, but it’s Blades who’s steering the ship.

Blades’ intention, as he himself states, is to leave a will, some record of his legacy, and anything wholly negative to say about him is quickly brushed aside, such as a prolonged legal battle with Colón in the late 00s. One of the few times he lets his guard down is when talking about Joseph Verne, the son he publicly acknowledged only three years ago. Rubén admits to having made mistakes and it’s in very brief moments like these, when he reflects on his own life and mortality, that the movie finds some emotional truths. They’re few and far between, but they count.

More than anything, this documentary is a celebration of Blades the Musician. His talent and contribution to the genre of salsa cannot be underestimated, and seeing him comfortable on stage, belting out hits like the eternal Pedro Navaja or Patria is great, toe-tapping fun even if you’re not a fan of salsa music. The man’s a born entertainer, and even though this isn’t a definite account of his life (it doesn’t say much that fans probably didn’t already know), it makes it clear just why he’s so revered in Latin America.

All that was missing was the man himself attending the Fest, which would have given the organizers a golden opportunity to screen Predator 2.

The Lima Film Festival is held from 3 to 11 August.

Do you feel this content is inappropriate or infringes upon your rights? Click here to report it, or see our DMCA policy.
Abner BenaimRuben BladesRuben Blades Is Not My Name