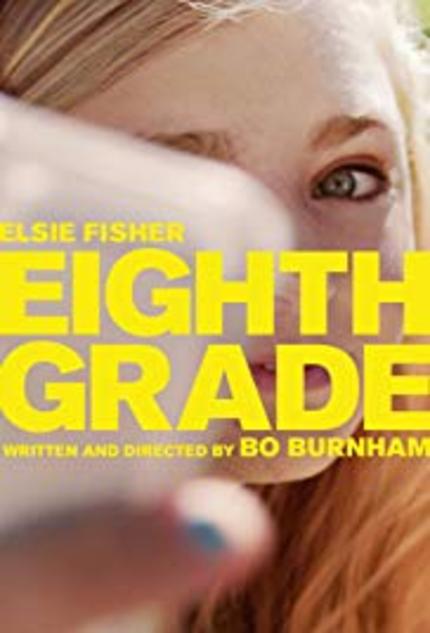 The brilliant and brutal trials and tribulations of the teen girl treachery and transitional schooling years is captured masterfully in first-time writer-director-comedian Bo Burnham's caustic coming-of-age comedy Eighth Grade. Sharply revealing, bluntly acute and charmingly acidic, Burnham's cringe-worthy ode to the middle school years of an angst-ridden schoolgirl awkwardly matriculating to the next level of hellish academic scrutiny is an impressive debut for the observant funnyman. Stunningly, Burnham is able to honestly convey the dread, anxiety, paranoia and unreasonably high expectations of an insecure 13-year old female about to embark on a traumatic discovery as she leaves behind the familiarity of her grade school "safety net".  In reliving the nightmarish rites of passage to the unknown realm of secondary school drudgery through this jeopardized adolescent many of us oldsters are forced to revisit our sweaty palms from yesteryear as well.

Indeed, the awkwardness and uncertainty of feminine adolescence is unforgiven in its roots of hysteria and stress. The conception (and eye-popping insight) is perceptively presented by the exceptionally formidable Burnham given that it hails from the mind of a late twenty-something male millennial primarily known for his You Tuber street credibility in comedy and music.  With the devilish and off-kilter Eighth Grade Burnham has solidified a resounding spot in his debut filmmaking acumen. Consequently, Eighth Grade is a bold throwback to other highly regarded dramedies about disillusioned girlie theatrics such as the scathing Welcome to the Dollhouse, sardonic Ghost World and the wildly quirky The Edge of Seventeen.  Burnham's piercing pet project is definitely in great company with these smart, ignited teen tart titles.

Burnham's talented fingerprints are not the only treasured find in this corrosive comedy. The sensational doe-eyed Elsie Fisher (from the "Despicable Me" animated series) provides a convincing raw and impenetrable performance as the shy, unsure and friendless grammar school gal who is plagued with mounting tension as she undergoes her last year just before entering the nerve-racking halls of high school horror. She is the epitome of blistering vulnerability wrapped up in self-doubt yet determined to find her stabilized voice of reason. From the loneliness and reliance on social media outlets to tackling the remainder of her eighth-grade study obstacles, Fisher's salivating take on the restlessness of middle school blues resonates with biting aplomb.

Fisher's Kayla Day is winding down her final days in middle school. She does not have what one would call a thriving social life. With high school right around the corner, the faceless Kayla has not much going on as she is virtually invisible to her classmates. In fact, Kayla's only main source of activity is posting YouTube motivational videos to an indifferent audience that would not know she existed even if she set herself on fire in front of them. Ironically, Kayla is suited to watching her own tutorials on identifying confidence than she is haphazardly giving the instructions as the rigid talking head. Shockingly, Kayla does not register in any capacity either in the classroom or the playground for that matter. Quite frankly, hers is a painful existence.

Kayla resides with her single father Mark (Josh Hamilton, "Blaze", "Take Me To The River"). For the most part, Mark is a hands-on father that cherishes his daughter deeply. Although he is supportive and understanding, Kayla feels that her Daddy Dearest Mark could be a source of embarrassment and uneasiness for her as she attempts to break into the social circles. We equally feel bad for Mark because he is responsible for raising a bewildered young girl going through some hard times.  Mark may not be as prepared to handle his daughter's aimless growing pains but he is there for Kayla unconditionally.

Instinctively, Burnham knows how to heighten the teenage-made tension and delves into the intricacies of poor Kayla's nervousness and ostracization from her unresponsive peers.  Indifferent cool kids from the in-crowd, the panic-stricken mingling at a pool party, a developed crush on a cute but klutzy classmate named Aiden (Luke Prael), up-and-down shots of relaxing in your own skin versus putting on a much-needed facade to break the ice, finding a worthier accolade beyond being named "the quietest student" in her grade--all is wrapped up in a bombastic bow for the audience to sheepishly walk in the tortured shoes of Fisher's Kayla Day. Achingly honest, robustly witty and strangely tender, Eighth Grade is indescribably mesmerizing in its confines of adolescent angst and defiance.

Thankfully, the supporting cast definitely makes the grade as they all effectively contribute to Burnham's comically horrifying yet endearing universe of feminine teenage schoolyard wasteland. Hamilton's gently goofy father Mark is a nutty but solid revelation into well-meaning single parenting. Emily Robinson shows natural realness as Kayla's high school mentor as they both navigate through the social pain and politics of the tricky high school landscape. Prael's Aiden is hysterically put to use as Kaya's unlikely dreamboat that makes her otherwise cautious heart flutter amid the sketchiness and confusion. Plus major kudos go out to Andrew Wehde's crisp cinematography, Jennifer Lilly's flawless film editing and Anna Meredith's adventurous musical score that nails the essence of the film's impish spirit and naughtiness.

Hopefully, the class won't be dismissed too soon by moviegoers for the disarming and thoroughly inviting Eighth Grade.

Do you feel this content is inappropriate or infringes upon your rights? Click here to report it, or see our DMCA policy.
Bo Burnhameighth gradeElsie Fisherhigh schooloutcastteen girl