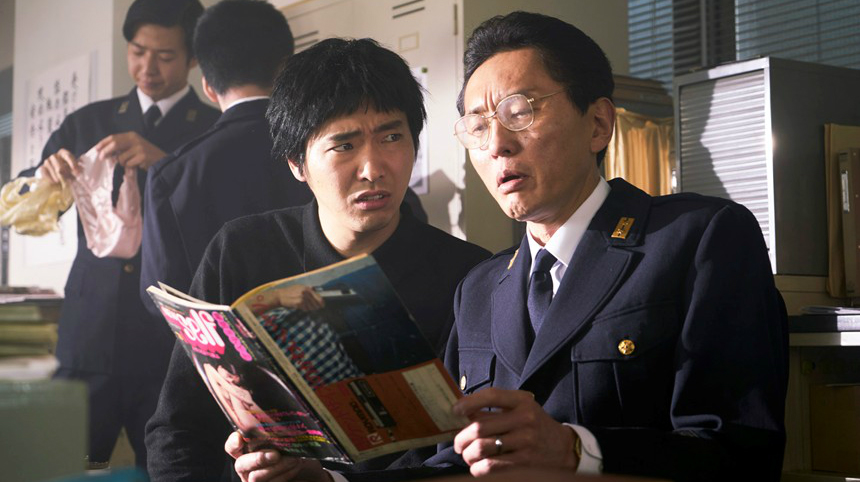 The Japanese films in this year’s edition of the New York Asian Film Festival are typically eclectic and mostly accomplished, ranging from fresh takes on period films (Kakekomi, Sekigahara), dark and often disturbing depictions of high school life (River’s Edge, The Hungry Lion, Liverleaf), to bold takes on genre films (One Cut of the Dead, Inuyashiki, The Blood of Wolves). In this fest dispatch, I consider a few notable selections.

"Art is an explosion." This is the faux-profound and mockingly pretentious mantra repeated in voiceover by Akira Suei (Tasuku Emoto), the subject of NYAFF opener Dynamite Graffiti,(top), Masanori Tominaga's lengthy biopic of Suei, the notorious porn-mag publisher whose publications - with such innocuous titles as Weekend Super, New Self, and Photo Age - were ubiquitous on newsstands during the 70s and 80s.

Dynamite Graffiti is based on, and takes its title from, Suei's own series of autobiographical essays, and the title refers to both the field of graphic design where Suei got his professional start and a traumatic life-defining incident from his childhood. Suei's mother, suffering from tuberculosis and having an extramarital affair, committed suicide with her lover by blowing themselves up with dynamite from the local mine.

The film suggests that this affected his treatment of women as an adult, where the magazine models were basically disposable product, and his wife and mistresses were more nuisances to be tolerated than loved ones to be cherished. One can also draw connections between the factory work Suei labored at before finding his true calling, and the similarity assembly line-type process of the labor performed by women at his magazines, whether being photographed or working the connected phone sex line.

Many issues like this are brought up, but the exceedingly glib, shallow approach Tominaga adopts does his film few favors. Also, its excessive length of nearly 2-1/2 hours dilutes its impact, as Suei becomes a progressively less compelling character as the film wears on, and as it grows ever more dully repetitive. Ultimately, the epic length does little more than expose the not-so-epic qualities of its subject, who wears out his welcome well before the film ends. 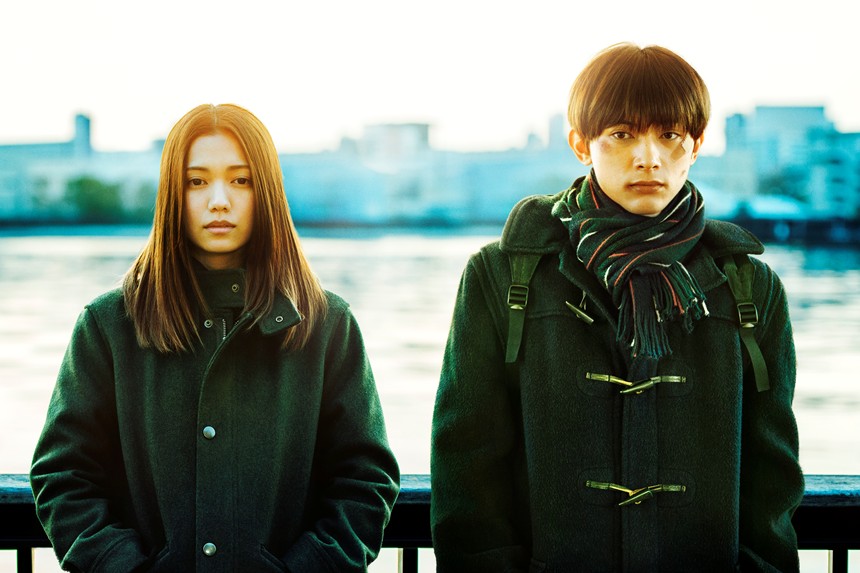 Isao Yukisada's River's Edge, adapted from Kyoko Okazaki manga series (originally published in 1993 and 1994), is his beyond bleak vision of teen angst, set in and around a suburban Tokyo high school in 1994. Though not mentioned in the film, its somber, mordant atmosphere anticipates the following year’s twin disasters of the Kobe earthquake and the Tokyo subway sarin gas attack.

Although the film follows several characters, two figures emerge as more or less central: Haruna (Fumi Nikaido), and her friend Ichiro (Ryo Yoshizawa), who's gay and closeted, which doesn't prevent him from being regularly beaten and otherwise humiliated by his classmates, most notably Haruna’s boyfriend Kannonzaki (Shuhei Uesugi).

In the apparent absence of any authorities of influence such as parents and teachers, these young people seem to be mostly left to their own devices, to befriend, betray, hurt, humiliate, and use each other at will, as well as suffer their private demons. The high-schoolers emerge as morally complicated characters, to say the very least. Even though Haruna's boyfriend brutally bullies her friend Ichiro, she doesn't break up with him over this. Also, Haruna's friend Rumi (Shiori Doi) and Kannonzaki frequently hook up behind Haruna's back for sessions of kinky sex, which is very graphically shown in the film. Despite being so frequently victimized, even Ichiro isn't above hurting others as well. He has a girlfriend, Kanna (Aoi Morikawa), whom he uses as a beard to further maintain his closeted status, and whom he treats with casual neglect and cruelty.

Yukisada's earlier film Parade explored a similarly dark panorama of youthful characters, so this is not new territory for this filmmaker. However, in River's Edge, he considerably ups the pessimistic ante by framing the action in tight, claustrophobic Academy ratio (perhaps to mimic manga panels), trapping his hapless characters further into dark isolation. A searching, relentless offscreen interviewer (played by Yukisada himself) bombards the characters with personal questions about their lives and feelings, turning them into human butterflies pinned to psychic walls, with no hope of relief or escape. 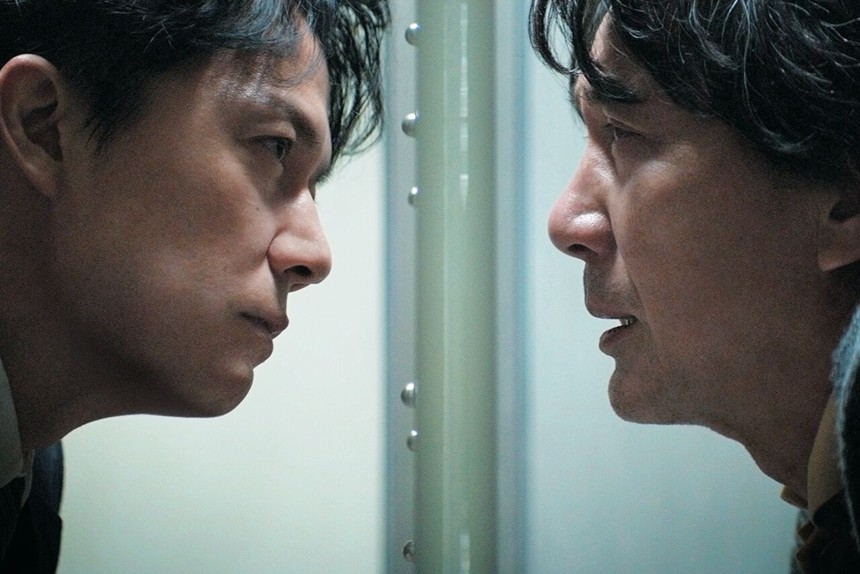 Law and Order meets Rashomon in Hirokazu Kore-eda’s courtroom murder mystery The Third Murder, which at first blush seems like a radical change of pace from his celebrated, exquisitely rendered family dramas (e.g. Nobody Knows, Still Walking, Our Little Sister), but much like the murder at the narrative’s center, delving a little deeper reveals that initial appearances are quite deceptive.

Ultimately, the genre trappings Kore-eda adopts here prove to be a thin veneer for themes that connect this film strongly to his others, especially in terms of its subtle and profound revelations of character. This serves to make his take on the legal thriller satisfyingly engrossing, even as it denies the viewer the conventional sorts of narrative closure that more ordinary examples of this genre would demand.

The opening seems to leave no doubt as to who committed murder. It plainly shows Misumi (Koji Yakusho), a middle-aged factory worker, bashing his boss to death, robbing him of his wallet, and then torching the body. Misumi’s subsequent confession, along with the fact that he recently completed a 30-year sentence for killing two other people, makes him an almost certain candidate for the death penalty, according to the tenets of Japan’s legal system.

Into this case enters defense lawyer Shigemori (Masaharu Fukuyama), who reluctantly takes over the case from an older colleague. Since there’s apparently no doubt of Misumi’s guilt, Shigemori’s mission is to reduce Misumi’s sentence from the death penalty to life in prison. At first, questions of truth or justice are less important to Shigemori than winning; his approach to defending his client is to treat it all as a rather cynical game of legal chess, where the goal is to defeat his opposition in the courtroom.

However, as Shigemori is drawn further in the case through his encounters with Misumi and others involved in the case, including the murdered man’s widow and daughter, his tactics of cold calculation melt away as the details of the crime become progressively less clear-cut. Misumi’s story of the murder, and his reasons for committing it, changes with each retelling, to the point where whether he even did it at all (notwithstanding what we saw at the beginning) is up for debate.

Kore-eda elevates his version of the legal thriller far above the rote story mechanics that this genre can be prone to fall into, with strong performances (especially by the protean Yakusho), coldly beautiful wintry cinematography, and an intriguingly unsettling inquiry into the nature of truth, and whether it is even possible to determine such a thing in the midst of human deception (of self and others) and conflicting personal agendas. 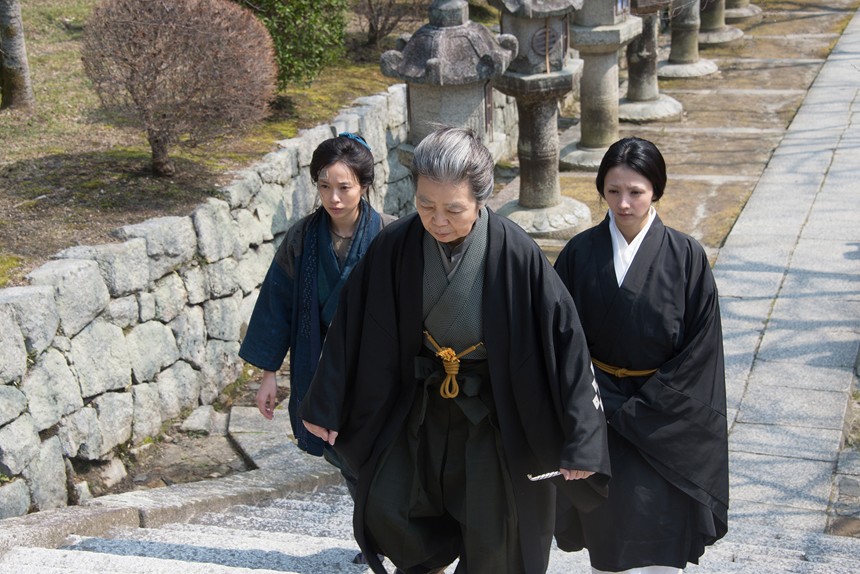 This year’s festival featured a welcome focus on the films of Masato Harada (Bounce Ko Gals, Kamikaze Taxi, Climber’s High, The Emperor in August), a remarkably versatile director who’s been making films since the early ‘80s, and early in his career had none other than Howard Hawks as a mentor. He isn’t as well-known or has been given the international accolades as some of his contemporaries, which is unfortunate, since he’s made films that are just as accomplished. Just like Hawks, his eclecticism in terms of film genres and his sharp attention to memorable characters and insights into human behavior are precisely demonstrated in many of his works.

Up until recently, Harada has largely dealt with contemporary subjects, but now he has made a belated foray into jidaigeki (period films usually set during the Edo era of the 16th through mid-18th centuries), preserving his naturalistic style and fine work with ensemble casts. Besides his most recent film Sekigahara (about the titular bloody battle of 1600), also screened at the festival is Harada’s 2015 film Kakekomi, his first period film, based on a novel by Hisashi Inoue, about a temple that sheltered women (the title translates as “runaway women”) from abusive husbands during the Edo period.

Harada’s adaptation focuses on three women who seek shelter in the Tokeji mountain temple, who wish to escape their husbands for varied reasons, ranging from abuse and neglect to apparent boredom. The film takes place during the latter decades of the Edo era, which were quite conservative in terms of suppression of the arts such as literature and painting, and which were especially oppressive to women.

Women were essentially considered their husbands’ property and could not get divorced on their own. Temples such as the one depicted here were sanctuaries where men were not allowed, and who facilitated the process for women to obtain divorce papers. However, there was a price of extensive questioning and two years of required service in the monastery.

Harada adopts a very different tone than many period films, which often deal with noble figures and samurai in tales or war, tragedy, and grand romance. Kakekomi, in sharp contrast, is much more down-to-earth, and often adopts a much more wry, comic tone. There is also a strongly feminist empathy for the plight of women in this period, a much rarer focus for films of this kind. With this film, Harada adds yet another entry to his impressive resume of quietly powerful works.

Do you feel this content is inappropriate or infringes upon your rights? Click here to report it, or see our DMCA policy.
Dynamite GraffitiHirokazu Kore-edaIsao YukisadaKakekomiMasanori TominagaMasato HaradaNew York Asian Film FestivalNYAFFNYAFF 2018River's EdgeThe Third Murder