Summer in New York City means Japan Society presenting another round of delish contemporary Japanese films, ranging from the weird and macabre, to the sincere and bubblegum apeshit insane! It's all happening, starting today, July 19, and roaring until July 29.

Dustin Chang and Christopher Bourne have the lowdown on some of this year's slick selections from vanguard elders and punky upstarts. Take in the gallery below for their takes on what to expect  fest-side, and on just what to put on your watchlist next. For more info on the 2018 Japan Cuts program, just click here.


Dustin Chang and Christopher Bourne contributed to this story. 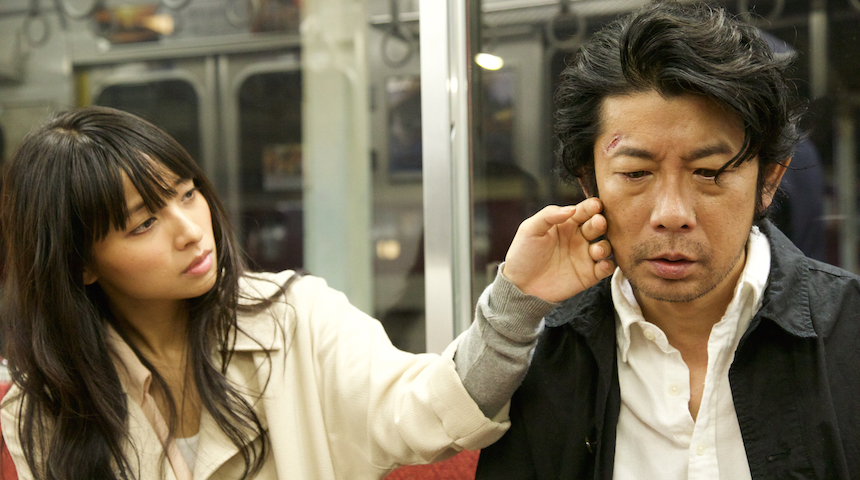 Naomi Kawase's intensely sensualist, deeply personal, visually transporting, and unabashedly philosophical filmmaking gets some meta-cinematic wrinkles in Radiance, her inquiry into the nature, value and purpose of cinema, and by extension, vision itself.

The two central characters are Misako (Ayame Misaki), a writer of film commentaries for blind and visually impaired audiences, and Nakamori (Masatoshi Nagase), a photographer who's rapidly losing his eyesight. Misako is working with a focus group consisting of blind and visually impaired people, who are commenting on her latest transcript for a film that will soon be publicly screened. The focus group's critiques revolve around striking a balance between being accurately descriptive of the images and allowing space for audiences to exercise their imaginations.

Nakamori is the most harshly critical, even going so far as to question Misako's competence. Misako, stung by this extreme bluntness, ripostes that the real problem is that Nakamori lacks imagination. Despite this rocky start, relations between them soon begin to thaw, and they assist each other with their personal problems: Misako's struggles with her dementia-stricken mother, and Nakamori anger and fear at going blind, destroying both his livelihood and his sense of identity.

Appropriately, for a film so occupied with themes concerning images and image-making, Radiance's visuals work overtime to overwhelm us with their all-encompassing beauty and sensuousness. Arata Dodo's cinematography consequently is a major asset, providing us with images as varied as two figures silhouetted against a brilliant sunset, moody nocturnal scenes, and lush verdant landscapes.

The way Kawase connects her imagery to the human drama within reads to some as sentimental or maudlin. But I would interpret this instead as a reflection of her deep devotion to her belief in the capacity of art to explore the porous boundaries between life and death, and its power to heal and encourage appreciation of the beauty around us that's visible if we open our vision wide enough to perceive it. -Christopher Bourne 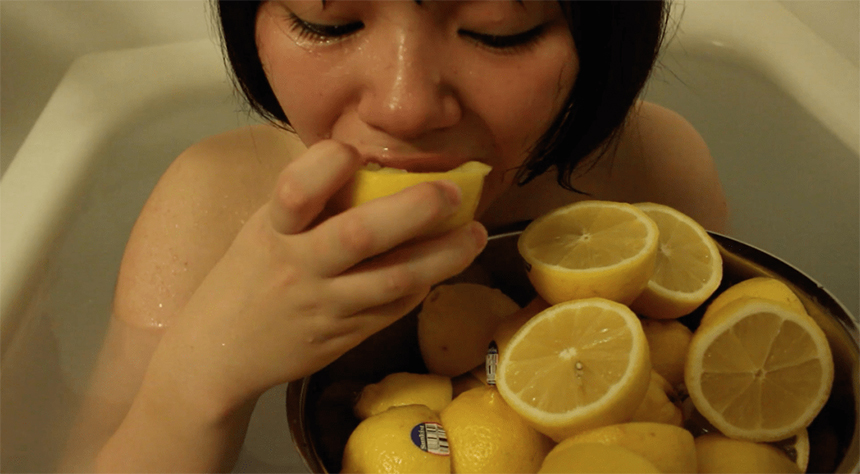 20 year old Yamanaka Yoko's no budget debut Amiko, played drolly by Sunohara Aira, provides a window to the low-fi angst of a high school girl leading a boring suburban existence. Mostly in close-ups, Amiko, our bowl cut haired, Radiohead listening heroine, leads an uneventful life in Nagano. Her ideal fantasy world comes in the form of Aomi (Oshita Hiroro), a nihilistic boy obviously too cool for school. He is in the school soccer club just because. And when things get boring at a practice, he'd fake leg cramps. They bond over their hatred of sports and Radiohead one day. Then it's the waiting game for Amiko. Time passes and nothing happens. She deliberately passes by him in the stores. Nothing. Then she hears that he ran away to Tokyo to live with a former student who was pretty and popular, the kind of shallow girl Amiko thought they both loathed. The life gives you lemons, you better suck them in the bathtub.

So Amiko embarks on a journey to Tokyo, to confront Aomi. There she finds that her ideal world is not what it's cracked up to be. That everyone realizes growing up and facing the reality suck donkeys. Completely devoid of adult presence, you can detect the sweet stench of youth emanating from every frame of Amiko. Peppered with French New Wave spirit - especially the "If you two are truly in love, dance with me!" impromptu dancing scene in the subway, the film packs a rebellious, playful punch. -Dustin Chang 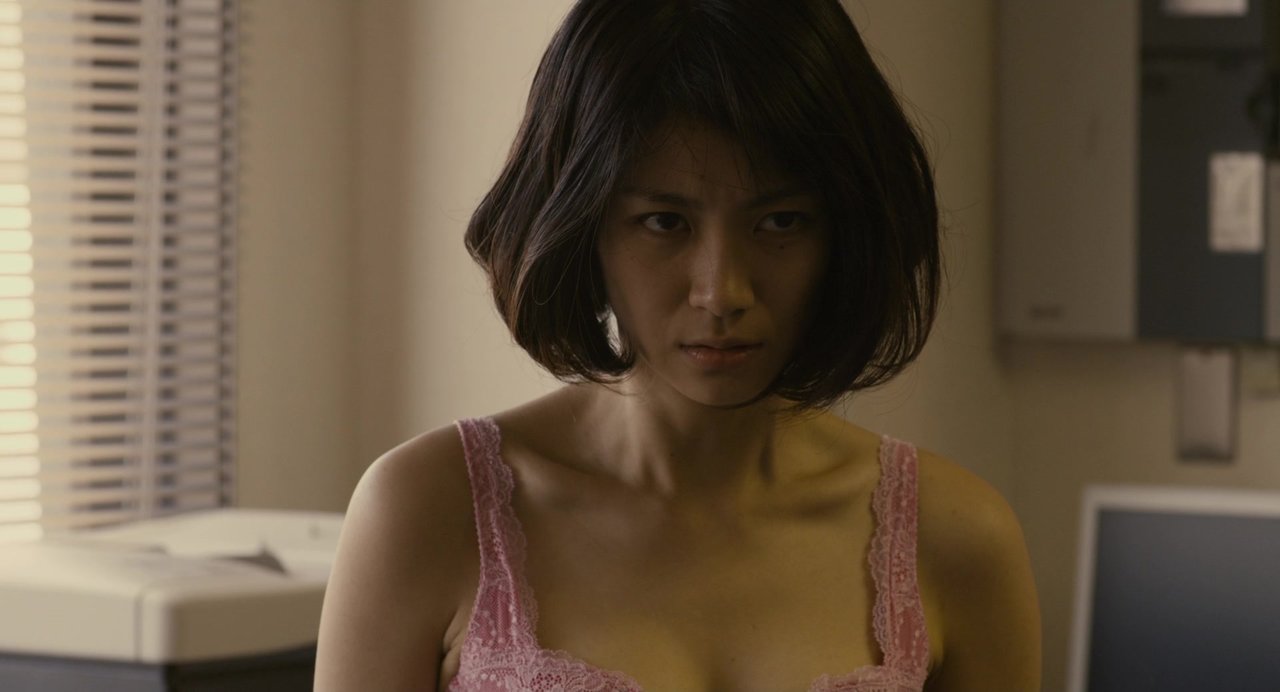 The March 11, 2011 natural and man-made disasters of the earthquake, tsunami and Fukushima nuclear meltdown continues to be a fruitful cinematic subject, and veteran filmmaker - and Fukushima native - Ryuichi Hiroki delivers one of the strongest to date with Side Job, adapted from his own novel.

Side Job follows several characters, but more or less central is Miyuki (impressive newcomer Kumi Takiuchi), who works as a clerk for Iwaki City in Fukushima prefecture. She lives with her father in temporary housing, having lost their home and her mother in the disaster. Her father (Ken Mitsuishi), a rice farmer whose land lies in the forbidden nuclear zone, spends his days mostly in a depressive funk, playing pachinko during the day and drinking at night.

Miyuki's "side job," under the guise of taking English lessons, is in fact working as a sex escort in Tokyo, with an agency that sends her to hotels to meet with clients. Her reasons for doing this job are a little unclear: she seems to have no overwhelming financial burdens or anyone forcing her to do this. Perhaps it's to escape the numbing dreariness of her situation in Fukushima, to adopt an alternate persona to bring some color to her life. However, if this is her purpose, it doesn't seem to be working, as her escort job is turning into yet another constricting trap.

Side Job concludes on an image of graffiti on a wall reading, "We've survived. Don't worry about us." This survival in the face of extreme tragedy and a continuously difficult existence marks all the characters in the film. Although the film doesn't overtly raise a political flag, there is definitely a sense of anger and despair at governmental inadequacy at consisting taking care of citizens' needs. But in Hiroki's often mournful yet subtly hopeful film, people's resiliency and capacity to support one another also shines powerfully through. -CB 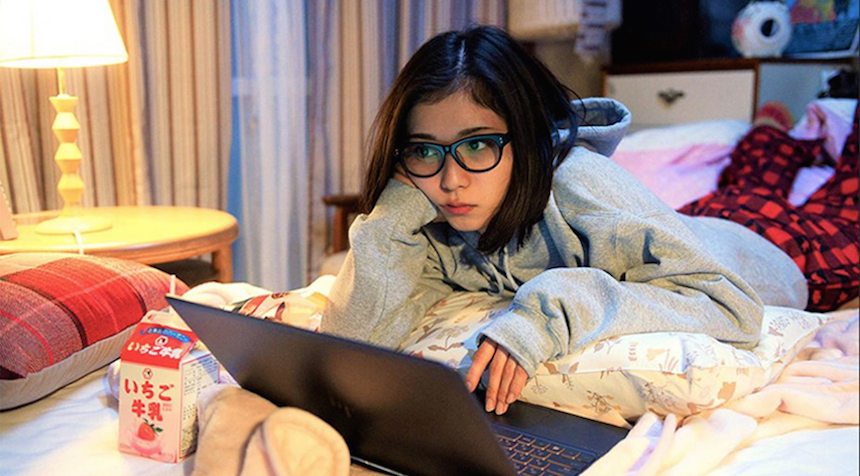 Tremble All You Want

Matsuoka Mayu makes a star making debut playing Yoshika, an introverted twenty-something accountant, in Tremble All You Want. Stuck in her uneventful, lonely life, Yoshika the virgin resorts to a fantasy world where she converses with strangers at a coffeeshop, buses and streets. She is still carrying the torch for Ichi, a princely classmate from Middle school days. But her life takes a turn when Kirishima, a goofy co-worker, confesses his crush on her. In her mind, Ichi will always be number one (ichi) and however nice of a guy Kirishima is, will always remain number two (ni).

Yoshika organizes school reunion under a false name in order to see Ichi again but gets heartbroken when her doesn't remember her name. Going steady with Kirishima seems to be OK at first, that it feels good and natural. But it gets thwarted by her crushing insecurity. Sooner or later, she has to choose between the fantasy and real life.

Tremble All You Want's strength is in its incongruous details - Yoshika's daily rituals, her quirky mannerisms and her eccentric neighbor are all intimately observed. The film rides on the charm of Matsuoka as she breaks out in to a song or does something equally irrational at a moment's notice. A bit overlong for its foregone conclusion, yet with beautifully written characters and and winsome cast, the film is a constantly watchable rom-com. -DC 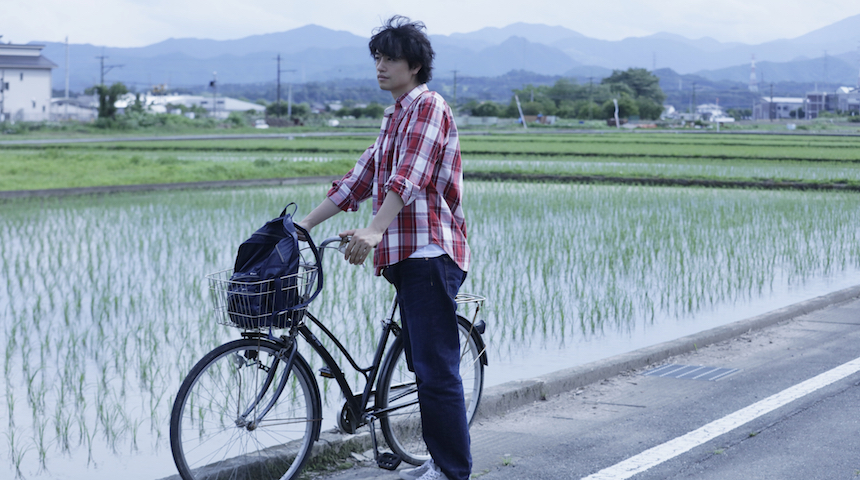 Singaporean filmmaker Eric Khoo's latest feature Ramen Shop, Japan Cuts' opening night film, premiered in the "Culinary Cinema" section of this year’s Berlin Film Festival under the title Ramen Teh, which better represents the spirit of cultural fusion and reconciliation that drives this film. Created to commemorate 50 years of diplomatic relations between Japan and Singapore, Ramen Shop, much like the heartening comfort food it lovingly features, goes down easy, its derivative aspects taking nothing away from its emotionally satisfying effect.

The title Ramen Teh refers to a fusion of two dishes, ramen and bak kut teh (pork rib soup) - signature dishes respectively of Japan and Singapore - eventually created by the film’s protagonist Masato (Takumi Saitoh), whose journey of familial discovery and reconciliation shapes the narrative. At the outset, Masato helps run a ramen shop in Takasaki, Japan with his father, a rather cold and distant man.

After his father’s sudden death, Masato finds a cache of photographs, letters, and a journal belonging to his Singaporean mother, who died when he was a young boy. Longing to learn more about his family history and to find a resolution to long-unanswered questions, Masato returns to Singapore, where he hasn't been since his childhood. With the help of Miki (pop idol Seiko Matsuda), a Japanese food blogger living in Singapore, Masato tracks down his mother's relatives, as well as learning much about Singapore’s rich, varied food culture. Among other things, we learn about the common Chinese origins of ramen and bak kut teh, as cheap and humble comfort food for laborers.

There is much here that will feel familiar, such as historically based family strife (here referencing the trauma of Japan’s WWII-era occupation of Singapore), and the power of food to bring people together and heal old emotional wounds. But the recognizable nature of the ingredients makes this particular cinematic dish no less filling. Unsurprisingly, a particular highlight is the luxuriant presentation of mouthwatering Singaporean cuisine, reflecting the diversity of the country's inhabitants. This will no doubt inspire viewers to immediately seek out the comforts of a hot, satisfying bowl of soup. -CB 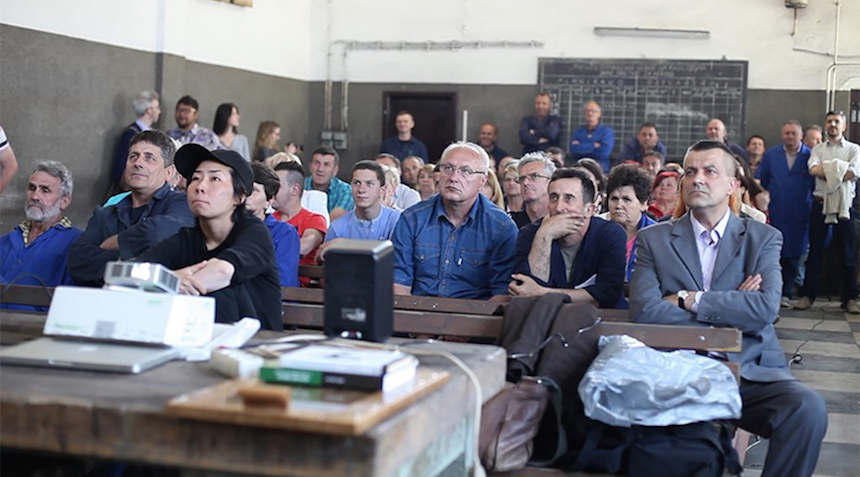 Toward a Common Tenderness

'Searching' is the main theme of Oda Kaori's deeply personal documentary, Toward a Common Tenderness. Oda, a young Japanese filmmaker, forever uncertain, is searching for her identity, both as a person and as a filmmaker. Her debut short Thus a Noise Speaks, she used the camera as a weapon, to confront her family who rejected her coming out as gay. She jumped at a chance to attend film.factory, founded by Bela Tarr, in Sarajevo. There, she was searching for the purpose of filmmaking. She discovers that she likes to film people - her hosts in a small village and Romani family who acted as guides. Their soulful, sad faces spoke volumes more than their limited verbal communication with her. Her project in the coal mines there resulted in the film Aragane.

The film is a compendium of Oda's work so far. It beautifully conveys her loneliness and isolation and longing. This time, Oda uses camera as a direct and intimate communication device. The film is a lyrical, poetic gesture of reaching out from Oda to herself, to her subjects and to the viewers. -DC 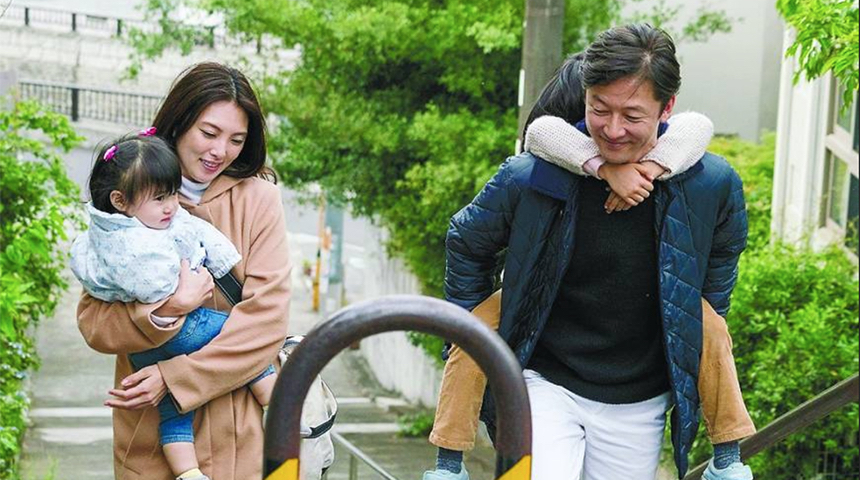 Salaryman Tanaka (Asano Tadanobu) has an adoring daughter from a previous marriage. With the company he's been working for downsizing, lately he is having second thoughts about having another baby with his current wife who also has two girls (Eri and Kaoru) from her previous relationship. Good natured Tanaka is a good dad to all three, trying to do right by everyone. But Kaoru, the older sullen tween daughter with an abandonment issue, rebels against Tanaka, saying deeply hurtful things - that he will abandon Eri and her as soon as he gets a new baby with their mom.

Even though good-natured, the situation pushes Tanaka to a breaking point. He lashes out to his wife and Kaoru. Boy, ain't the mid-life a bitch to wade through? Dear Etranger is as real as it gets. But it's also a downer, just because it's all too real. Asano shows a great range here as a everyday salaryman. - DC

Do you feel this content is inappropriate or infringes upon your rights? Click here to report it, or see our DMCA policy.
japan cuts 2018japan society