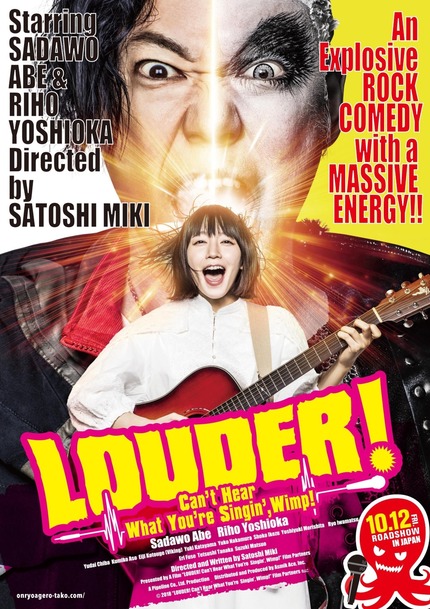 It's been several years since Japanese director Satoshi Miki blessed the world with a new film. Miki's unique sense of humor, ability to write endearing characters, and skewed worldview make him one of our favorite filmmakers, and one from whom new work is always greeted with anticipation. His latest film, the thoroughly-titled Louder! Can't Hear What You're Singin', Wimp! is yet another winner, and a feather in Miki's cap that is sure to please fans of his previous work and those interested in oddball Japanese indie comedy.

Ace screen comedian Abe Sadao (The Apology King, Maiko Haaaaan!) is Sin, a Marilyn Manson-style shock rocker famous for his boisterous live act and devil-may-care attitude. When he comes back after a sizeable break and ruptures his vocal chords during a performance, he runs out of the building and into meek street musician, Fuka (Yoshioka Riho), vomiting blood into her face and collapsing. Fuka brings Sin to the hospital for treatment, and the two musicians bond, with Sin deciding he's going to help Fuka find her voice, both literally and figuratively.

Unfortunately for Sin, who abandoned his career after the spectacular failure onstage, his bosses aren't done with him and the pair go on the run. Bouncing around Fuka's funhouse-like community, populated by sage old hippies and Satanic ice cream shop owners, the unusual team has to save Sin from the hounds on his tail while still figuring out a way to coax a big sound from Fuka's tiny throat. The result is a quirky adventure story that exists somewhere at the intersection of star-crossed platonic lovers and Rocky-esque underdog sports movies, but with more heavy metal and blood vomit.

Satoshi Miki has made a career with these types of meandering, but wholly endearing stories of people finding themselves in their own time. What makes Louder! a bit different is that it combines that natural flow of self-discovery with a man-on-the-run urgency that helps to make it stand out from the pack. More than simply observing, which is Satoshi's usual modus operandi, Louder! thrusts its protagonists into a pressure cooker quickly, resulting in maximum laughs and emotion with minimum down time.

The two leads feel very at ease in Satoshi's universe. Abe's work until now fits in very well with Louder!'s needs, and he presents his character of Sin with a surprising amount of depth and empathy, in spite of his rough exterior. While he's not quite as over the top as he was in The Apology King or Maiko Haaaaan!, two of my favorite Japanese comedies of this century, he's still willing to go the extra mile for a laugh and does so on more than one occasion.

Abe's counterpart, Yoshioka Riho, is a performer who is new to me, and who nails the mild mannered Fuka to a tee. Her performance as Abe's straight man is balanced and nuanced, but never overpowered by the former's obvious onscreen charisma. She's helped out by a wonderful supporting cast who are more than happy to play the foil to her and Abe's bumbling, making this film environs feel lived in and honest, in spite of the outlandish action on screen.

It's been five years since Satoshi Miki graced us with a new film, and Louder! Can't Hear What You're Singin', Wimp! feels like he never missed a step. A filmmaker who is a master of creating his own worlds that are just skewed enough from reality to feel fantastical, Satoshi's kind of madcap joy is just the tonic we need in today's world where reality often feels nightmarish. Fun songs, great chemistry between the leads, exciting visuals, and fanciful adventure make Louder! Can't Hear What You're Singin' Wimp! one of the early contenders for film with the most heart of 2018.