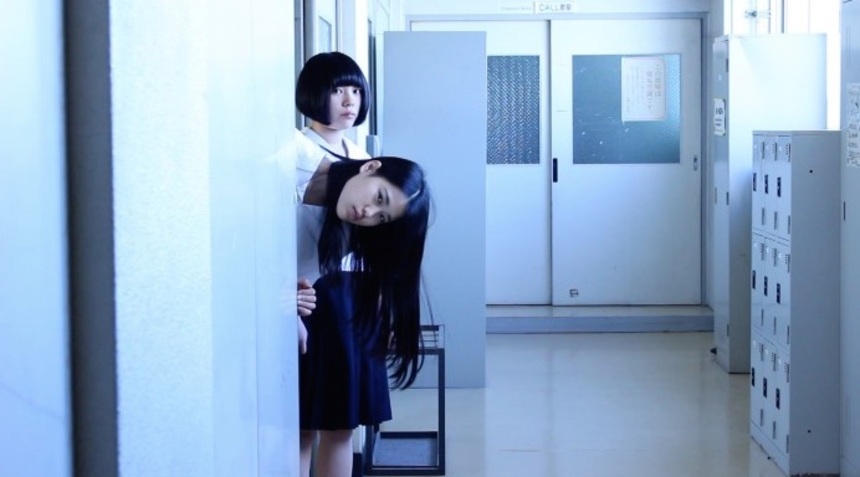 In the recent renaissance of films exploring the lives of teenage girls (Lady Bird, The Edge of Seventeen), Yoko Yamanaka’s feature debut Amiko is a Japanese insight into the mind and turbulent emotions of a young girl, trying to figure out what she feels and why she feels it. Rough-hewn, sombre, yet tinged with a vibe on the verge of insanity, it’s another welcome look at how teenagers try (and usually fail) to figure how to find emotional equilibrium in the midst of raging hormones and short and incomprehensible relationships.

Amiko (Aira Sunohara) lives in Nagano, a town far from the city lights, and even farther from anywhere she wants to be (if she could figure out what that was). She attends a school she describes as a pig farm, a courthouse, and a corporation: though there is little direct evidence to support this, as she is either alone or with friends in the various classrooms, and there is never an adult to be seen. She lives with her mother (another absent adult) and spends time with her best (and possibly only) friend Kanako (Miko Mineo), as she thinks her strange thoughts that she has yet to find a place for.

One afternoon, while alone in a classroom listening to music, fellow student Aomi (Hiroro Oshita) walks in: he is friendly enough, but doesn’t take much time to get to know Amiko, except to see what song she is listening to (‘Lotus Flower’ by Radiohead), and nods his approval. They spend several hours walking, with Aomi doing most of the talking, and this brief encounter leads to an obsession with him by Amiko, the kind only teenage girls can have, where their affection is misplaced, but again, they have no other place (or think they don’t) for these emotions to go.

Indeed, the conspicuous absence of an adults to guide, assist, or admonish Amiko or the other teenagers give us a singular teenage perspective on what is going on. Amiko is thinking the kind of deep, philosophical thoughts that people of her age do (what is happiness if we’re all just going to die? Why does this person like me one day but not the next? Who am I when I am alone?), without enough life experience in which to draw any conclusions that might assist her mental and emotional state.

Yamanaka made this film at age 20, eschewing film school and going straight for on-the-job experience. Hence, this is a raw and rough-hewn film, abandoning more traditional aesthetics for its tone that matches the disjointed nature of its main character’s state of mind. Showing various moments in a year in the life of Amiko, we see her in joy, in love, in pain, in anger, and in despondence at what she sees as a dead-end life, even as she is at the beginning of it.

Amiko is trying to figure out the ‘performance’ of being a human, and the specific human that it seems she is: a girl, a student, a friend, a possible lover. One moment, she is alone and despondent, falling on the floor in her ennui and frustration at those (not) around her. The next, she is sitting with Kanako, playing with yarn, and running around shouting her love for Aomi.Yamanaka captures these moments with the same combination of frenzy and stillness as Amiko’s mood dictates. As her continued separation from Aomi wears at her patience and resilience to the point of her taking drastic measures, Amiko goes beyond the reaches of even reasonable teenager logic, and Yamanaka follows her character without sentimentality or judgment, rather recording it for proverbial posterity.

With the actions of its characters becoming both increasingly dangerous, and all too believable, Amiko is another strange yet poignant look at the complications of youth. Amiko’s youthful heart and too-active brain make for an interest sets of vignettes that are funny and heartbreaking as they are reminiscent.