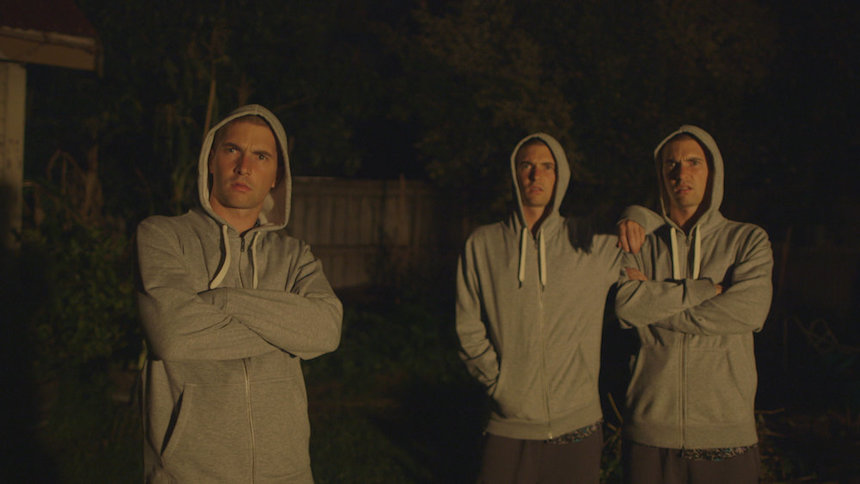 One fine day in his sleepy coastal New Zealand town, after being booted out of living in his mom's garage, petty criminal wannabe (in the local parlance, "Bogan") John, and his dopey pal Gaz, decide to screw over their boss, Shelton, for some stolen money from a rival Asian gang setting up shop across town. In the process, by way of one of those curious Chinese antique shops that exist only in the movies, John comes into possession of a magical bracelet that, he will soon discover (from himself), lets him travel a few moments back in time at the press of a button.

This becomes, well, timely, when their ill advised scam unravels, John is ratted out as being the mastermind (in the local parlance, "Bloody Dynamic"), and Shelton sics the rest of his bogans, along with the local crooked cop, on rubbing him out.

John uses the bracelet not only to make an escape, but to then form his own gang -- all of whose members are, him. Hilariously reckless with his new toy, and before you can read Primer-for-Dummies or recall that 1990s movie with Michael Keaton, he has violated the space-time continuum by hooking up himself with a small band of time-paradox clones of himself to form his own, cue the crash zoom, "Mega Time Squad."

He then sets out to fulfil the dream of getting some of that "Sweet Chinese Money," with the possibly of hooking up with Shelton's bomb-building sister from the big city, whom he spied earlier and took a fancy to after watching her soldering together a suicide vest for her brother. You know, just for shits and giggles.

Wasting not a moment, the movie kicks off into high gear, doling out clever filmmaking gags and plot machinations with the left hand, while the right hand obfuscates just how sophisticated the craft is, by building memorable characters, both major and minor, who are steeped with hysterically specific regional dialogue (think Taika Waititi's loser-goofball dad in Boy, or for that matter, his CGI alien rebel in Thor: Ragnarok). This is the type of 'Swiss-Watch crafted silliness' (patent pending) that one thinks of with Joe Dante, or Edgar Wright -- and yes, Mr. Waititi. Welcome to the party, Tim van Dammen, there aren't many people making comedies with this kind of razor-sharp filmmaking craft and built in repeat watchability!
The sub-subgenre of 'ancient magical curio' in the hands of irresponsible white folks is alive and well, from 1984's Gremlins to 2012's The Brass Teapot, but gets a nutty Kiwi spin with Mega Time Squad. For all of its genre familiarity and adept movie referencing that spring from character (spot the subtle blink and you miss the nod to Revenge of the Nerds or the kinetic set-piece by way of The Thomas Crown Affair - and, no, not the Norman Jewison original) it is the care with which van Dammen and his team construct a scene, joke or a composite gag while still keeping the actors free to create characters that are fun to hang about with. Even if they are not playing nice with one other.

Anton Tennet, who has to act against himself as much as the other actors, has an affable quality to dealing with adversity, and improvising temporary (temporal?) solutions through his own off-kilter worldview that is challenged when his much stronger and more confident would-be girlfriend tells him to 'grow some nuts.' He's a good cunt though, and gets on, in spite of himself.

Like almost any clone story, when you meet yourself and plot with yourself, trouble is not far around the corner, before long you want to kill yourself. Add Shelton marshalling his not-quite-ept forces, and the Chinese Triads en route, it a fun time at the movies to see John grow those nuts, drink a few over-sized pints with himself, and maybe, just maybe, take his life back to the future.