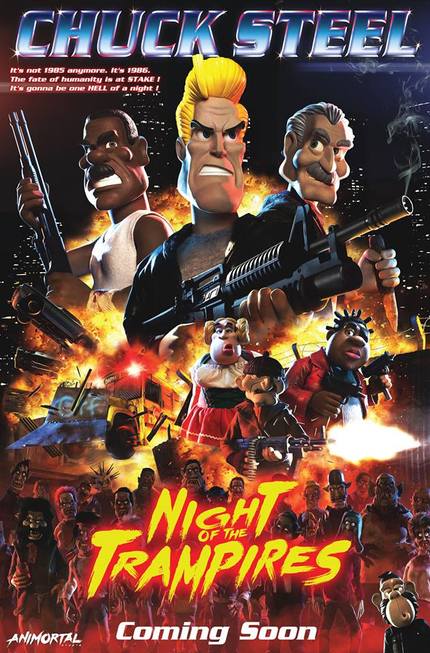 To say that I was wary of a stop-motion animated feature tribute to the glorious excess of Cannon-style '80s action films is an understandment. Chuck Steel: Night of the Trampires could either go very right, or very, very wrong. I'm happy to say that the answer is decidedly the former, with director Mike Mort's loving ode to all things over-the-top about '80s genre cinema delivering some of most crowd pleasing moments I've seen all year.

Expanding on an idea that Mort used to make a short film a few years ago, Chuck Steel takes its titular hero, a rogue cop who doesn't play by the rules, and thrusts him into an adventure centuries in the making as he and a series of bumbling partners take on the hobo-vampire hybrid known as Trampires. With the help of a Van Helsing-like Brit named Van Rental, his police captain, Jack Schitt, and a seemingly unending supply of bullets and explosions, Steel takes on the Trampire threat in an effort to save the world from an ancient curse.

The plot of Chuck Steel: Night of the Trampires is really a secondary concern, this film's raison d'être is to please the crowd with a seemingly unending series of ridiculous action sequences and call backs to your favorite action films and characters of the '80s. For the most part it is very successful. Chuck Steel calls back to everything from Die Hard, to The Terminator, to Sho Kosugi ninja movies, to Lethal Weapon, to all of your Cannon favorites, and tops it off with a heaping helping of gooey '80s horror tropes.

The films is chock-a-block full of visual references and gags that will have you in splits. Exploding bodies, an ominously labeled tanker truck during a tunnel bound car chase warns that it is "Fucking Flammable", and even characters that will immediately bring to mind their obvious influences make Chuck Steel a smorgasbord of fun for the eagle-eyed.

After a little over a dozen films at this year's Fantasia, none has gotten the crowd response that Chuck Steel did, and it's easy to see why. For all of those people who complain about fan service being the enemy of creativity - and I am one of them - this film understands that there is a time and a place for everything, and that time and place is Chuck Steel: Night of the Trampires.

One of the aspects of '80s cinema that Chuck Steel absolutely nails, for better or for worse, is that decade's rampant disregard for political correctness. Hell, it wasn't even a thing at the time. The result is a ton of visual gags and dialogue that would have modern audiences cringing if they weren't so busy laughing. Thankfully, these jokes about everything from a cross-dressing mustachioe'd police chief, to stereotypical ninjas, to fat jokes, are made by characters who we understand to be assholes, so it's nearly impossible to take them seriously.

The film is far from perfect, though. While I definitely enjoyed it a lot more than I expected to, the film has a hard time pacing its best gags. It's very heavily front-loaded with gags, with the first half hour bearing the majority of the best moments as Mort introduces the audience to the world of Chuck Steel. After that, it feels as though the writer felt the need to plow through the story beats of a 90 minute film in 50 minutes, leaving little room to spread out the love.

The laughs and cheers became more intermittent during the second half of the film as it switched from full-bore action spoof to a film with more concern for plot than anything else. I get it, I really do. In order to graduate from a short to a feature, Chuck Steel had no choice but to incorporate a much more involved story. It was the right choice, but the pacing is off, and that was a bit of a drag. That being said, I had a great time with it and was nearly hoarse from laughing along with the crowd.

Technically, the film is executed exceptionall well. I expected a low-budget mess, but Chuck Steel really shows some serious animation chops. If I didn't know any better, Id' have thought that Aardman had lost their minds when the action starts, but Mike Mort's fledgling Animortal company, created to produce this feature, put nearly four years of their lives in to the final product and it is a thing of beauty. The film's ability to combine seamless animation with surprisingly faithful renditions of your favorite '80s visual tropes (rack focus, insane explosions), a superbly vintage soundtrack of cock rock favorites, and original sexy guitar stings is impressive and defintely helps make the experience.

Chuck Steel: Night of the Trampires understands its audience well, and wears its own love of genre proudly on its sleeve. Is it a one-note film? Yeah, mostly. However, the cross-pollination of '80s horror like the Fright Night/Van Helsing inspired British monster hunter and the gooey Night of the Creeps/From Beyond-like body horror during the film's insane conclusion make for a heady mix that will have genre fans vibrating in their seats.

Chuck Steel: Night of the Trampires

Do you feel this content is inappropriate or infringes upon your rights? Click here to report it, or see our DMCA policy.
Mike MortJennifer SaundersPaul WhitehouseDan RussellAnimationActionComedyHorror

More about Chuck Steel: Night of the Trampires