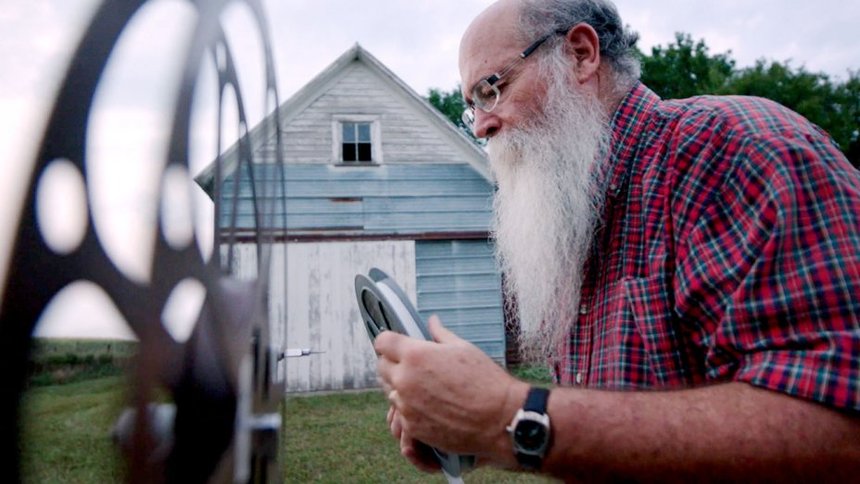 “I like to save things, especially if it looks as if they’re too far gone,” says Michael Zars at the beginning of this documentary, and it’s soon apparent how true that statement is. Dogs, cats, plants, church steeples and ancient farming equipment all fall under Michael’s protection.

And it’s not just the currently living and tangible that he cares for either; mowing the lawns of cemeteries and eulogising at funerals, Michael takes pride in preserving memories, conjuring up the names of the deceased. With the Brinton collection, a treasure trove of silent film reels and other turn-of-the-century memorabilia, Michael has saved a slice of film history long thought lost, and in doing so helped spirit up the memory of one of the pioneers of early cinema for the delight of future generations.

Saving Brinton follows Michael from the idyllic pastures of rural Iowa, all fright trains and fields of cattle, on a journey with a film collection he’s kept for 34-years in his shed. The collection was saved from boxes that came into Michael’s possession labelled ‘Brinton Crap’ (Michael spells out the offensive word here, our genial host of course doesn’t curse).

The Brinton in question was a showman who travelled the country, displaying some of the very earliest films from the dawn of cinema. When Brinton died his work went into storage, changing hands until Michael’s arrival. Saving the collection from destruction he discovered that amongst the projectors, lamps and Parisian film programmes within Brinton’s boxes lay some of the earliest known examples of films by the great magician of cinema, George Melies.

Now, having finally caught the interest of academics from the University of Iowa, Michael embarks on a journey that will see him travel from his home state to the Closing Gala of Il Cinema Ritrovato Festival in Bologna, Italy.

Tommy Haines and Andrew Sherburne’s film is as much a document of a man as it is of the Brinton film collection. With his large bushy beard and colourful ‘American Gothic’ painted tie, Michael Zars comes off as a wonderful eccentric, whip-smart and engaging on any subject he cares to orate about.

The directors are quite happy to point the camera and let him talk, and as Michael himself explains to a group of enthralled young elementary school students, he likes to teach people when they think they’re getting away with not learning anything at all. That’s exactly how this film plays out as lessons on the history of early cinema, Iowa and all manner of subjects slip by as we’re lulled by Michael’s enthusiastic presence, while the expert opinions offered by film historians, scholars and preservationists help further articulate the importance of the discovery.

When the Melies’ films rescued from Michael’s collection, The Wonderful Rose-tree and The Triple-headed lady, are cleaned up and presented afresh to audiences this film captures the absolute joy these films can still elicit. Not just content with preserving film but also having a passion for presenting it to audiences, Michael has done a great service to film preservation that is a joy to see finally recognised. Cinema fans can only hope that there’s more Michael Zah’s out there with thier own collections waiting to be discovered.

Do you feel this content is inappropriate or infringes upon your rights? Click here to report it, or see our DMCA policy.
Andrew SherburnedocumentaryMichael ZahsSerge BrombergTommy Haines