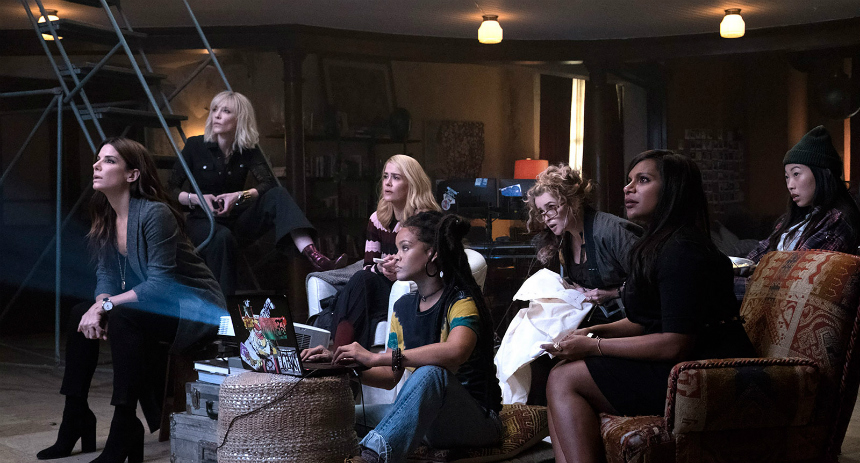 Upon its release in December 2001, Steven Soderbergh's Ocean's Eleven felt like a salve upon a troubled nation's open wounds.

Coming on the heels of Soderbergh's dazzling dramatic duo of the previous year (Erin Brockovich and Traffic), his caper flick felt like a lark, a remake for a major Hollywood studio that was happy to indulge his stylistic whims and fancies. The ensemble cast, led by George Clooney and Brad Pitt, looked like they were having a good time, and that infected anyone lucky enough to see the movie in a theater with an appreciative audience.

Soderbergh's casual grace and the charm of the cast carried the sequels, Ocean's Twelve (2004) and Ocean's Thirteen (2007), but the trilogy came to a good-natured conclusion and all was right again with the world, at least inside the friendly confines of multiplexes nationwide.

Arriving more than a decade later, Ocean's 8 features a cast that sounds terrific for a presumably lighthearted adventure. Sandra Bullock stars as the titular Ocean, with Cate Blanchett as her partner in crime, and Anne Hathaway as a hapless celebrity victim. 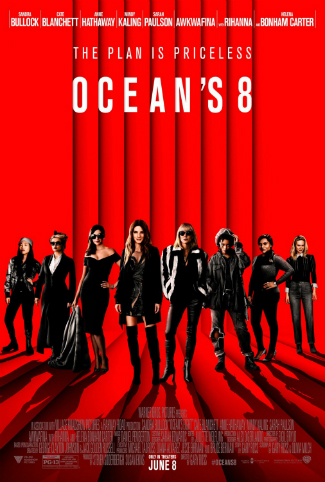 Released from prison after five years, Debbie (Bullock) quickly reunites with Lou (Blanchett) and explains the grand heist she's been dreaming up for her entire time behind bars, involving the theft of a famed and very valuable necklace from a celebrity attending a famed annual gala at the Metropolitan Museum of New York. The two recruit an all-female team of accomplices, overcome easily-solved obstacles, and dress appropriately for each occasion.

I hesitate to point to only one problem here, but Ross is the director, is credited with the story, and cowrote the screenplay with Olivia Milch. So, obviously, he is the culprit.

Mind, I bear no personal animus toward Mr. Ross. I quite enjoyed Big and Dave, two films for which he is credited as writer or cowriter. But his body of work as a director betrays a certain stiffness in the joints. Sometimes, an inflexibility in tone befits the material, as in his directorial debut Pleasantville and the historical sporting drama Seabiscuit.

When it comes to action of any type, a director must be rigid to a certain degree in order to achieve his vision for the project, and we certainly saw that in The Hunger Games, an adventure that sorely lacked for any spark beyond the star personality of Jennifer Lawrence. Similarly, Mr. Ross was unable to bring any life at all to Free State of Jones, a woeful if well-intended historical drama with action.

A similar lifeless condition exists in Ocean's 8, which the cast keeps trying to ignite, despite the lack of any kindling material.

Naturally, much of the early running time is spent recruiting criminal associates, including Mindy Kaling, Sarah Paulson, Awkwafine, Rihanna and Helena Bonham Carter, but the entire process feels rote and routine to the extreme, dry maneuvers that only result in the expected. The idea of an all-female team should be rousing, or at least fresh, yet many lines of dialogue are flat, either in the writing or the delivery, and only a few scenes stir interest or curiosity, to be quickly dampened by the next scene.

The few obligatory men in the cast -- Richard Armitage, James Corden -- wave their arms in the air occasionally but otherwise their eyes betray a similar look as the women: like baby birds yearning to be fed by their absentee father, only to starve due to his inattention.

Ocean's 8 is not a total disaster, at least until late in the third act, when it jumps completely off the rails and takes the caboose home with it. Until then, it's a lethargic, good-hearted attempt at a comic adventure that lacks vim and vigor. The only pleasure comes from the long stretches when no men befoul the experience further with their banal buffoonery.

More than by the way, according to Indiewire's report in 2015, Milch had been working on the screenplay for months when Ross boarded the project. So, yes, I still blame Gary Ross for everything that went wrong. Sorry, dude!

The film opens wide in theaters throughout the U.S. and Canada on Friday, June 8.

Do you feel this content is inappropriate or infringes upon your rights? Click here to report it, or see our DMCA policy.
Ann HathawayCate BlanchettGary RossMindy KalingOlivia MilchSandra BullockSarah Paulson