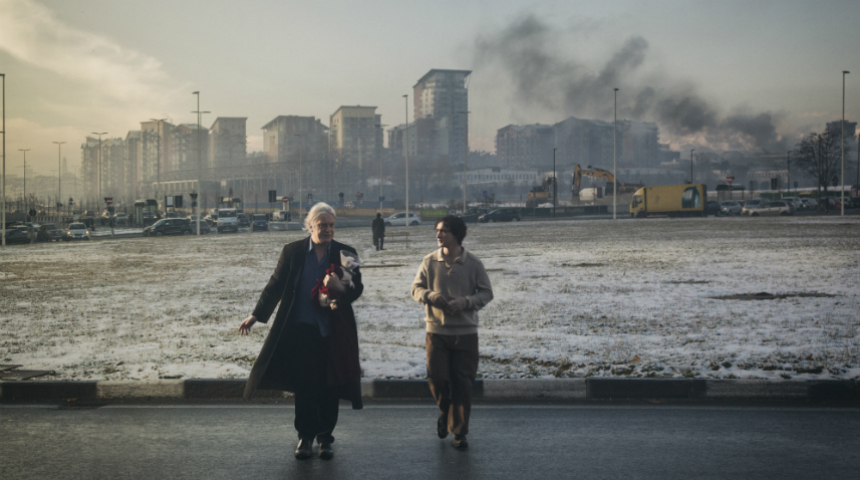 Alice Rohrwacher's third feature film´s title Happy as Lazzaro (Lazzaro felice) sounds like a tongue-in-cheek title, until the eponymous protagonist starts to interact within a tribe of laborers on an isolated hamlet known as Inviolata.

The teenage peasant (newcomer Adriano Tardiolo) embodies a crystal-clear innocence, to the extent people may take him for a simpleton. He always carries out whatever duties whoever imposes on him without disputing, being frequently relegated to carry grandma to bed, one of the several sweet jokes Rohrwacher has prepared.

The two-hour film is distinctly divided into two parts connected by the central character of the selfless altruist Lazzaro. The first installment materializes the routine of dawn-to-dusk labor in a neorealist revision.

Lazzaro and three generations of workers tend to tobacco, living in a feudal-like bubble under the exploitative reign of Marchesa Alfonsina de Luna, the queen of cigarettes. She is well aware of her position in the food chain and does not hesitate to exploit gullible peasants as sharecroppers. (At this point in the film, it is revealed that the story is inspired by true events). As it turns out, they lack general knowledge while retreating to fairly medieval assumptions. They often exclaim "Witchcraft!"  at not so revolutionary technologies.

During the observation of the day-to-day routine of peasants, a plot emerges as Tancredi, Marchesa's spoiled son, begins a friendship with Lazzaro, obviously motivated by Lazzaro's blind servility. The young marquis stages his own kidnapping with Lazzaro functioning as a link between comfortable exile and his mother's house. At this point, elements of a fable contaminate the neorealistic fetus of a coming-of-age adventure, transferring the storyline to modern-day capitalism in the second part of the film.

The gap between the two eras consists of a decade, after which Lazzaro, as his biblical namesake, emerges in a miraculous act of resurrection spared of the destructive effect of aging, unlike his compatriots from Inviolata. The leading character should show the stereotypical signs of the fool archetype (the holy fool), yet it does not, as his unconditional goodness swipes the film into humanism. Happy as Lazzaro feels like an anachronistic effort, an ode to untainted human spirit among injustice, persevering.

Rohrwacher fuses the tradition of neorealism and mystical realism free of any extravagance and overcalculated stylization. The main character's simpleness translates into the directorial approach as moral fabulism veers into social parable. The two planes intersect, a journey of unconditional alliance defying time, and iteration of slavery making little to no distinction between feudalism and democratic capitalism as past and present, historical and storytelling, merge and contaminate themselves.

Even though Happy as Lazzaro might evoke the work of the Taviani brothers, Rohrwacher's idiosyncratic storytelling results in a low-key social drama, dominated by mesmerizing lyricism yet not alienated by introduction of magical or fairy tale elements. The charm of Rohrwacher's latest oeuvre may lie in handling the topic uninvasively and avoiding transferring the burden of being exploited from the protagonist unto the viewer's shoulder, while preserving his innocence in unsentimental fashion.

It might also explain the appeal of the film to a wider audience, since Happy as Lazzaro has  been acquired for distribution in territories such as China, Spain, U.K., Germany, Russia, Australia, North Africa while Netflix acquired right for North and Latin America.

Happy as Lazzaro debuted at the Cannes Film Festival last month and just opened in theaters in Italy.

Do you feel this content is inappropriate or infringes upon your rights? Click here to report it, or see our DMCA policy.
Adriano TardioloAgnese GrazianiAlice RohrwacherItalyLuca Chikovani

More about Happy as Lazzaro