If you view them as mentally ill, you won’t enjoy yourself too much. Not in this day and age. And rightfully so.

I’m referring to the residents, central to Phlippe De Broca’s antiwar farce King of Hearts, of the French asylum that finds its gates open as a result of the chaos of war; in this case, the Great War.

“Let’s go… they’re all crazy!” a panicky German officer barks at his troops, and they beat a hasty retreat from the aforementioned asylum. It’s a moment that on its surface makes no sense at all. If the “crazy” patients were remotely menacing, let alone violent, perhaps it would. Rather, they’re just sitting around playing with cards, talking amiably, goofily introducing themselves as various types of nobility. Hence the film’s title, occasioned when star Alan Bates, the British combatant the Germans have been pursuing, must come up with a nom de guerre.

Once we behold the supposed lunatics in their non-repressed form as joyfully creative, morally innocent, and incessantly childlike (their adoration of the “king” reflects a conception of benign patriarchy in its purest sense—the monarch as father figure), then the enemy’s fear is logical, at least psychologically. The Germans, portrayed as buffoons nonetheless efficient in destruction, represent the corrupted adult “normal” mind. The civilized mind. So do the Scots fighting them for that matter. The regular townsfolk? They’re entirely absent, as if the script is asking us to choose between two forms of madness to relate to. 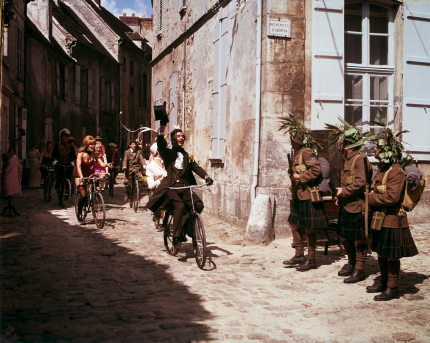 And of course that choice is made for us. The mildly absurdist lunatics are sexually-liberated passivists and nonconformists—that is, they are the 1960’s; and so when they erupt from the asylum gates and take over the town  (which looks like every small French town in every flick where American G.I.’s must liberate a small French town) it is with the full force of that decade erupting into the civilized madness of mid-century Western culture.

Whether the filmmakers were familiar with their fellow countryman Foucault’s Madness and Civilization, which was published just a few years before the King of Hearts’s 1966 release, might be an interesting topic to research, but is kind of beside the point: as a work of art, the film is endlessly fascinating in its own right. Even the “wacky” slapstick bits and too-broad attempts at satire (private Adolf Hitler makes a brief appearance) that date the picture are themselves interesting as they are soooo 1960’s.

Moreover, De Broca was a master of mise-en-scène—he just puts so much into nearly every shot, and yet the action is never overly busy or hard to follow, and the frame itself never feels cluttered to the eye. Happily, this 4K restoration does justice to his vision, with the color and exposure pitched just right—both the blues and the grays are swoon-worthy—and the sound flawless. The result is a transporting experience.

So if you want to re-experience a cult movie that was a personal favorite from decades ago—that was my reason—or simply see what all the fuss is about, and why it was a cult pic to begin with, you could do a lot worse than checking out this new release from Cohen Media Group, which streets today in the U.S. In short, King of Hearts remains a compelling portrait  of madness—not of the “insane,” however, but rather of the sane who run the world… and destroy it.

Do you feel this content is inappropriate or infringes upon your rights? Click here to report it, or see our DMCA policy.
Alan BatesGenevieve BujoldPhillipe De Broca

More about king of hearts