Review: LU OVER THE WALL Mixes Merfolk With Humans, Casting a Fabulous Spell 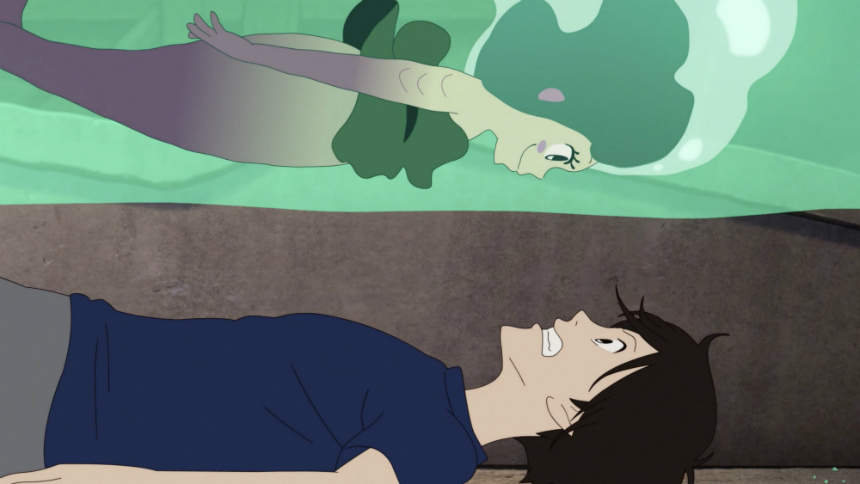 Really, I did not expect a silly animated Japanese fable with Tex Avery feet to make me cry, but sometimes these things happen.

Directed by Yuasa Masaaki, whose estimable credits include Mind Game, Genius Party, and the short Kick-Heart, the film is titled Lu Over the Wall and it is immensely silly, a silky smooth milkshake that's been cut with ice to cool off any hotheads in the audience. To the delight of my cartoon-loving heart, it even references famed animator Tex Avery, featuring wildly swinging, dancing couples with inordinately proportioned giant feet, stomping this way and that with uninhibited joy.

Yet it sneaked past my usual defenses and made a dramatic impact upon my psyche, prompting a steady trail of tears to fall unbidden from my wizened old eyes. I've struggled to identify the emotional culprit responsible, and I believe it circles back to the sheer joy and unconditional love that emanates from Lu (voiced in the English dubbed version by Christine Marie Cabanos).

Lu is a mermaid who surfaces in a small bay of water alongside a small village that abuts a larger city. The village is separated from the city by a steadily-rising mountain, which means that the villagers and their neighbors in the sea have developed a very special relationship over the years which is shrouded in legends, fears and misunderstandings. 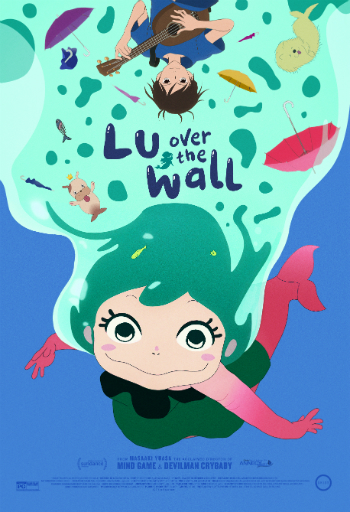 Kai (voiced in English by Michael Sinterniklaas) is a middle schooler who is mired in gloom and sadness. His grandfather is constantly warning about the dangers of the merfolk, who have not been seen for quite a long time. His father is constantly reminding Kai to study hard for his upcoming exams so he can get into a good high school. His mother separated from the family when they were living in Tokyo; her absence is palpable, though rarely spoken about, but it may be a large part of why Kai is experiencing such a difficult period.

Kai has two friends at school, a chipper girl and an upbeat boy, both aspiring musicians who, like Kai, do not enjoy close relationships with their parents. When they discover that Kai has been experimenting with music, they eagerly invite him to join their band, which has been begun practicing on the otherwise abandoned Merfolk Island.

One night, Kai "meets" Lu, and the enchanting creature, who looks like a young girl and could be his little sister, soon displays her uber-friendly superpowers and desire for friendship. Naturally, everything changes after that, as his bandmates, his father, his grandfather, his classmates, and, indeed, the entire village are deeply affected by little, powerful, mysterious and friendly Lu.

Truthfully, and foolishly, I did not realize that Yuasa directed the film until after I had watched it, which further explains why the ticking time bomb of emotion caught me off guard when it exploded. The cumulative effect is startling and rather marvelous; though it plays like a musical comedy, if you can imagine rock music featuring a little girl mermaid singing the tunes.

Lu Over the Wall is a fabulous concoction that, yes, teaches good lessons for children, their parents, and other adults in a tender and surprising manner. I fell hard for the spell it casts, and can't wait to watch it again.

The film opens in theaters across the U.S. on Friday, May 11, and then will expand further in the following weeks via distributor GKids. Visit the official site for theater listings and more information.

Do you feel this content is inappropriate or infringes upon your rights? Click here to report it, or see our DMCA policy.
animationJapanLu Over the WallYuasa Masaaki

More about Lu Over The Wall