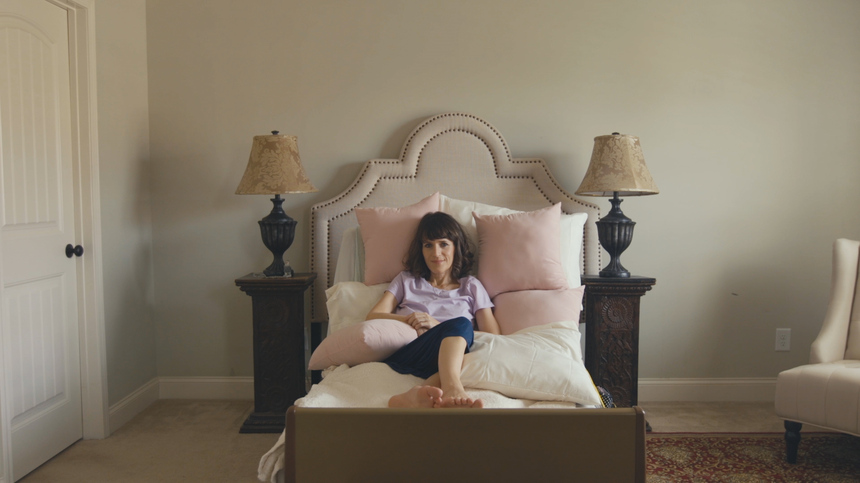 How does one wait for a miracle? Is there even a how, or, like, the faith it presupposes, is it something that must simply be allowed to exist, to be? One can only wait by waiting. Joële Walinga shapes her film to the contours of waiting, to her mother’s – Renée Davies – bold faith in God’s providence while battling cancer, and to her own part in watching and waiting and simply being, alongside her mother.

Although it would presumably make for a natural narrative, God Straightens Legs is uninterested in proselytizing for or against miracles, and less so in arguing about theodicy. It’s a relief that the film eschews a dry approach to these ideas in favour of a more quotidian focus, placing the audience into Renée’s world as she's confined to bed rest, waiting for her leg to heal, both naturally and supernaturally.  In doing so, the film is able to share her faith in simple ways: she reads her Bible, prays and is prayed for by friends, watches preachers on the television. And the film forms itself to her world as well, as the ritual of daily life takes on a religious context; watching the sky through the window, the people on the streets below, day in and day out, is the act of waiting itself.  A bedridden liturgy.

It is a rare intimacy of form and content which matches Walinga’s close relationship with her mother to her directorial instincts and formal approach along with cinematographer Maya Bankovich. The camera creates a sense of space much larger than the room it’s confined to for most of the movie, lingering on a shot to catch the subtle ebb and flow of the light through the blinds, or peering out the window into the lives of neighbours and passing cars. There may be a sense of resignation or boredom but it's not stifling or confining for the viewer: this is Renée’s space, and the film is content to pass its time with her instead of speeding through moments. Yet waiting for a miracle is not a monotonous experience, and, like the film itself, the process must be understood in contrasts, when the weakness of the flesh flashes through the walls of patience and faith – such as the sound of children playing on the street reminding her of the outside world. It is an active waiting, not a crystallization of life.

And as God Straightens Legs takes shape, the more Walinga is able to nestle the film within Renée’s being.  Occasional establishing shots begin to form patterns, and a particular set of images acts as a stand-in for the outside world: rows of townhouses, particularly their roofs, white clouds slowly floating through a bright sky, the streets or sidewalks seen through Renée’s windows. And these images take on a more than literal meaning to Renée’s life as well, their external presence opposed to her interior castle within. It’s striking how the exterior shots are often quiet, nearly silent at times, and yet when it cuts to Renée inside her room, the previously quiet sounds of the external world take on a new and vibrant life, an overflow, as if her mind is sensitive to the potential life she's missing out on. It is not only her physical person that waits patiently in her room, but that very room comes to represent her interior self. And so we’re witness to her mind within these walls: bible verses written down and pinned to her night table, the music she blasts (Diana Ross, Van Morrison), pastor Joseph Prince’s sermons on TV, her phone calls with friends and family – all of these are not only take on meaning as events, but as key elements of Renée’s inner life as she waits on God. Observation is transfigured into contemplation.  It coalesces beautifully in certain scenes, such as when Renée is being prayed for: in the middle of the prayer, as the words “thank You that in this room, Your presence is here,” the film cuts to outside, framing a dazzling sunset within the window of her room – in a paradoxical confirmation of the prayer’s words, pointing outside the room to the presence of God as viewed through the inner window of Renée’s mind; interior and exterior realities colliding. Or in a later scene, Renée has healed enough to take up a wheelchair, and a group of friends visit her. As they’re gathered downstairs, sharing stories and encouragement, rain begins to fall on the windows outside, and as the storm intensifies the voices of the women rise and overlap, building to a cacophonous crescendo: the storm outside mirroring the voices inside crowding Renée’s mind.  Reality is seen not just on the material plane, but an inner, spiritual one as well. In this way, God Straightens Legs does not simply immerse the audience in Renée’s physical space, but mental and spiritual headspace as well.

And yet, while the film’s form allows for this reading, it functions perfectly well without it, as the sharp details and wistful camera are also the marks of a daughter’s concern and the difficulty, not necessarily of waiting on your own miracle, but for another’s:  the primed anxiousness of a loved one. If there is a “dark night of the soul” undercurrent running through the film, a sense of spiritual questioning and doubting, it seems to belong to the daughter than the mother. Walinga uses the film to process her mother’s diagnoses and to help both of them through it. She seems determined to not just wait for a miracle but to create one herself.  Throughout the film, slowly pieced together, are several shots of movers in blue shirts and jeans, delivering a headboard, tufted chairs, and night tables to Renée’s doorstep. During these brief interludes, a recurring song plays – an ambient, ethereal electronic sound that flutters in and out with a jaunty otherworldliness which occasionally that gives the impression of Heavenly elevator music.  Eventually, it is revealed to be all the elements of her dream room, replacing the ascetic emptiness with a warmer, elegant feel. And so Walinga makes it happen, the manifestation of material reality as miraculous. And, in a fascinating formal choice, the sequence when it’s actualized is played out like a dream, a dream interrupted by the presence of others – in the next shot the room is seen back as it was, and we don’t the dream room again in the film.

The film ends on another miracle Walinga provides for her mother: a trip outside to the local pool. The same ethereal song floats into place as she pushes Renée in her wheelchair through the neighbourhood. It results in one of the most joyous moments of the film; as Renée explains why she’s glad to be outside in a deadpan voice about how beautiful it is there, her face serious and intense, the camera lingers until she flashes a quick smile and pulls a few faces. One of the few times we see her be playful. And then the film cuts away to her bed, empty and dishevelled, while the sounds of the children playing by the pool continue in the background, before it all fades to black. Does that final shot, of her enjoying life outside, contrasted with her empty bed, truly constitute a miracle? Has her inner life opened up, and she now feels freer? Does the act of being, suffused by the grace of being alive, enough to sustain faith? As Joseph Prince says in one of the televised sermons that Renée watches earlier, “You believe, you will see. You don’t believe, you will not see.” God Straightens Legs allows the viewer agency in their own religious beliefs, immersing them within Renée’s life for seventy minutes while allowing them to choose whether or not to wait for (or experience) the miracle along with her.

Do you feel this content is inappropriate or infringes upon your rights? Click here to report it, or see our DMCA policy.
DOXA Documentary Film FestivalGod Straightens LegsJoële WalingaMaya Bankovic