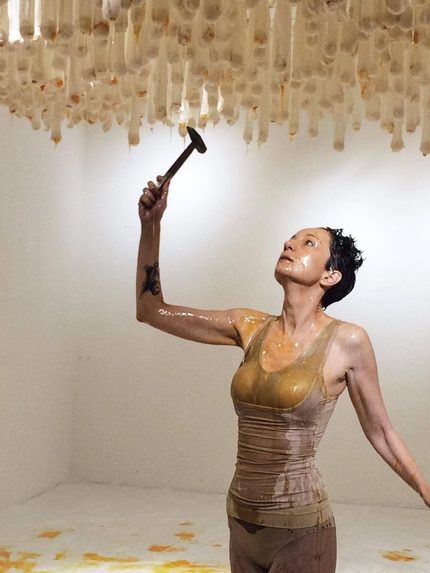 The latest documentary by Los Angeles-born, Miami-based filmmaker Robert Adanto, Born Just Now, starts with a preparation followed by a realization of a piece of performance art.

After stuffing panthyhose-like sleeves with eggs, one egg per pantyhose dangling from a ceiling, creating an odd installation, the Serbian artist Marta Jovanović then proceeds to smash the eggs with a hammer, letting the contents of the eggshells wash over her. The action art remains self-explicatory without the revelation of the title, Motherhood, however, Jovanović relates the act itself as a sort of ritual to her own experience and coming to terms with missing the chance to become a mother.

Jovanović is the person of interest in Born Just Now, a documentary portrait of a Serbian performance artist exploring the topics of intimacy and motherhood in her works. She reveals the most intimate impetuses for her art, such as the end of her eight-year marriage and the abuse she suffered throughout, as well as other questions pertaining to this period of her life. Adanto follows Jovanović as she exhibits and performs her other works The Beauty of Tight Binding, Pillow Talk or the politically charged Ljubav.

Despite Marta Jovanović being the subject of the documentary, Adanto extends the film's portrait frame to contain a wider context and bear deeper meaning. Jovanović takes the pain of her life and moulds it into her artistic output, purging herself of the suffering, and creating meaning for others.

The background in which she is creating, besides her own fate, is also brought into perspective. Coming from the former Yugoslavia, the war-ravaged country has lasting consequences on society. And the artist herself interviewed art scholars, who relate the country's history to the art originating on its turf in a crash course, plunging deeper into performance art made by Serbian artists. That includes the most famous and extreme one, Marina Ambramović, who likewise turned her life into art.

With the accumulating minutes of Born Just Now, its documentary value inflates as the portrayed protagonist serves as a conduit into topics of gender identity, national identity and heritage. The structure of Adanto's latest documentary manages several parallel thematic flows, organically stemming from Jovanović's life and her personal experience, not only as a woman and an artist but as a Serbian. Born Just Now encapsulates a part of the domestic art movement, politically-charged and with international relevancy. And this is the documentary's home ground.

In his previous documentary endeavors, Adanto examined the vibrant Chinese art scene in his feature debut The Rising Tide, mapped Iranian female artists living inside and outside the Islamic Republic in Pearls on the Ocean Floor, looked at New Orleans-based visual artists as the subject of City of Memory set against the backdrop of post-Hurricane Katrina, and explored the so-called "4th wave" of feminist performers in The F Word. Adanto has created a cycle of documentary portraits of countries and art propelled by the socio-political circumstances and events, and leaving their direct imprint on the works of art.

While the preceding investigations were acknowledged as a collective portrait, it might have appeared that Adanto streamlined the concept for Born Just Now, following intensively just one subject. Even though Jovanović possesses all the properties to serve as a symptomatic example of Serbian performance artist, the director's approach to put her art into perspective necessarily calls for other like-minded artists to be included.

The documentary thus introduces those preceding Jovanović, including Ambramović, whilst not omitting the upcoming generation as well. If there is a moment where Jovanović might have regretted not becoming a mother, there is another one where she mentors a young and promising protégé as her spiritual mother. Adanto carefully balances personal moments and facts when piecing the portrait of not only Jovanović, but Serbian performance art as well.

The concept and dramaturgy of Born Just Now thus raises the question whether a viewer knows or does not know who Marta Jovanović is obsolete, since the film expands into several different planes besides her biography without losing its coherency. Timing is in favor of Adanto's endeavors, since Born Just Now remains strictly female-centered throughout the running time and the idea of female artists coming from politically turbulent and war-torn countries being drawn to endurance/performance art is stimulating, especially in the current climate.

Do you feel this content is inappropriate or infringes upon your rights? Click here to report it, or see our DMCA policy.
Born Just NowMarta Jovanovićperformance artRobert AdantoSerbia