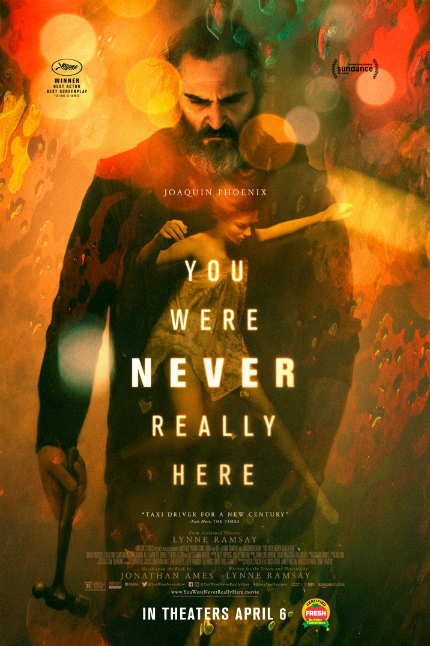 Lynne Ramsay's last two films (Morvern Callar, We Need to Talk About Kevin) have focused on individuals (in these cases, women,) who must contend with being the odd-person-out, someone with a secret they fear so dark and disturbing that it leaves them at odds with and isolated from society. Her latest, You Were Never Really Here, features a man, but one no less isolated, misunderstood, or damaged. With now a second film set in the US and focusing greatly on the violence therein, Ramsay once again proves her deft hand at crafting stories that are at once intimate and deeply disturbing.

Joe (Joaquin Phoenix) is a quiet man, somewhat intimidating in his physical stature, but a man who moves through a crowd with relative invisibility. This serves him in his rather odd line of work: rescuing kidnapped or runaway children and returning them to their families, without involving the police. He's hired for one such job that will prove more challenging than most.

Ramsay has never shied away from examining the most sordid underbelly of society, and those who must carry the burden. In this case, Joe carries a burden that will never be known or barely even appreciated, as he rarely has first-hand contact with those for whom he works. Ramsay lets us into this world immediately but without any formal introduction, in both warning and daring if we want to look further, for most of it will not be pleasant. Rather than take us into the usual political intrigue thriller, Ramsay puts emotional weight on those who carry the burden of fulfilling the violence needs and retribution such crimes demand.

With her keen former cinematographer eye, working with DOP Thomas Townend (who also shot Attack the Block), Ramsay turns the grit up high; a slight graininess to the grading, combined with deep focus, gives us a depth to see through Joe's eyes and experiences as he navigates his carefully controlled yet quickly spiraling existence. Or perhaps the grit is felt more than seen; even when you know the story is going, you are trapped in its spiral with Joe, your mind and heart straining against it, even as you must follow.

Phoenix won the Best Actor Award at the Cannes Film Festival for his performance, and deservedly so. While he often plays introspective characters, he takes it to a new level in offering us a character who introspection is caused by enormous pain and trauma, one that he channels not into any toxic masculinity, but instead one that fights on the good side; he might be exacting some pretty deadly violence, but it's hard not to fault him for his targets.

These moments are juxtaposed in his relationship with his ailing mother, who requires his almost constant care. This is truly one of the most poignant and realistic mother-son relationships I've seen on screen, with the pair at once exacerbated and loving, knowing each other as well as any two people can, that when disaster comes, it breaks your heart for Joe and his ever-increasing emotional pain. His strong-silent type is not out of lack of places where he could therapeutically discuss his trauma, but his personality type has left him unable to communicate except in these small moments with his mother, making the tragedy all the more palpable.

By focusing on the effects of one man's violent actions on his psyche as much as the actions themselves, Ramsay gives us a laser-focused thriller closer to Herman Melville than the usual Hollywood fare, where the character takes centre stage. You Were Never Really Here mines the psychological while presenting violent action as harsh and cruel both for the victim and perpetrator.

Review originally published during the Sundance Film Festival in January 2018. The film opens today in U.S. theaters via Amazon Studios.