The film confirms Chloe Zhao as one of the great new American directors. 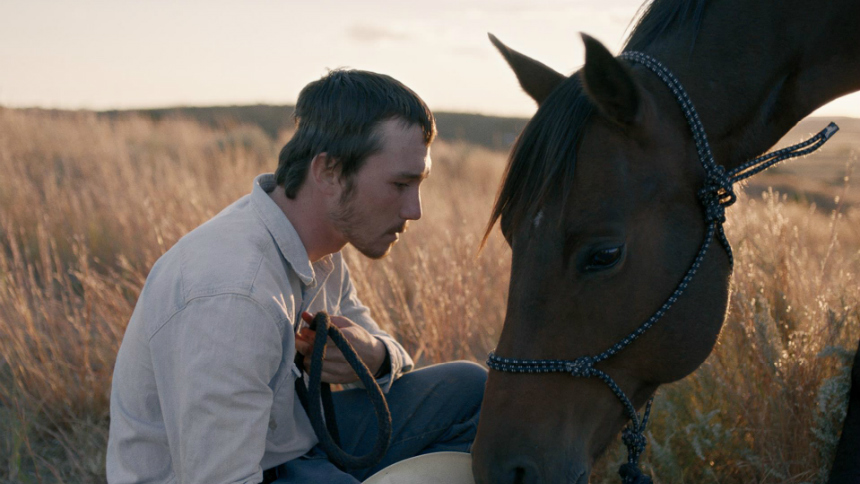 Chloé Zhao's first feature film, Songs My Brothers Taught Me, showed the beautiful and difficult life of a young man on the Pine Ridge Indian Reservation in South Dakota; his relationship with his family, his clashes with white men, and his own decisions about his future. Returning to the same setting, The Rider tells another story of a young man whose dreams are thwarted just as they were about to come true. In this film, Zhao shifts her focus to those dreams, how a young man must reconsider his life, and whether to put his own desires ahead of the needs of his family.

Brady (Brady Jandreau) was a rising star on the rodeo circuit, until an accident and head injury has left him sidelined, possibly without being able to return. He struggles to find some way to continue working with horses, while clashing with his father Tim (Tim Jandeau), who has a gambling problem, and helping look after his developmentally challenged sister, Lilly (Lilly Jandreau). His friends are supportive, but can't really help Brady to decide whether his dream is worth more injury or even death.

As with her previous film, Zhao engages the real people of the story to play themselves in this docu-fiction, crafting the story around their experiences. She finds a way of allowing their natural personalities to come through while still maintaing the story, the emotional through line never wavering. The camera becomes a kind of guardian spirit holding Brady up as he struggles with this newfound disability.

Zhao and cinematographer Joshua James Richards shoot the characters mainly on close-up, their every joy and pain writ large on the screen. Jandreau and the rest of the cast may be non-professional actors, but their honesty in both dialogue and wordless scenes is astonishing; they are both oblivious to the camera and aware of what they need to project. This is juxtaposed against wide shots of the incredible landscape; a place of plains, hills, and most importantly, horses. The connection to the land is absolute.

While this might be a story largely of men and masculinity, the deep love between the male friends is not hidden under bravado; words of love and affection abound, and it is within the love that Brady gives and receives that he must find his answer. He takes a mundane job to earn money because it's what is necessary; he visits his friend Lane, a fellow rodeo rider who was even more severely injured. He tries to find some kind of work with horses, even if it's just training; but even though he is a born horse whisperer, his injury may keep him away from the thing that sustains his soul. HIs may retain the pain of his love of riding his whole life, but the pleasure of it might be taken away, and Brady struggles.

But the view is neither romantic nor sentimental; it is gentle to its characters, letting them breathe through the story and space; meandering as Brady must, trying to find his way. Combined with an understated yet beautiful score by Nathan Halpern, The Rider confirms Zhao as one of the great new American directors, looking at the lives of people too often ignored in cinema, and in a way too often not attempted.

Review originally published during the Cannes Film Festival in May 2017. The film opens today in theaters in select U.S. cities and will expand in the weeks to come. For more information, visit the official site.

Do you feel this content is inappropriate or infringes upon your rights? Click here to report it, or see our DMCA policy.
Brady JandreauLilly JandreauTim JandreauZhao Chloe