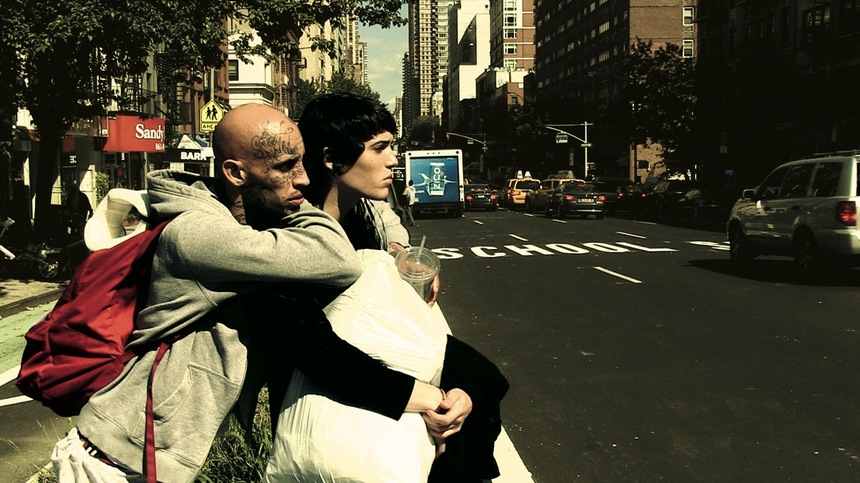 Many a film in recent years has been described as “gritty” or “true to life” but, unless it’s an actual documentary, these kinds of adjectives usually end up being disappointing hyperboles. Fortunately enough, that’s not the case with Cati and Michael Gonzalez’ “Ekaj”, a sweet, raw, slightly-depressing but endlessly fascinating glimpse into the life of someone who’s looking for purpose, for some kind of acceptance and a clear role in society. Yes, it’s all fictional, but it also depends so much on the real experiences of its inexperienced actors, that it sometimes feels more like a documentary. “Ekaj” is the kind of picture that rarely plays in big theatres, but that could —and should— find an audience of its own despite its commercial limitations.

The movie tells the story of the titular Ekaj (played by Jake Mestre), a youth who, along with his friend Mecca (played by conceptual artist Badd Idea) wanders the streets of New York looking for companionship, belonging, and the sort of love —or at least kindness— that he never received at home when he was younger. Through this story —although, being honest, the plot itself is pretty barebones— is that Cati Gonzalez decides to explore many of the problems young members of the LGBTIQ community in America are experiencing nowadays, many of them related to gender identity, drug addiction, mental illness, suicide, and even AIDS.

This is not to say that the movie gives a bad name to these people. Actually, it never feels like it’s judging its characters, instead showing us what their lives consist of: they seem aimless and clueless not because of their lack of aspirations, ambitions or ideas, but because they live in a world that doesn’t seem to know what to do with them. In Ekaj’s case, he was mistreated by his chauvinistic and violent father who simply couldn’t accept the fact that his son wasn’t heterosexual. For a couple of moments, these kinds of revelations may seem a little predictable or even stereotypical, but it all feels so real and honest, one can’t avoid empathising with Ekaj, knowing that these kinds of upbringings do take place in Latino communities in the States. In fact, even though I don’t live in New York or New Jersey, and even though I am an heterosexual male myself, being a Latino film critic, I do relate to much of the context and situations the movie decides to present. Peru —my home country— is, for the most part, a pretty conservative society, in which members of the LGBTIQ community are just starting to be accepted. Gay marriage isn’t legal here —at least not yet—, and we have many political and social groups, as well as entire families, who consider non-heterosexual people (or anyone who dares to be different, really) to be deviants. I’d bet that Ekaj’s story could be translated to Lima —or any other big city in Peru— and sadly, his issues and problems wouldn’t change that much. There’s a lot of work to be done in favour of the LGBTIQ community pretty much everywhere in America. But I digress.

Thematically, “Ekaj” is quite rich, conveying in a very natural way the kinds of questions someone like the protagonist could have in regards to his own identity and purpose. Gender identity is a big issue in the movie, as well as his role in society, which gets reflected in the decisions Ekaj makes throughout the story, many of them taking him on a dark path, full of sadness and regret. I can’t say “Ekaj” is a happy experience —the more you connect with the characters and their seemingly aimless journey, the more it affects you on a deeply emotional level—, but if you do decide to go on it, it will definitely leave with a lot.

The film also has a lot to say about the increase of young people who are contracting HIV nowadays, but prefers to do so in a very subtle way. The characters never explicitly discuss this issue, but one knows that it’s something they’re battling against on a daily basis, despite the fact that it’s not necessarily killing them. It’s a silent and depressingly casual menace, a persistent struggle that makes them feel dependant on pills they can’t always afford and that makes them feel even more distanced from the rest of society. It’s not only that they’re poor —although this is also an issue— but that they don’t have homes, jobs, or any of the other characteristics that constitute a “normal” individual in western society that keep them as outsiders. Additionally, one can’t really complain about the decision of casting non-professional actors for most of the roles in the movie; it gives them a gritty verisimilitude that could never be achieved with actual thespians. The fact that characterisation was adjusted, considering the experiences of these people in real life, definitely helps; one gets the feeling, from time to time, that many of the situations Ekaj gets involved in hit a little too close to home for Jake Mestre. In any case, the end result is quite fascinating; it’s like we’re following actual people struggling on the streets of New York City. Almost, once again, like a documentary.

Visually, Gonzalez also tries to make “Ekaj” as realistic as possible. She prefers long takes, following the action and the movements of her characters, zooming in and out in order to get everything the scene needs. She also favours handheld shots, and mixes different kinds of resolutions —some inserts look grainier or older, as if they were recorded by consumer-grade cameras—, all in service of a very particular and compelling aesthetic. She’s not interested in glamourising or softening the experience of watching these rejected individuals trying to survive on a day-to-day basis —stealing, lying, cheating—; she wants the audience to feel as if they’re actually there on the streets with them, and she certainly succeeds at it.

“Ekaj” is poignant and powerful tale, a true-to-life picture that dares the audience to experience it as personally as possible, conveying difficult —but important— themes through a very natural aesthetic. No, the acting is not “good” in a traditional sense, but in a way, it feels more realistic that anything one could see in a more conventional film, and the characters are developed in such a believable fashion —thanks in part to the actors being very similar to their fictional counterparts— that one can’t avoid being absorbed by the story. “Ekaj” is an unconventional but ultimately satisfying motion picture, a potent indie drama that takes the audience on a melancholy and disconsolate, but also socially relevant, path.

Do you feel this content is inappropriate or infringes upon your rights? Click here to report it, or see our DMCA policy.
Badd IdeaCati GonzalezdocumentarydramaEkajfluidgayhomosexualindieJakeJake MestrelatinoLGBTQMichael Gonzalezrealistic