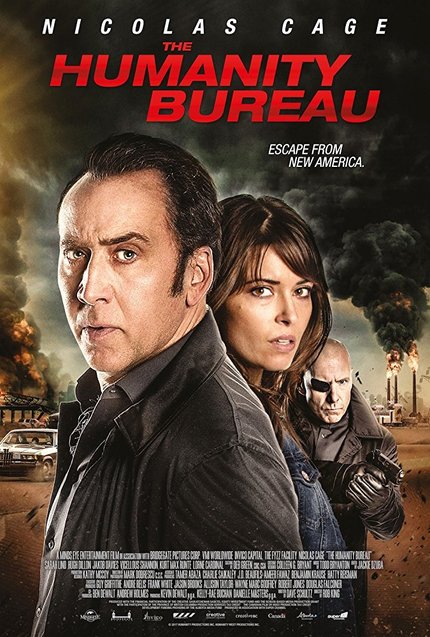 Nicolas Cage's latest thriller, the dystopian actioner The Humanity Bureau, hits theaters and on- demand this Friday, April 6, and to celebrate we've got an exclusive clip for you!

In the clip, Cage tries to make a quick getaway but... well, you'll have to watch to see the result.

The film, directed by Rob W. King, is set in the year 2030 the film sees the world in a permanent state of economic recession and facing serious environmental problems as a result of global warming.

In its attempt to take hold of an economic recession, a government agency called "the Humanity Bureau" exiles members of society deemed unproductive and banishes them to a colony known as New Eden.

The Humanity Bureau is the second title in a six-picture slate deal between Minds Eye Entertainment, Vmi Worldwide and Bridgegate Pictures following Wesley Snipes's The Recall, which was recently released.

Shot in Canada, The Humanity Bureau used the new Barco Escape multi-screen, panoramic movie format, which is supposed to offer the ultimate immersive cinematic experience that uses three screens to fully surround the viewer. Portions of the films were also be shot in Virtual Reality.

Check out the exclusive clip below.

Do you feel this content is inappropriate or infringes upon your rights? Click here to report it, or see our DMCA policy.
Nicholas CageRob W Kingsci-fiThe Humanity Bureau

More about The Humanity Bureau