- Roxy Music, “In Every Dream Home A Heartache”

Wearing a trademark mask that recalls a blow-up sex doll, performance artist Narcissister has made a career out of provocation. Her uncompromising explorations of gender, racial identity, and sexuality celebrate yet subvert pop culture in humorous ways that prove surprisingly accessible to audiences. She is probably the only performer working today that both appeared at The Kitchen and America’s Got Talent.

Much of her work focuses on fetishism. I mean that both in the Marxian sense of 'commodity fetishism' and, more importantly, in the commodification of fetish. But, perhaps, her work is best experienced rather than analyzed. Though you may not be able to check out a live performance of her work outside of New York or LA, she has just released a self-directed autobiographical doc about her life and work. Narcissister Organ Player explores the artist’s relationship with her mother and how a complex family history defined her creative practice.

Narcissister Organ Player premiered at Sundance in January and is now heading to SXSW.

I recently had a chance to ask her some questions about her new film. 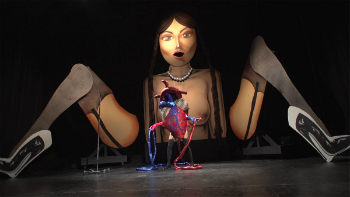 For those who haven’t seen your film, describe it briefly in your own words.

The film is a personal exploration of how my family life impacted me and compelled me to create the ‘Narcissister’ performance character as well as do the work I do as that character.

What do you hope audiences take away from seeing your film?

My intention is that the film will trigger in people a process of self-inquiry. As making the film was for me, ideally the viewing experience will be a fertile jump-off point for personal investigations of one’s own family history and home life; their relationships with their parents and siblings, their memories of tastes, smells, feelings, specific moments…

Your background is in dance and performance art. What motivated you to cross over into filmmaking? How did the medium allow you to express yourself in a different way than other media?

Making short films based on my performance works was part of the Narcissister project from the beginning. I wanted more people to experience my work than those that happened to be at any given live performance. With the videos, I could elaborate on the performances, add additional context, show more details in my gestures and costuming.

When I felt ready to outwardly express all that I had internally processed about my mother’s illness and death, I knew the expanded medium of film would be the best container. And, at feature length, I could tell the story about my creative work as well as my complex family experience.

Many autobiographical documentaries project the subject’s ideal self to an audience. They are puff pieces. On the other hand, your film is a deeply personal work that doesn’t hesitate to describe the most intimate aspects of your biography. What were the challenges of this approach? What was the hardest thing for you to share?

I didn’t plan to do the voiceover myself initially. The interviews that were ultimately used in the film were merely intended to gather content for the story. Another person like a voice actor would read it.

After trying a few approaches, it became clear that I had to be the one to tell it. The original audio takes had all the raw emotion that the film needed. Our draft screenings were terrifying for me. I was so anxious that I had to “watch” literally from outside the room, pacing to and fro.

It felt like an unmasking. I was afraid I would be judged for the life I had experienced, for having the family I had/have, for making the choices I have made and that I would have to face full-on my own judgments of myself, my family, and so on.

Without getting too bogged down in terminology, do you consider your work to be part of a larger activist movement, be it “fourth wave” or “sex positive” feminism? To my untrained eye, I see commonalities between your work, Pussy Riot, or Femen in the sense that the body is used as a tactic to provoke a discussion about gender. Or, is your work more of a personal trip?

On a personal level, I definitely see/feel the activism in my work. I do not aim overtly to position my work in these known activist movements. If my work lands there organically and is helpful to these causes, contributes positively to the discourse, I am obviously thrilled and honored to be of service, to be part of the solution.

You collaborated with animator Martha Colburn on the animated sequences of the film. Could you explain how this collaboration came to be?

Martha got a Creative Capital Award the same year I did. I had known of her work and admired it. Amazingly, at the Creative Capital retreat, after my basic presentation of what I intended to create with my film, she approached me and offered to contribute animations to the project! It was such a gift - not only to see that the organ performances could be so wonderfully animated but also that she would be the one to do it! I am incredibly grateful.

If you could make your next film without any restrictions in terms of its budget or content, describe what you would direct.

I don’t have any plans currently to make another film. An idea has not taken seed in me yet. I had a specific idea for this film and, as I said above, the personal situations of my life compelled me to create it. I needed to tell my family story/my parents’ story before I forgot it. I needed to tell this story as a way of continuing to process and grieve my mother’s death.

And I think I needed to keep the collaboration going with her. That is what I see this film as being – yet another of my wonderful collaborations with her. What is next? I am not sure. For now, I am happy to return to my life simply as a solo-performing artist.

One theme I gleaned from watching your film was that the physical extremes to which you subject yourself in your performances are a form of empowerment. It’s an expression of strength to see how far you can go. Do you think this impulse ties back to earlier forms of civilization with its “rites of passage”? That is, one undergoes a physical (and mental) trial as an act of transformation. Is your performance work a form of ritual?

I love this idea. I would hope so. This idea of “rites of passage” definitely resonates with me. For me, the physical extremes of my work are very empowering and represent a fresh portrayal of femininity. I am grateful to have the strength and the will to do it. I am grateful for the body and the life my ancestors gave me. I feel my privilege. It’s all a huge gift.