Review: Step Inside The DEMON HOUSE

An effective chiller that proves real life can be ten times more scary than any horror movie. 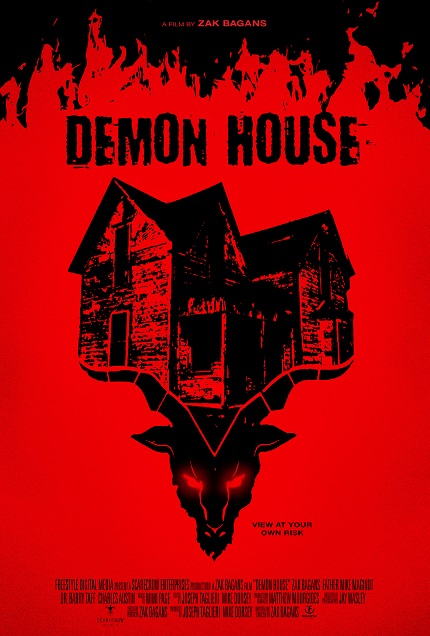 Premiering in 2008, Travel Channel’s Ghost Adventures has been a tour of allegedly haunted locations in the US and abroad for ten seasons and counting.

Host Zak Bagans has earned a reputation as the “bad boy” of paranormal investigation, the guy who defies and mouths off to spirits on a regular basis. This confrontational attitude has earned him the ire of more than one ghost; during an overnight stay at Bobby Mackey’s Music World in Kentucky – long thought to be a direct portal to Hell – he ended up with some pretty nasty and unexplained scratches on his back.

Bagans now takes his particular brand of paranormal investigation to the big screen in Demon House and in many ways, it functions as a full-length episode of the show, only with a bigger budget, less reality TV-inspired theatrics (the host is pretty subdued here, no name-calling angry spirits this time), and non-bleeped cursing.

It starts out the same way: Bagans buys a house in Gary, Indiana, reported to be another portal to Hell infested with demons, a source of a large number of documented possession cases in the United States. The host-turned-director interviews former occupants of the house, all of whom have had a paranormal experience of some sort, and finally, in the style of his TV show, decides to spend the night and confront whatever’s there by himself.

Bagans successfully manages to blur the lines between fact and fiction. The film is too polished to function as a fly-on-the-wall account, and its reliance on recreations using actors leans too heavily on the fictional side; yet, one quick glance at Google tells you that most of what is being presented here actually happened, including a possession, a failed suicide attempt and the unexpected death of a friend and colleague of Bagans. Even though it’s presented in the style of a typical horror movie, it’s all documented fact, and one will be left wondering just how much of this is real and how much is fabricated.

What’s definitely real is the atmosphere: Gary, Indiana is a place with a very high crime rate and where nearly half the population lives below the poverty line, and Bagans milks the desolate, dilapidated houses and wintry downbeat setting for all it’s worth. This has a subtle creepiness which slowly worms into you, and by the time Bagans locks himself in the house, boards up the windows and sets up the cameras, one can be forgiven for watching this on mute with the lights on.

It all works because the director understands the “less is more” rule of horror movies; other than a quick glimpse of a shadow on a wall, any paranormal activity is left to the viewer’s imagination, and we all know that whatever the mind can think up is much scarier than any creature, which makes the demonic goat-man running around in some insert shots completely unnecessary.

Demon House is an effective chiller that proves real life can be ten times scarier than any horror movie. There’s no reason given for why an ordinary and rundown suburban house is such a font of evil, but if you’re a believer in the paranormal and you’ve been following Bagans since Ghost Adventures¸ you’d have no reason not to be interested in this big-screen version. It’s a moody, sometimes melancholy ride for ghost story enthusiasts.