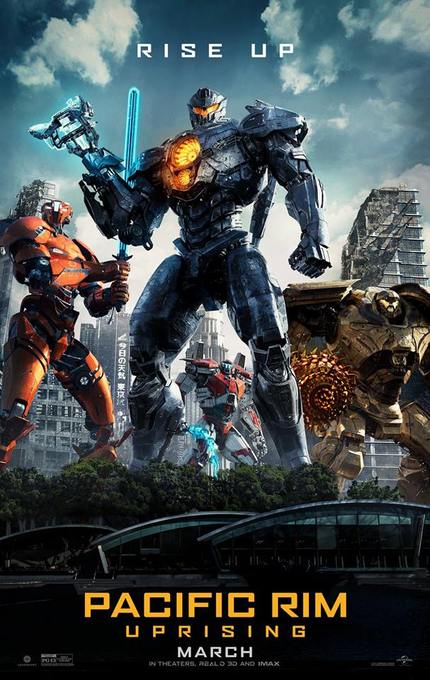 Once in a while it's good to ground oneself in this trade.

Even though I am first and foremost a movie fan, there's something about going into a press screening of a film -- even one I'm pretty excited about -- that forces my brain to start looking for the cracks between the brushstrokes. I'm not going to lie, sometimes it saps the joy from what would otherwise be a fun experience, but in this world where everyone is a critic and immediate impressions are shared, often before the end credits are done rolling, we've been trained to believe that if we don't find the flaws in the work, we aren't looking hard enough.

Pacific Rim Uprising, the somewhat troubled sequel to Guillermo del Toro's robots versus kaiju spectacular, itself released five years ago, is a film I've been trepidatious about ever since it was announced, and the promotional materials did little to assuage those nerves. Even though del Toro's film wasn't exactly a model of considerate, nuanced filmmaking, there was a certain po-faced earnestness to the proceedings that made it work in an old-school kinda way. Black was black, white was white, and while the heroes occasionally struggled to muster up their courage, there wasn't any room for turning their backs on destiny.

Director Steven DeKnight, working with a trio of co-writers, including veterans of other recent genre projects like The Maze Runner series and the TV series The 100, takes a stab at the world ten years after the events of Pacific Rim. The sequel finds a world struggling to pick up the pieces from the devastation brought by the interdimensional, alien-engineered giant monsters and their battles with the man-made mechanical behemoths known as Jaegers. Things are different now, and not always in a good way.

The newest crew of Jaeger pilots are completely different from the ones who saved the world last time, and unfortunately, those guys were always going to be difficult to replace. In the place of the dynamic and commanding leader, Stacker Pentecost (Idris Elba), we get the smarmy Nate Lambert (Scott Eastwood, channeling a cross between a pair of smarm-pros, his father Clint and Kurt Russell), and in the place of the plucky kid with a lot of talent and not much discipline played by Charlie Hunnam in the first, we see Jake Pentecost (John Boyega), the son of the former leader and a man thoroughly uninterested in any of this crap.

The first hour or so of Pacific Rim Uprising does a surprising thing by all but abandoning the basic concept of the series, leaving the Jaegers to fight among themselves without a monster in sight. The world had been without a monster attack since Stacker Pentecost sacrificed himself a decade earlier, though, so who else was left to fight? It's a strange idea that doesn't make a whole lot of sense until far too late. However, when the plot begins to unveil itself, it's almost too ridiculous to not enjoy.

This is where I had to take a step back.

Usually when I go to the cinema with the intention of writing about a film, I'm alone. This time I decided to bring my 13-year-old son, who is a bona fide kaiju expert and exactly who this film is made for. My boy has posters of kaiju movies lining his bedroom walls, he has dozens of action figures, models, masks, comic books, and DVDs of Godzilla movies, hell, he even writes and draws his own Godzilla comics sometimes. Truthfully, if I had gone to see this movie without him, he might have kicked my ass for it. But there as another reason I wanted him there, I wanted his point of view. 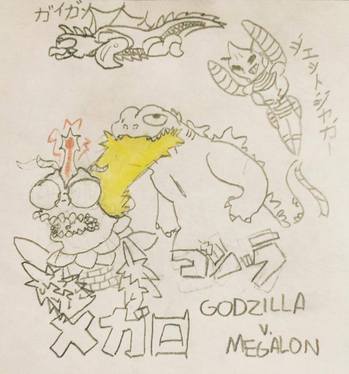 So we talked. We talked about the film's strengths, its weaknesses, what he liked, what he didn't like, and why. It's not that I'm trying to turn my son into a film critic, it's just that I wanted to have that point of view from someone without any kind of predisposition for picking the film apart. What I didn't expect was to have such an interesting conversation about this film that is by and large a big fluffy action extravaganza.

The film is not without its troubles. Both my son and I were kind of annoyed by some hackneyed dialogue, overly expository asides that derail the intertia of the plot from time to time in order to explain the reasoning and motivations of characters that reach back into the events of the first film. I found it to be eye-rollingly bad when Newt (Charlie Day, reprising his excitable scientist role from the first film) literally talks the audience through the events of Pacific Rim in order to set up his eventual role in this sequel, but my son said it didn't bother him.

We both agreed that while the main Jaegers in the film are well constructed and distinctive enough to tell apart at a glance, their pilots are mostly anonymous, even though they have plenty of dialogue. The only ones who really stand out are Jake, Nate, and a scrappy young recruit and amateur Jaeger engineer named Amara (played by newcomer Cailee Spaeny). There are nine pilots altogether, though, which means that the other six make almost no impression apart from vague generalities like the 'mean girl,' or the 'funny guy.' However, the film really isn't about the pilots, so that's okay.

On the other hand, we were both a bit confused by the monsters in the film. My son, the kaiju fanatic, pointed out that these kaiju are very hard to distinguish from one another. It's like the creature designers were so concerned about making them seem alien, they didn't stop to think about how to make them memorable.

As a result, no single kaiju stands out, and even on the drive home from the film, we couldn't remember a single distinguishing aspect of any of them, apart from the big boss at the end, but that's a fun surprise I won't spoil. Their physiology is so alien that you can't really tell what's going on, making it kind of hard to be scared or intimidated of them on their own. At least in Pacific Rim the monsters were distinct; here, they all just seem like angry conglomerations of tentacles and teeth.

I did try to initiate discussion with him about some of the things about the film that I found odd or underexplored. For example, there's an opening that teases a world in which coastal areas devastated by the earlier battles struggle to regain a sense of normalcy that seemed like it could've been interesting.

There is also the question of collateral damage that is almost completely avoided in the film as major cities are almost completely levelled with no more consideration for their citizens than a throwaway line about "evacuation" being complete, when earlier in the same scene it is very clear that evacuation was NOT complete. However, none of this seemed to bother my son, which I totally get. He was there for the monsters and robots, and monsters and robots he got, and with enough creativity that I can honestly say we both saw things we've never seen on the big screen.

Yes, the film's dialogue is often groan-inducing. Yes, most of the side characters are completely anonymous. And, sorry, John Boyega is no Idris Elba. However, I've gotta say I had fun, especially in the final act when everything goes completely insane. The battle sequences in the first film were often criticized for being staged almost entirely in the dark and/or the rain, but here everything appears in daylight.

It doesn't really help with a sense of action geography, but at least the features of the Jaegers are easier to see, even if the kaiju are still tough to distinguish. Still, it's an improvement. Not to mention the fact that the final 'boss fight' is so ridiculous and some of the action downright stupid that it's hard not to smile. And smile we did, because that what we do when giant robots punch giant monsters.

Do you feel this content is inappropriate or infringes upon your rights? Click here to report it, or see our DMCA policy.
John BoyegaPacific RimScott EastwoodSteven DeKnight