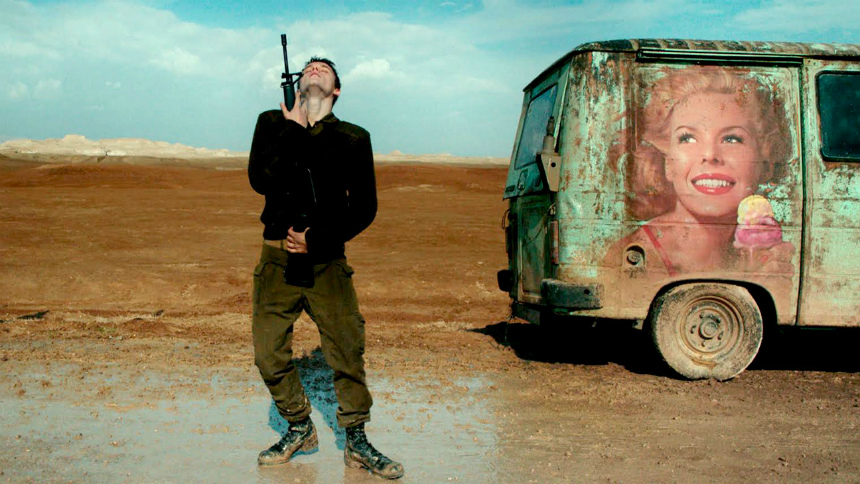 It's no secret that I am a big fan of the Eurimages funding scheme and the projects it backs, and Foxtrot is no exception. This dark, multi-tonal Israeli, French, German and Swiss co-production carries all the hallmarks of a good psychological thriller.

As a fiction, it all starts rather open-endedly. Under a stunning, pink sunset, we jerkily advance along a rugged path through a vast, expansive nowhere. We follow the motions of some vehicle, but it is never apparent or explained what kind. In front of us, the road channels your eye towards a central vanishing point, where the asphalt distantly dips and disappears over the brow of a hill. Immediately we are placed in director Samuel Maoz's capable hands, and he pays scrupulous attention to how the framing of his shots will influence our thoughts and feelings.

Next, like awakening suddenly from a dream, a jump cut slams us into a front door, which opens to reveal Daphna Feldman (Sarah Adler). Behind her sits a large piece of modern art on a big square canvas. It spirals around her into a tunnel of dark, abstract shapes, and it produces yet another striking and emotive vanishing point that mirrors the first.

This directorial sleight of hand instantly lures you into the film's space, and leaves you completely spellbound by why an awful look of sudden terror has just fallen over Daphna's face. With mysteriously little explanation, she faints and begins to convulse into a fit as three Israeli soldiers stoop to drug her and ensure that she is okay.

As the realisation slowly dawns on us what these military officials' presence must mean, we see a silver-haired, brooding Michael Feldman (Lior Ashkenazi) standing bemused, across the hall in a moody, dark adjacent room. He looks like he has moved too quickly between expecting suddenly to have to fight and the sad realisation that the officers must be there bearing bad news about their son. In fact, his visible shock does not go unnoticed by the soldiers, and they tell him that his son, Jonathan, died in action, before beginning to bark instructions and sling advice at him.

As the shock slowly radiates across Ashkenazi's face, one of Foxtrot's many unusual scenes then ensues. The soldiers force Michael to focus on drinking water in a way that almost suffocates him, and they then commandeer his phone to set regular reminders that he should keep on drinking throughout the day. Time and time again, this kind of deeply oppressive, misplaced dark irony or absurdity is applied to the actions of the Israeli Defence Force, and it turns Foxtrot into a fascinating scrutiny of the conflict that continues to unfold in Israel and Palestine. 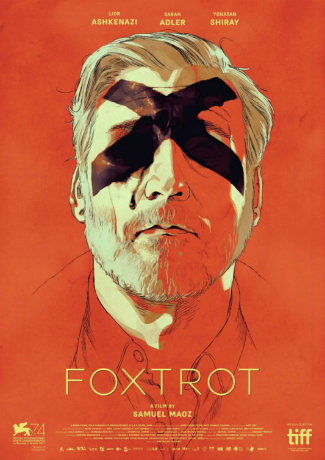 Before the film fully gets into this satirical stride, though, it first delivers a powerful study of Michael's absolute grief. In these moments, Maoz's use of space and his set is a complete dramatic masterstroke. The walls are already a dark, ashen green-grey, casting a deep, melancholy shadow over the film's opening compact scenes, but beyond that, the Feldman's apartment is full of regimented squares and tessellated tiles, creating this brilliantly overpowering sense of inescapability.

One scene that is particularly remarkable films Ashkenazi from above, whilst the tiles beneath his feet create the impression that cubes are rising up beneath him everywhere. The camera begins to rotate, as Michael slowly struggles to move across the room, and an optical illusion is created that makes it seem almost as though even though he is moving, he cannot actually move at all. Instead, the character appears to remain painfully trapped both in his grief and in the harsh military world that seems to box him in from all angles.

Generally speaking, in fact, Maoz's use of space and depth in Foxtrot is superb, and it also helps add another layer of absurdity to the piece too. For example, when Michael visits to tell his senile mother the news, we first see her dancing in a line of partners, oddly framed and distant from our view. Meanwhile a young dance teacher begins to cha-cha-chas happily into the foreground, completing the scene as one that brilliantly and darkly clashes with Michael's own sentiments from every possible angle.

There are several more stings in the tail of this film's irony too, and it actually soon comes to fruition that a number of things that we have been lead to believe are not actually true. At this point, Foxtrot does a bit of an about turn on itself and switches to the son's perspective, filling us in on what exactly it was that Jonathan was doing on mission "Foxtrot."

What we see is a unit carrying out a somewhat surreal and absurdly meaningless border patrol at a check point completely in the middle of nowhere. This is no heavily fortified, military-grade Israeli position, either, it's a much more unimpressive, warts-and-all hotchpotch of disused vans and abandoned haulage containers.

The mise-en-scene is once again glorious in this setting, and the location where Jonathan finds himself seems mysteriously stuck in bygone decades. He and his fellow soldiers fiddle with an assortment of low-fi radios, blaring out dated songs as best they can, and adorn the walls with murals with images of places and women they would rather be enjoying there time with. It is a decidedly weird world of pointless military service that Maoz creates, where the most useful thing they seem to be able to do is repeatedly lift a roadblock for a solitary passing camel.

And this small world of paranoid boredom also seems to have an almost supernatural element as the soldier's billets slowly and mysteriously sink into the sand. There is also a wonderfully zesty scene where the soldiers begin dancing an actual foxtrot to alleviate their boredom. Slowly, elements of what the soldiers and the grieving family also start to resemble or parallel one another emerge too, and this world of the Israeli-Palestinian conflict comes to seem ever more and more maddening.

Gradually this all builds to one final counterpoint, which I refuse to spoil for you. But I will say that you should keep an eye out for it, because it is perhaps a bit badly signposted. Nevertheless, this ultimate twist sees Foxtrot begin to unravel or contradict itself. And at times this is a bit confusing, but the helpless, dream-like, uncertainty that this film creates in you as a viewer definitely makes it worth watching. Its quirky twists and ingenious use of space and setting within a frame also definitely make it a festival highlight for me so far.

Review originally published during the Venice Film Festival in September 2017. The film opens in select theaters in New York and Los Angeles via Sony Pictures Classics on Friday, March 2.

Do you feel this content is inappropriate or infringes upon your rights? Click here to report it, or see our DMCA policy.
IsraelLior AshkenaziSamuel MoazSarah AdlerYonatan Shiray