Now on Blu-ray: UNDERGROUND, One of the Funniest Movies About War, Ever 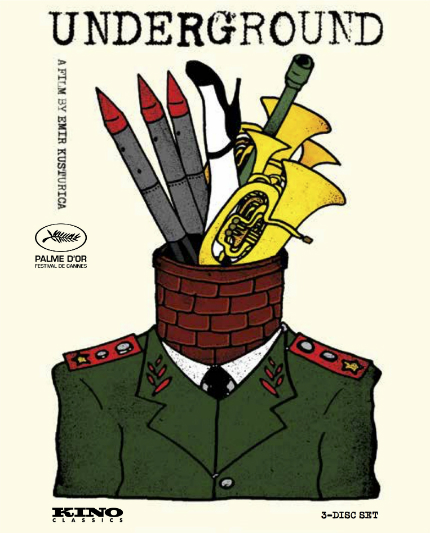 Emir Kusturica won his second Palme d’Or for Underground. It’s about three hours long and tells an epic story that begins in WWII and ends during the Yugoslavian Civil War in the 1990s.

But forget any worries about a deadly dull history lesson. This is one of the funniest, if not the funniest movies about war ever made. Blacky and Marko are lifelong friends whose lucrative war profiteering supplying arms for the resistance fighters is endangered by their shared love for  Natalija, a famous actress.

After the chaos of war forces them to move their arms building and dealing literally underground Marko sees a chance to get Blacky out of the way. He spends years convincing the underground factory workers and Blacky that the war is still in full swing on the surface while he and Natalija enjoy the reputation of war heroes, rising in the government ranks. All is well until Blacky realizes he’s been had.

The performances of Predrag 'Miki' Manojlovic as Marko, Lazar Ristovski as Blacky and Mirjana Jokovic as Natalija are inspired, the stuff of manic brawling slapstick, and they’re supported by a production design that has them sharing the ruins of war and vintage newsreels with escaped zoo animals, makeshift contraptions fashioned for daily life in the underground, innumerable oddball characters and a brass band that follows them almost wherever they go.

The impact is so unique that comparisons will fall short, but start out imagining what Jean Pierre Juenet and Mel Brooks might have got up to together and you’ll be on the right track. This is subversively zany wildly energetic and vital.

If you want to explore the full range of riches available on Kino's three disc, Region A set of Underground, it’s going to take a long time. Before you even get to the extras offered, you’ll need repeat viewings just to mine the film for pure enjoyment. Emir Kuturica's Underground is presented in two versions: a 170 minute Blu-ray cut, the best the film has ever looked and a whopping 327 minute, six part TV version on DVD. This is subversive, zany, wildly energetic and vital.