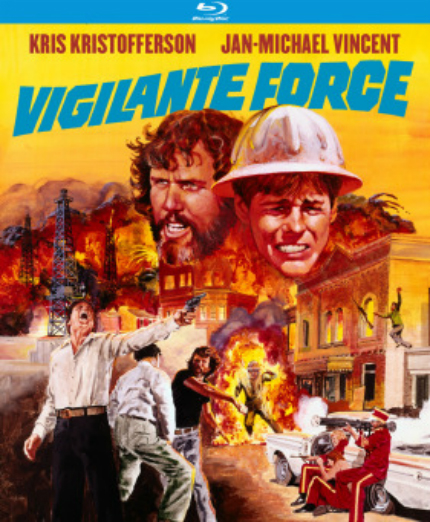 As we edge into a world where Hollywood blockbusters threaten to consume every weekend in every theater in every country throughout the world, it's a relief to sit back, relax, and watch Vigilante Force (1976), which is far more entertaining than I ever could have imagined.

Released on a sparkling Blu-ray by Kino Lorber in September 2015 (and it's still available!), the disc features a fabulous audio commentary by director George Armitage with filmmaker Elijah Drenner (That Dick Miller, a very good documentary). I enjoyed the film so much that I immediately watched it again so I could listen to the audio commentary, which is a great bonus because Armitage is genuinely witty and warm, and Drenner prompts him with the type of questions that I imagine I might have asked, such as, 'Why have you made so few films over the years?'

Indeed, Armitage's resume includes just seven films as a director, starting in 1971 with Private Duty Nurses and stretching to The Big Bounce in 2004, which I believe was the first film of his that I saw. Soon I caught up with Private Duty Nurses and Miami Blues (1990); the latter is a film I love without reservations. His best-known film is probably Grosse Pointe Blank (1997), starring John Cusack.

Armitage's films are so delightful that it makes me wish there were more to explore. He began as a writer for Roger Corman's Gas! (1970) and followed that up by writing and directing the aforementioned Private Duty Nurses as well as Hit Man with Bernie Casey and Pam Grier, also his first feature for producer Gene Corman, Roger's brother. Gene Corman came up with the title for Vigilante Force and then left it to Armitage to write a screenplay.

Writing in 1975, Armitage was inspired by the recent conclusion of the Vietnam War and stories about military veterans finding their return to the U.S. to be far more problematic than anticipated. He also had in mind the upcoming U.S. Bicentennial in 1976. He set the story in the fictional small town of Eagle Falls, California, where oil-field reserves have recently been opened up.

Some 2,000 workers have swarmed into town, bringing with them a propensity for fighting. Nefarious types have opened an illegal gambling den, which brings with it a wave of rowdy activity. It's all far more than the tiny police force can possibly handle, so the city fathers ask local, upright Ben Arnold (Jan-Michael Vincent) to induce his older brother Aaron, (Kris Kristofferson), a military vet, to return to town, join the police force, and help bring order.

It's a desperate plan, but Ben goes along with it, believing that his formerly wild brother has been tamed by his military service. Aaron finds the idea agreeable, and there is no objection when he brings along a handful of his ex-military buddies. They start to rein in the general disorder that has broken out, but could they have their own, not so legal objectives?

The charisma and charm of musical star Kristofferson translated well to the big screen and he began scoring film appearances early. Alice Doesn't Live Here Anymore raised his screen profile further, and also he accepted the lead role in Vigilante Force, the rest of the cast fell into place easily, according to Armitage, because everyone wanted to work with him.

This was just before A Star Is Born, and Kristofferson underplays his role here nicely. He's capable of suggesting darker currents that flow beneath his character's surface, which makes him a figure who easily commands power.

Vincent had costarred effectively in The Mechanic with Charles Bronson and Bite the Bullet with Gene Hackman, and was quickly landing lead roles in popular, lower-budget films like Buster and Billie, Jonathan Kaplan's White Line Fever and Baby Blue Marine. Here he plays a ramrod straight widower with a young daughter and he can't quite believe that his brother would ever do anything wrong, even as the evidence quickly piles up.

As his loving girlfriend Linda, Victoria Principal brings something extra to an essentially thankless role. The real find for me, though, was seeing the very talented singer and actress Bernadette Peters as a really bad singer. She's portraying a woman who wants something more out of life, and is naturally attracted to the rogue Aaron. Yet she appears to be a ditz and is constantly diminished by the men around her.

It's not until later that her character is fully revealed; a short sequence with her and Ben is eye-opening in its quiet dignity. It also kick-starts the third act, which becomes a rousing affair, filled with amazing action that would help earn the film a reputation as a wild and crazy thing.

And it is that, but from its opening scenes, Vigilante Force is also a lot of fun to watch in its dramatic sequences, with steadily unpeeling layers of social commentary along the way, somehow never slowing down or choking the propulsive narrative. Running a brisk 89 minutes, the film is an easy recommendation for these troubled times.

70s Rewind is a column that allows the write to ruminate on his favorite film decade.

Do you feel this content is inappropriate or infringes upon your rights? Click here to report it, or see our DMCA policy.
Bernadette PetersGeorge ArmitageJan-Michael VincentKris KristoffersonVictoria Principal